A struggle like no other Violence against women in capitalist society 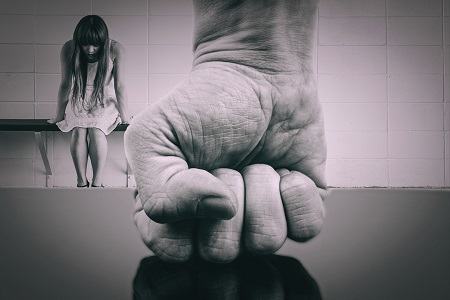 Violence against women is an ever prevalent and underlying norm in our society. It can be broken down into many facets. From second-rate treatment in the workplace to domestic, economic and sexual violence, a common thread connects them all — the system that engenders such suffering: capitalism.

In capitalist society, we are told (read lied to) that women are treated the same as men. In reality, on average women get paid 78 cents for every one dollar a man makes and women of color make even less. We are stereotypically addressed as ‘honey’ and ‘sweetheart’. I’m NOT your honey or sweetheart. We are told (read lied to), that we are respected, yet we are constantly portrayed as sex objects on TV or in magazines — whose covers simultaneously proclaim, “10 Ways to Look Good for Your Man!”

While men can easily get away with hooking up with however many women as they’d like, women are ridiculed by being called “hoes” or “sluts.” We are most certainly the first to have fingers pointed at us if we are assaulted or raped. The police, judges and media say: “Well what were you wearing? Were you asking for it?” These are common norms that do nothing but perpetuate patriarchy yet women are just expected to deal with it. Well I must say that I’ve had about enough!

We live in a society where domestic violence, defined as aggressive behavior involving the violent abuse of a spouse or partner, is supposedly “frowned upon,” yet it continues to occur everyday. In the United States, one in three women have been or will be victims of physical violence by an intimate partner within their lifetime. On average, there are more than 20,000 phone calls placed every day to domestic violence hotlines nationwide.

Many women also struggle with economic violence, in which their spouse or partner has full control of bank accounts and finances, leaving women with no means to survive without their abusers. Moreover, since the welfare reform legislation of 1996 slashed welfare funding by billions of dollars, poor women have found themselves without access to proper assistance. This then leads to poor women who’ve escaped their treacherous homes becoming homeless due to the lack of affordable housing or access to monetary funds needed to survive. The economic and social reality of capitalist society means that women frequently are forced to stay with or forced back with abusive partners because there is no economic or social support for their freedom.

Do you feel respected yet? I certainly don’t.

Sexual violence, which can include sexual assault, rape and sexual abuse, is prevalent in our society as well. In the United States, one in five women have been — or will be — raped in their lifetime. Almost half of reported female victims were raped by an acquaintance. Of these, almost half again of female victims were raped by an intimate partner. These numbers, however, do not account for the over 60 percent of sexual assaults that are not reported to the police for fear of retaliation, victim blaming or just plain fear of the police themselves.

The constant and pervasive violence against women is appalling and egregious. It is, in fact, the status quo in this capitalist, patriarchal society. The mistreatment of women has to be stigmatized in order for society to believe the lie that violence against women only happens to a few. In reality, all women face some facet of aggression and violence in their lives. Working-class women and women of color bear the full brunt of the oppression. Keeping half the population feeling burdened, overwhelmed, lacking confidence and weak is not a mistake or side product of the system. It is an integrated element of a system that breeds division and oppression. The oppression of women threatens our unity and reduces the possibility of a movement coming together to challenge the system that produces incredible profits for a few through the exploitation of the many.

This is in fact why racism, sexism, homophobia, xenophobia, and so on continue to exist in order for capitalism to flourish.

What has not been taken into account, however, is the strength that causes women to rise up despite the stones set on top of them. Women have made extraordinary advances despite the oppression inherent in class society, throughout decades of massive fightback movements.

A great example of past heroines is the story of Gold Flower (English for a woman’s name, Kinhua). In 1945, during the Chinese Civil War between the Communist-led revolutionary movement  and the nationalist forces, a struggle for women’s liberation was also brewing. With a small push from the Red Army, a women’s association was formed. Kinhua, a peasant woman from the small town of Hopei, who was forced into an arranged marriage despite her love for another, stood up to her abusive husband and father-in-law with the full backing of the women’s association. Both her husband and father-in-law were tried under a people’s court for their physical abuses against her. The women’s association took the situation into their own hands, and beat both husband and father-in-law into submission to the new society. Because of instances like this, Kinhua and other former victims were able to take back their lives. It was the movement that they joined that turned the despair of being a woman in a man’s world into hope and pride.

The movement to support Marissa Alexander, sentenced to 20 years in a Florida courtroom in 2012 for firing a warning shot to stop her abusive husband from further assaulting her, is a more recent example of the power of a collective struggle. Marissa was a victim of both domestic abuse, and a racist, unjust legal system. A movement took to the streets and the Internet to demand a re-trial. Because of the courage of thousands of women and men, Marissa was granted a new trial where her sentence was reduced from a possible 60 years to time served and two years of house arrest.

It is the power of women fighting together in a collective mass struggle that have and will continue to propel the women’s movement forward and fight the ever-consuming system of capitalism. It is clear that women deserve better than how they are currently living. We deserve to live in a society where we actually are treated equally, where victim blaming is a rarity and respect actually means something. Our voices matter and we urge all readers to join the revolutionary movement in order to fight against a fundamentally oppressive system — capitalism.