August Rebellion and a historical moment in prisoner resistance 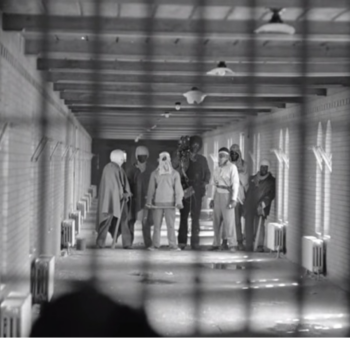 Incarcerated women have a long legacy of resisting inhumane conditions, fighting for human rights and exposing exploitative prison labor that are characteristic of the U.S. prison system. The August Rebellion of 1974 in the maximum-security Bedford Hills Correctional Facility in New York State exemplifies the resistance of incarcerated women.

Prisoners themselves often lead the way in winning reforms for incarcerated women. Such was the case of Carol Crooks, the inmate at the heart of the August Rebellion. Carol Crooks (1947-2016) was sentenced to 15 years for first degree manslaughter and arrived at the Bedford Hills Correctional Facility in 1974. During her stay, she vocally opposed the mistreatment of inmates by prison staff and was frequently hostile to them.

In the months before the August Rebellion, a litigation struggle set the backdrop for the righteous riot. In February 1974, several prison guards at Bedford Hills accused Crooks of assaulting them. Crooks was immediately dragged into solitary confinement, convicted of three counts of felony assault, had 2 to 4 years added to her 15-year sentence and was ordered to serve the remainder of her sentence in solitary confinement.

During this time, without due process or a hearing for her charges, Crooks received support from other women prisoners including Cindy “Sid” J. Reed and Afeni Shakur, a Black Panther. Given the proximity of Bedford Hills to New York City, Shakur was able to connect Crooks to lawyer Stephen Latimer. In the subsequent lawsuit Crooks v. Warne, the women argued that they were entitled to due process before the prison made punitive transfers to solitary confinement. In July 1974, the judges ruled in Crooks’ favor which won the rights of the incarcerated women to due process before being sent to solitary confinement. The victory also resulted in Crooks being released from solitary, and she returned to the general population at Bedford Hills.

After the court ruling, many inmates regarded Crooks with respect and saw her as a champion of their cause. The prison staff, however, had an entirely different view. On August 29, 1974, after dinner, Crooks got into a physical fight with another prisoner. Even though the event was short-lived, the prison authorities responded by sending a squad of male correctional officers clad in riot gear from a nearby prison. These officers forcibly entered Crooks’ cell, handcuffed her and threw her down the stairs before taking her away in a station wagon, all the while beating her as she remained incapacitated and outnumbered. This extreme display of violence was perceived by the other inmates as a retaliation against Crooks for her lawsuit victory.

The next day, on August 30, a New York Times article read “45 women inmates at Bedford Hills Correctional Institution held seven employees ‘against their will’ for 2-1/2 hours last night. … they surrendered of their own volition.” Two hundred inmates, led by Sid Reed and Dollree Mapp, had occupied two prison buildings and an adjacent prison yard for two-and-a-half hours. Mapp was a leader in her own right who won a 1961 Supreme Court decision in Mapp v. Ohio that required state courts to exclude evidence that has been obtained illegally.

The rebelling inmates repeatedly demanded proof that Crooks was alive and that the press and lawyers needed to be brought into the prison. They “held off the guards by gathering tear gas canisters and used them to fight back against the guards attempting to enter,” according to a 1974 article by Amber Baylor. The rebellion was only suppressed after additional state troopers and correctional officers were brought in.

No reports on Carol Crooks were available until a week later when she was found to be severely injured and in solitary confinement. Reed and other participating inmates were sentenced to one year in solitary for the rebellion, and Crooks to two years. Given that the victory of Crooks v. Warne only applied to Crooks, the women asked Latimer to file another lawsuit on behalf of all women at Bedford Hills. This legal victory, Powell v. Ward, secured their release from solitary confinement in 1975 and called for due process in all disciplinary hearings. Six years later, after Bedford Hills ignored the initial court decision, the women received a monetary settlement of $125,000 that they used to reinvest in prison programming.

The August Rebellion was monumental, especially in light of the Attica prison uprising just three years earlier where inmates demanded better living conditions and political rights, and which catapulted prison uprisings into mainstream public consciousness. To this day, the August Rebellion protects women prisoners from arbitrary and excessive segregation in solitary confinement. In other places such as North Carolina in 1975, women held a sit-down demonstration for medical care and to close the prison laundry that escalated into an uprising when prison guards attacked them. Such prisoner-led uprisings continue to be critical moments in the resistance to a ruthless system that thrives on oppression.

In the present day, the struggle for basic rights and decent conditions continues. The 2016 and 2018 prison strikes commemorated the Attica uprising and, almost four decades later, called for an end to exploitation and wage theft within prisons. In Arizona, incarcerated women organized to bring attention to the use of cages in prisons, including more than 600 outdoor cages used to restrict the movement of prisoners or hold them as they awaited medical appointments, work, education or treatment programs. The women at Bedford Hills and in all prison struggles help advance the struggle for prisoners’ rights and the right to dignity for all people.