A women’s demonstration, two revolutions and the birth of a socialist state 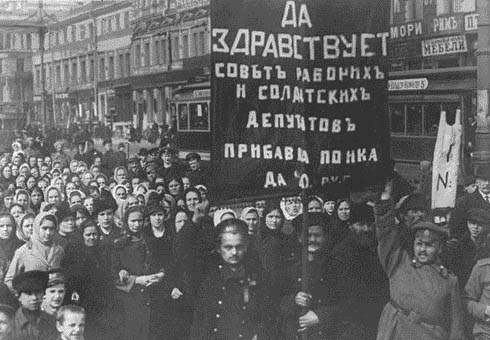 The following first appeared in the Spring 2020 issue of Breaking the Chains magazine, which you can purchase here.

We must not underestimate the immense revolutionary power of women to ignite, fight, and win. The 1917 Russian Revolution that established the first socialist state in the world had two revolutions: one in February and one in October. The February revolution electrified the masses, sending a shock throughout Petrograd and beyond. It forced the Tsar to abdicate. It set the stage for the October Revolution.

The revolution was initiated by a demonstration of women.

Russian women in the early 1900s were doubly-oppressed. They were mothers subject to the rule of their husband, providers for their children with all their various needs, and keepers of the house. They were workers subject to the rule of their bosses, forced to accept long work days, arduous conditions, and pittance pay. The war left millions of women responsible for families, homes and the injured with few resources. Literacy among women at this time was at about 13 percent.

Strikes in the Soviet Union increased in both frequency and intensity beginning in 1915. The food crisis, low wages, and inflation impacted women in numerous ways and inspired many to strike. In December 1916, women working in munitions plants protested the pay gap between men and women.

By 1917, women comprised at least 40 percent of employed workers. All their economic and social woes were heightened by World War I. Military defeats, economic collapse and soaring food prices brought out a large number of workers, including women, in sporadic strike actions against their miserable conditions.

On February 23, 1917, 7000 women from the Vyborg District textile mill factory took to the streets of the Russian Capital of Petrograd to protest against the food shortages and the high price of bread. An estimated 90,000 men and women joined together by the end of that first day to demand:

Vehement opposition to the slaughter of millions, and the mass starvation and deprivation caused by World War I were key factors in the strike.

Throughout the next week, the strike spread among Petrograd’s workers. The vanguard women roused working-class men to join them by recognizing their shared opposition to the ruling class oppression. One significant victory was convincing 40,000 male engineering workers from the Putilov factory to join their cause.

As the crowds continued to swell and Petrograd came to a halt, thousands of soldiers, who were already stationed in Petrograd on account of the war, were ordered to quell the uprising. An estimated 1,300 people were injured or killed during this time. Yet even in the face of open fire, protestors stayed in the streets.

Working women continued to take leadership in the struggle, approaching the barracks and engaging with soldiers directly. Through flyering, agitation, fraternization and organized meetings they attempted to persuade the soldiers to join the masses in their fight. It worked: soldiers refused to fire on the demonstrators, and many joined the Revolution.

The Tsar was forced to abdicate. In just 8 days, centuries of the Romanov dynastic rule–which kept millions of men, women, and children illiterate, impoverished, and exploited–came to an end. On March 2, the Provisional Government was established, which included representatives of the capitalist class as well as more moderate socialist parties. Alongside the Provisional Government, another form of government arose in the soviets, which were institutions representing workers, peasants, and rank-and-file soldiers.

From February to October 1917

In July 1917, women over the age of 20 were formally given the right to vote and hold public office. November 1917 was the first opportunity for women to exercise this right and that they did. In some sections, such as Yaroslavl, women turnout outnumbered that of men.

Mass protests, strikes, and demonstrations continued. During this time, Bolshevik women played an important part locally and nationally. They distributed agitation leaflets, agitated throughout the East and among peasant women, and continued to spearhead strikes and demonstrations. Vera Slutskaya proposed the establishment of a bureau dedicated to agitating women and reviving the Rabotnitsa (The Woman Worker). The publication encouraged women to demand more, to participate in their local Soviets, and to join their fellow workers on strike.

Women benefited greatly from and played critical roles in the new socialist society. Immediately upon assuming power, the Bolsheviks passed legislation which made Soviet Russia the most progressive nation in the world on issues of gender. The December 29, 1917, decree gave women the right to divorce their husbands without obtaining his or any other permission, and legally ensured alimony

One of the most profound and immediate gains of the October Revolution was the new regulation of the workday. In 1918, The Code of Labor Laws limited the working day to eight hours for all adults, and to six to seven hours for people under 18 or those working in dangerous trades. Additionally, it guaranteed 42 hours of uninterrupted rest each week, and the elimination of child labor.

Within these laws were particular reforms for women workers, including maternity leave at full pay and additional allowances for breast-feeding mothers.

The regulation of the workday meant women were safer, had the opportunity to go to school, allowed more free time, and guaranteed a wage.

In November 1918 the First All-Russian Congress of Working and Peasant Women was held. The discussions laid the groundwork for what later became the Zhenotdel. Formed in 1919, The Zhenotdel was the arm of the Secretariat of the Central Committee of the All-Russian Communist Party responsible for issues of women’s welfare and dedicated to organizing women politically and recognizing their unique struggles. The Zhendotdel mobilized to fight illiteracy, the biggest roadblock to participation in politics. It published magazines directed specifically at networks of working women and peasants on current issues and theoretical topics.

In 1918, the Bolsheviks introduced the Family Code, which guaranteed additional rights including: abortion without the consent of the father, divorce, consensual marriage and to conduct her marriage and personal life as a secular being. The Code also required parents to take equal responsibility for “the maintenance” of children.

Women heroes in the struggle

Alexandra Kollontai played a leading role in the Bolshevik party. She organized amongst working women and helped articulate the conditions for women’s liberation. In 1914 she joined the Bolshevik Party. She was elected to the Central Committee in 1917 and was the first woman to take the minister’s position in the history of the country. She was a delegate to the First Congress of the Communist International, and an activist in the Zhenotdel.

Nadezhda Krupskaya was party secretary in the years when Lenin was in exile and had the indispensable task of maintaining contact between the party’s exiled leadership and those active in Russia. Following the October Revolution, she was appointed as the first Soviet People’s Commissar for Education. Her campaign was dedicated to raising adult literacy rates. Krupskaya served as the Soviet Union’s Deputy Minister of Education for over ten years.

In addition to being one of the founders of the Zhenotdel, Inessa Armand organized the Bolshevik’s campaign to get its supporters elected to the Duma. She was also the first leader of Zhenotdel and organized and chaired the First International Conference of Communist Women.

Konkordiia Samoilova organized in prison prior to the February Revolution. Samoilova is probably best known as the editor of Pravda, the Bolshevik party newspaper. In this role, she gave voice to the hundreds of workers, strike leaders, and trade unionists who would pass through her office in any given week.

While we name and celebrate these leaders, we must not forget the heroic contributions and the sacrifices made by millions of nameless working and peasant women who dedicated both body and mind to the liberation of workers and oppressed peoples. They lived and died at factories, in fields, on the battlefield, and on hospital beds. They worked as political propagandists and organizers, as public health workers, as caretakers, and as Red Army soldiers and commanders.

The Bolsheviks understood that equality under the law was not true liberation – the Soviet Union would have to change the social relations of women, offer full protections for all workers, guarantee an education, a job, and a home, and allow for the complete physical autonomy of women.

The Bolsheviks made this clear in point four of the 1919 Political Program of the CPSU (Bolsheviks) adopted March 22, 1919 at the Eighth Congress of the Russian Communist Party: “Not satisfied with the formal equality of women, the Party strives to free women from the material burden of obsolete domestic economy, by replacing this with the house-communes, public dining-halls, central laundries, creches, etc.”

The question of organizing and fostering militant working women was a major topic of discussion at the 1921 Third Congress of the Communist Third International. Later codes, programs, and regulations more deeply reiterated or expanded on these rights, and covered more issues which primarily impact women including prostitution, freedom of movement, and abortion. Abortion became fully legalized in 1920.

All of this stood in stark opposition to the bourgeois feminist perspective which primarily concerned itself with winning the right to vote and the right to property. Bourgeois feminism did not focus on the liberation of factory or domestic workers.

Capitalism today oppresses women economically, legally, and socially. Women are not guaranteed a home, healthcare, or an education. Women are forced, coerced, or otherwise obligated to sell their labor for less than it’s worth. The state and the media perpetuate the oppression of women.

Socialism, however, lays the foundation for the true liberation of women. It ensures at its very core a dignified life in which the things that are owed to us — the fruits of our labor — are given to us. The February Revolution showed the world the revolutionary power of the working class and of working women. Despite many contradictions and challenges, the gains the Soviet Union did achieve during its tenure reveals the possibilities and potentialities of socialism in a very real way.