From the Editor: From Capitalist Cage to Socialist Liberation 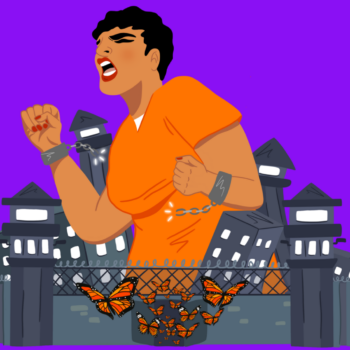 As you immerse yourself in the literature and reality of prison conditions in the United States, particularly for women but true for all working class people, it is easy to reach what seems a stunning conclusion: A large number of the 2 million people in U.S. prisons should not be there. U.S. prisons house millions of working-class people convicted of nonviolent offenses, ensnared in a system that punishes poverty within a context of deep institutional racism and sexism. Furthermore, the conditions are deplorable and a violation of human rights by even the most conservative standards.

Not only are a majority of women incarcerated for nonviolent crimes associated with poverty but many, if not most, are survivors of abuse and assault. One in four are in jails awaiting trial, meaning they have not even been convicted. Women are often criminalized and incarcerated for resisting sexual and domestic violence. Within the prisons, women suffer specific forms of humiliation and abuse that range from sexual assault and anti-trans violence to the denial of medical care and basic necessities.

The wealthy who perpetrate great crimes, some of which are even technically legal within the skewed U.S. judicial system, are rarely imprisoned. Jeffrey Epstein’s cushy arrangement in Florida is just one example of how the wealthy and powerful normalize and protect predators. Politicians who wage illegal wars abroad, responsible for the deaths and suffering of literally millions of people, never face consequences for those actions. It seems that, for the most part, the wrong people are in prison. There are some people convicted of extremely violent crimes of which they are in fact guilty housed in prisons. It would be naive to say otherwise. But the point here is that as an institution, the prison system, that incarcerates millions of people and exerts control over the lives of millions more caught in the probation system and post-conviction life, is fundamentally racist, sexist and anti-working class.

Talking about mass incarceration, especially in the United States, requires talking about 400 years of war on Black America. Because of the origins of policing and prisons, it means talking about enslavement, exploitation and genocide. It also means talking about the resistance of oppressed and exploited people. It is virtually impossible to discuss this without discussing the targeted attacks on the Black working class as well as the resistance of Black people to racism and oppression that often leads the way in affecting social and political change in this deeply racist country. The nationwide revolt against racism that exploded after the brutal recorded murder of George Floyd on May 25 has only made this ever more clear.

It is understandable why the call to abolish prisons has become more and more popular. The conditions are horrific. The institution is clearly racist and sexist. It serves the purpose of social control and repression that directly targets working-class and oppressed people. We certainly must fight for the achievable reforms to change the brutal conditions within prisons and limit the reach of the prisons themselves. We have to fight for the freedom of political prisoners. But under what conditions can we expect prisons to actually be abolished?

The liberation of women is concurrent with the liberation of our class and nowhere is that more clearly evidenced than in the conditions and role of prisons in U.S. society.

We seek to end the system of exploitation and oppression that is capitalism. To do so, we need a revolution. A socialist revolution can liberate the working class in its entirety. Socialism will create a new state that protects the interests of the working class, the majority of the people. Society can be restructured to meet people’s needs. A job, housing and health care will be a right. Policies and the promotion of racism, sexism and anti-LGBTQ bigotry will be outlawed. Our class will be empowered to develop new ways to resolve social contradictions among the people. The current system of prisons that is literally a concentration camp for the poor will be dismantled and replaced.