Historic hearings on Hyde Amendment renew optimism for its repeal 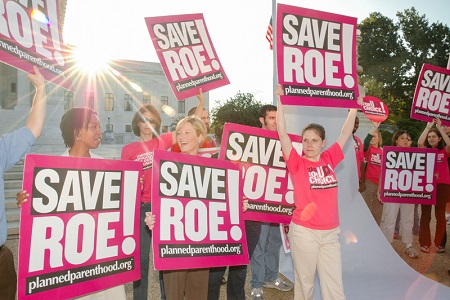 The Hyde Amendment, an infamous and far-reaching restriction on access to abortion, has prevented Medicaid recipients and working-class people from accessing abortion services for the last four decades. However, in a somewhat unprecedented move, the U.S. House Appropriations Committee recently held a public, virtual hearing on the disproportionate impacts the Hyde Amendment has had on working-class women and women of color. While it is yet unclear what next steps, if any, will be taken to dismantle the piece of legislation, the hearing (led by the Appropriations Committee’s incoming chairperson, Rep. Rosa DeLauro of Connecticut) highlighted the unjust consequences of the amendment.

The virtual hearing, which took place on December 8, provided a forum for organizations such as All* Above All as well as healthcare professionals from across the country to underscore the need for a full dismantlement of the Hyde Amendment. In a statement to the House Appropriations Committee, Dr. Herminia Palacio of the Guttmacher Institute wrote, “The Hyde Amendment intentionally leaves millions of people who are already struggling financially without abortion coverage. As of 2018, more than 7 million women aged 15–44 enrolled in Medicaid lived in the 34 states and the District of Columbia where abortion coverage was not available because of the Hyde Amendment.”

The Hyde Amendment, passed first in 1977, restricts the use of federal funds for abortion coverage, meaning that those who receive Medicaid and those who are employed by the federal government and receive health insurance through their employment are unable to receive coverage for abortion services. As Dr. Jamila Perritt (president of Physicians for Reproductive Health) points out, “The Hyde Amendment is a discriminatory policy that blocks those relying on federally funded health programs from getting coverage for abortion care. This includes people receiving their insurance coverage via Medicaid, the military, the Indian Health Service, people receiving care in federal prisons and detention centers, D.C. residents, federal employees, and Peace Corps volunteers.” In spite of the devastating impacts of the amendment on the most marginalized communities across the country, the House Appropriations Committee has renewed the Hyde Amendment annually since its initial passage.

For more than 40 years, the Hyde Amendment has been added and re-added to Congressional spending bills without significant internal opposition. Even President-Elect Joe Biden remained a staunch supporter of the Hyde Amendment until a sudden pivot on the campaign trail in 2020. The recent hearings held by the House Appropriations Committee signal a welcome shift among legislators.  Despite increasing reactionary attacks on abortion rights over the past decade, activists have continued to defend the right to abortion, and access to abortion. With powerful conservative lobbying efforts and a reactionary Supreme Court bench threatening to diminish progressive gains, it is all the more important that revolutionaries and feminists continue to demand expanded access to abortion services and full reproductive justice for all.

Hannah Dickinson, an organizer with the Party for Socialism and Liberation notes, “The Hyde Amendment is a direct attack on reproductive care for low income women. An estimated 42 percent of abortion recipients live below the poverty line and since the passage of the Hyde amendment, over one million low-income women have been forced to carry unwanted pregnancies to term. Rich women have always had access to abortion. The struggle for reproductive justice is a working class struggle. It is clear that we cannot rely on politicians—Republicans or Democrats—nor can we rely on the courts to uphold our fundamental rights. It is only with organized, militant pressure from below that we can ensure all women are able to access their legal right to an abortion.”

Because any repeal of the Hyde Amendment must be approved by both the House of Representatives and the Senate, it is likely that efforts on the part of the House Appropriations Committee to end the restrictive legislation will be met with opposition. Politicians who stand in the way of abortion access represent hypocrisy embedded in the abandonment of the working class. The Hyde Amendment does not prevent abortions from taking place, nor does it provide any barrier for wealthier women from accessing abortion services. Its only purpose is to further repress women of color and the working class.

In spite of the daunting tasks ahead, the need for expanded abortion access is more critical than ever. Pregnancy and childcare represent an enormous financial hardship for working class families. Indeed, one in four women with unwanted pregnancies are forced to carry these pregnancies to term because their health insurance (or lack thereof) prohibits access to abortion coverage.

Free and unrestricted access to abortion and birth control are necessary prerequisites to women’s full participation in society. In addition, women need access to the full spectrum of health care as well as jobs, childcare, housing and education to be able to truly choose whether or not to have a family.