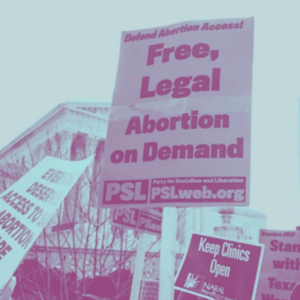 Since the U.S. Supreme Court sealed its approval for Texas Senate Bill 8 by refusing to intervene against the “heartbeat bill” earlier this month, organizations nationwide have geared up to oppose this egregious violation of reproductive rights. SB 8 makes it illegal for women to get abortions after six weeks of pregancy and allows “any person, other than an officer or employee of state or local government,” to bring a civil suit against anyone believed to have “aided or abetted” an unlawful abortion in return for $10,000 bounties.

Physicians are continuing to perform medically safe abortions in defiance of SB 8. Dr. Alan Braid, an OB-GYN based in San Antonio, Texas, publicly stated in the New York Times that he performed a first-trimester abortion, which exposes him to private lawsuits from practically anyone in Texas regardless of any affiliation with patient or physician. Subsequently, Braid was sued for an SB 8 violation by a former Arkansas lawyer disbarred for tax fraud. Additionally, reproductive services providers like Planned Parenthood and Whole Woman’s Health are facing increased threats of litigation against its staff and providers despite being in temporary compliance with SB 8.

The legal loophole to offer bounties will undoubtedly empower private vigilantes nationwide to systematically target abortion providers, people seeking abortions and those who support them. Unfortunately, this means working class communities will face the brunt of this regressive law and will increasingly suffer from already terrible healthcare disparities. Abortion providers have already highlighted how Texans are travelling hundreds of miles out of state to secure abortion access. Such travel is often not accessible for working class people.

Advocacy groups like Whole Woman’s Health have asked the Supreme Court to intervene urgently in their fight against SB 8 and to hear their case before the lower court ruling. The Supreme Court rejected the request citing procedural questions. It is clear that the Supreme Court majority does not care at all about the violation of reproductive rights and the immense harm SB 8 causes, and only cares about furthering its own conservative agenda.

On Sept. 24, in response to this extremist and regressive bill, the U.S. House of Representatives passed the Women’s Health and Protection Act 2021, which would federally protect the right to “access abortion care throughout the U.S. by creating a safeguard against bans and medically unnecessary restrictions.” It also protects “a person’s ability to determine whether to continue or end a pregnancy, and to protect a health care provider’s ability to provide abortion services.”

WHPA is expected to face an uphill battle in the Senate where the Democrats will need 10 Republicans’ support for the bill to pass. Major Republican lawmakers like Susan Collins have already opposed WHPA on religious grounds. Polling shows that only 30% of Americans support so-called “heart beat bills,” yet the Supreme Court and the majority of the Senate appear poised to side with a well-funded, reactionary minority, rather than the vast majority of Americans.

While WHPA is an important act initiated by the Democrats, history has shown that the Democrats are willing to make concessions in the name of bipartisanship while harming large sectors of poor working class communities. Even when they have full control of the legislative and executive branches of government, the Democrats are slow to move on passing progressive bills. Ever since the passage of Roe v. Wade, right-wing politicians have constantly attacked the decision; reproductive rights have been on the chopping block since. Roe was not a gift from a benevolent Supreme Court; as with Roe, only a militant women’s movement in the streets can pressure the Senate to enact WHPA into law, expand universal abortion access and end the charade of attacking women and other child bearers once and for all.