More than Pro-choice: Reproductive Justice for All! 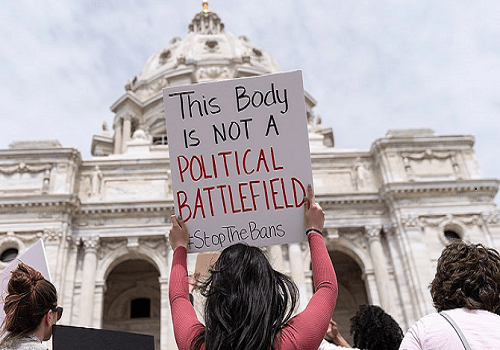 The “pro-choice” movement has focused on keeping abortion legal as an individual choice. This is necessary but not enough. Even when abortion is legal, many women cannot afford it, or cannot travel hundreds of miles to the nearest clinic. There is no choice where there is no access.

“Pro-choice” does not speak to the fact that most women need resources to be able to truly control their bodies and their lives. Social transformation is needed for the well-being of all women to be assured.

The current argument for reproductive rights advocacy, “reproductive choice,” does not address the pressing needs of millions of women right now. “Reproductive justice” is a different framework that women of color have developed to address these limitations. It advocates for equal access to reproductive rights for all women, and speaks to the different priorities different women have. It has the potential to bring thousands more into struggle, and to unite all women in a powerful and diverse feminist movement that speaks to the moment.

Reproductive justice is a unifying basis for struggle developed in recognition that the women’s rights movement, when led by and representing petit-bourgeois and capitalist women, could not defend the needs of working-class and oppressed women.

It was developed in 1994 by the group Women of African Descent for Reproductive Justice, based upon the universal human rights framework codified by the United Nations. It combines reproductive rights with social justice.

Three years later, the multi-ethnic group SisterSong formed to “create a national, multi-ethnic Reproductive Justice movement.” SisterSong defines reproductive justice as “the human right to maintain personal body autonomy, have children, not have children, and parent the children we have in safe and suitable communities.” This approach is more relevant now than ever because it goes further than “choice,” it’s about access.

There is no “one size fits all” feminism because women belong to both the oppressing capitalist class and the oppressed working class. Some women are CEOs who exploit other people, for example, while other women, the vast majority, are exploited workers. Many professional and wealthy women hire other women, primarily women of color and immigrants, to clean their homes and raise their children, often at low wages with few or no benefits. Hillary Clinton and a undocumented domestic worker don’t have the same reproductive “choice.”

From 1965 to 1979, struggles on the streets and in the courtroom won some 60 legal actions favorable to equal gender rights, including six Supreme Court decisions. Battles were won but the war waged on. The ruling class, which profits from inequities, disparities and exploitation, immediately started a counterattack.

Abortion was legalized in 1973, but just three years later Congress passed the Hyde Amendment, denying abortion to women on Medicaid. However, sterilization remained fully covered and very easy to obtain. For poor women, the Hyde Amendment effectively curtailed access to abortion, whether it was legal or not. It was the opening shot of the right-wing war on abortion and other reproductive rights. The moderate women’s groups did not rally to defend abortion rights for poor women, or to oppose coercive birth-control policies.

Opportunistic and mainstream feminist forces that see the women’s struggle as confined to “pro-choice” did not make a connection between reproductive rights and the 1990s attacks on welfare, or the prosecutions in that period for “using drugs while pregnant,” aimed mostly at Black women on public assistance. This not only left affected women bereft of solidarity, it also left the whole struggle for reproductive rights vulnerable.

The war on women

Today there is a full-scale war on the right of a woman to control her body and on reproductive rights for all. This war on women has also been coupled with a general assault on the working class since the overthrow of the socialist camp. Anti-choice groups are writing model anti-abortion, anti-birth control legislation that is being pushed by anti-women politicians on every level. Today there is a surge of litigation for “crimes” against a fetus. Roe v. Wade is threatened.

There has also been a resurgence in eugenic policies, and a move to use provider-controlled, long-acting contraceptives on poor women in order to reduce poverty, high school drop-out rates, and Medicaid costs. In California more than 150 Black women prisoners were sterilized between 1997 and 2010, many under pressure. The justification for this is as racist and anti-poor as any pronouncements from the time when eugenics ruled the roost. An OB-GYN, Dr. James Heinrich, at Valley State Prison for Women, said, “Over a 10-year period, that isn’t a huge amount of money compared to what you save in welfare paying for these unwanted children — as they procreated more.”

While the struggle of the 1970s struck down many eugenics law, the sterilization of women prisoners is legal. A Supreme Court ruling made in 1927 during the height of the eugenics movement, Buck v. Bell, states that women can be forcibly sterilized if they are in jail.

Not just about abortion

How do we fight to build a united movement that addresses all these issues, and anticipate the issues to come? Abortion access is critical, but working-class and oppressed women also often have difficulty accessing contraception, comprehensive sex education, STI prevention and care, alternative birth options, adequate prenatal and pregnancy care, domestic violence assistance, adequate wages to support our families, safe homes, food and care for our children, immigrant rights, and more.

Reproductive justice activists view abortion and other reproductive health services as resources that all people are entitled to — including education, food, housing and health care — and the right to live in an equitable and democratic society. True reproductive freedom requires a living wage, universal health care, and the abolition of mass incarceration.

Reproductive justice will be attained “when all people, inclusive of all immigration statuses, have the economic, social and political power and means to make decisions about their bodies, sexuality, health and families,” says SisterSong.

Reproductive justice is socially transformative, and not limited to getting rights within the legal framework of capitalism.

For example, the National Latina Institute for Reproductive Health uses a reproductive justice model in its work. Its stated vision is “to create a society in which Latinas have the economic means, social capital, and political power to make and exercise decisions about their own health, family, and future.” NLIRH serves a diverse Latina population, focusing on “abortion access and affordability; sexual and reproductive health equity,” but also adding as a major priority, “immigrant women’s health and rights.”

Reproductive justice speaks to the right to raise a family and the economic and social justice needed to do so. This means that stopping the police murders of unarmed people in Black and other communities of color is a reproductive right. Mass incarceration and police killing of both male and female oppressed youth violates the right of Black and other women of color to raise their children in healthy, humane environments.

A struggle based on reproductive justice can attract support from tens of thousands of women whose needs are not voiced within the limits of the “pro-choice” agenda — poor and working-class women, women of color, queer women, women with disabilities, and others.

How can we achieve reproductive justice? The struggle for socialism opens the path for achieving it. Poor, working class, disabled, LGBTQ folks and women face multiple oppressions, and we can only win freedom by fighting alongside each other for a new society that organizes its resources around meeting the needs of people and the planet, not around exploitation and dehumanization. We, as women and workers, are in a war against the ruling class that mobilizes to profit from our labor.

In war, we must pool our resources, study the enemy, train each other, and consciously develop tactics and strategies for a planned fightback. As socialists and feminists, we organize others in a militant struggle for bodily autonomy, reproductive justice, and socialist revolution.