National Day of Action— No War on Iran! 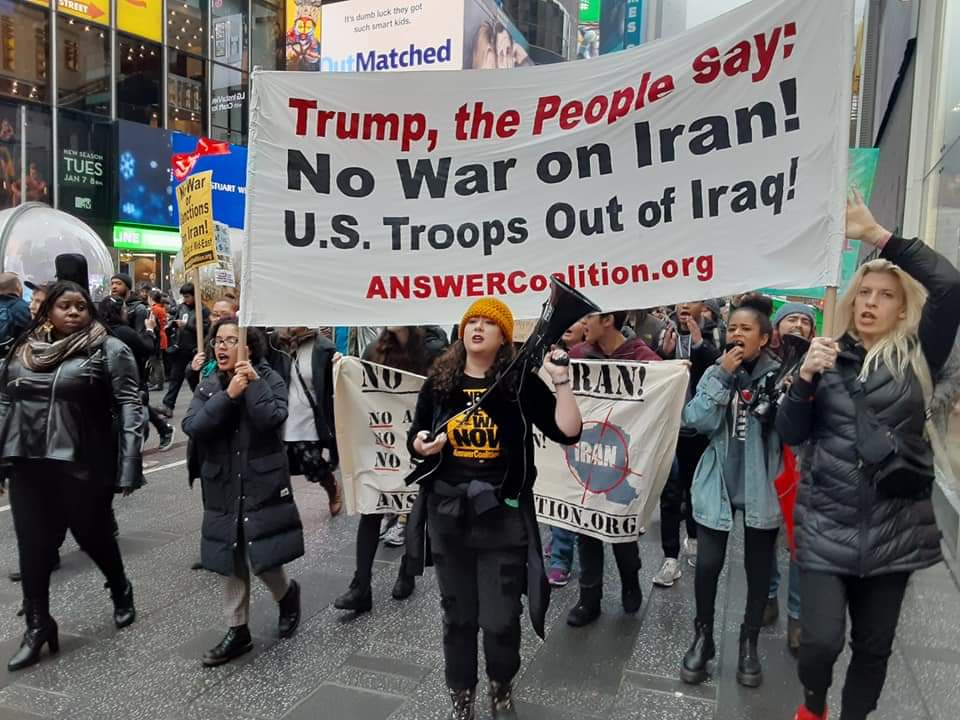 On January 4th, more than 15,000 people hit the streets to demand no war on Iran in demonstrations in over 90 cities across the nation. The mass demonstrations were part of a call for a National Day of Action that was initiated by the Answer Coalition, Codepink, and others in response to the Trump Administration’s declaration of war with the illegal and brazen drone assassination of Iranian General Qasem Soleimani and others at the Baghdad airport.

The calculated assassination of a leading Iranian leader was intended to provoke a new war on Iran.

It is the task of working people of the United States to expose the deception and the push for war before it reaches its catastrophic conclusion. A war on Iran could escalate to global proportions.

War benefits no one. It doesn’t benefit the lives of working people in the United States, nor the working people living in countries under siege by U.S. waged wars. War shapes every aspect of our lives.

Billions— money that could of served the needs of the people—are annually siphoned into the US military budget. Social programs are systematically dismantled to feed the growing drive for war. Just recently, the Trump administration announced cuts to food stamps that will impact hundreds of thousands of people and their families.

The U.S. sanctions on Iran are a form of war. The sanctions have impacted millions of people. Life-saving medicines, cancer treatments, and even hospital equipment in Iran have been affected by the U.S. sanctions.

The recently published Afghanistan papers, a six-part series of internal government documents released by the Washington Post, show how the war machine’s propaganda campaigns promoted lies about the need to support imperial wars in order to “elevate women’s rights”.

War affects women. Fighting against imperialism and war is essential to fighting for women’s liberation. Bombing and restricting basic necessities because of sanctions does nothing for women’s rights and instead pushes back the gains women have fought for.

Fighting for women’s liberation requires putting an end to the military industrial complex and its endless drive for war. The struggle against war is a struggle against the capitalist system itself, a basic feature of imperialism, which oppresses working people to benefit a small class of billionaires. War is a women’s issue. Putting an end to women’s oppression requires the end of imperialist war.

Building an anti-war movement is a day-to-day task that requires the urgency to hit the streets and demand an end to war. The National Day of Action demonstrated the power of working people standing together and organizing to rebuild the anti-war movement in such critical times. It is when working people unite together that the strength of numbers can force the hand of change! On Saturday, Jan. 25 in cities across the world, there will be another set of protests against a renewed push for war on Iran. To learn more about the Global Day of Action or to organize your own, click here for more information.

Oluwatoyin "Toyin" Salau was only 19 years old. To

From the bottom of our hearts, THANK YOU to our co

Breonna Taylor was only 26 when she was murdered i

On May 9th, we celebrate Celia Sanchez’s 100th b

For #TeacherAppreciationWeek, we commemorate Rana

Join @psl_losangeles in a webinar to read and disc