On International Workers’ Day, Breaking the Chains pays tribute to the women workers 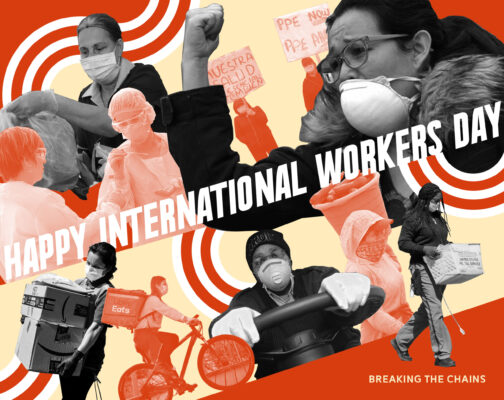 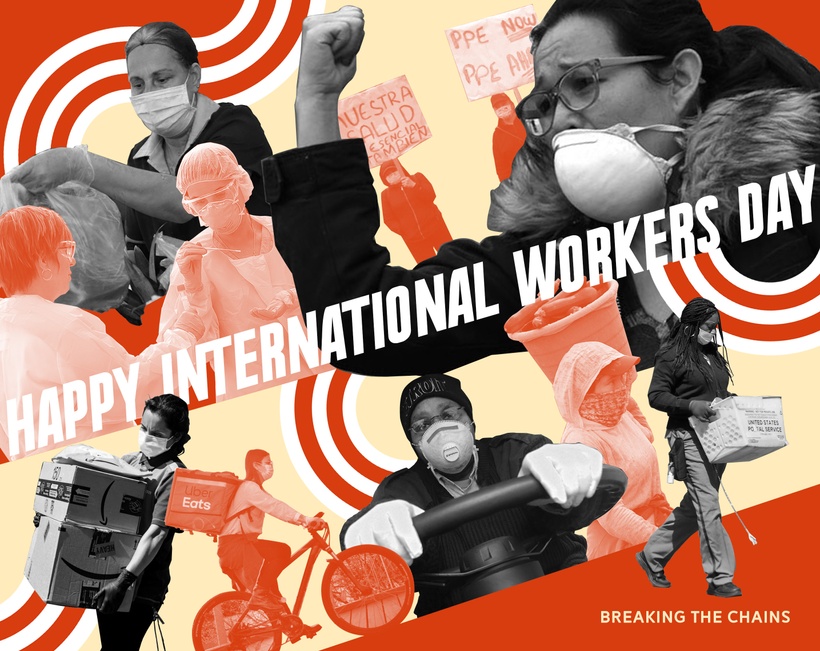 The COVID-19 crisis has introduced a new phrase into public consciousness: essential workers. The danger of infection limits our day-to-day movements. The failure of the government’s response falls heavy on the shoulders of working people. The crisis has created a sharp realization of just what we need to meet our basic human needs, such as food, healthcare, clean and safe shelter, and just who in society helps meet those needs.

The pandemic has revealed the reality of capitalist exploitation. The wealthy billionaires who do no productive work, like Jeff Bezos and the Walton family, are making insane profits. The people who actually keep the country running at this critical moment are the workers, particularly the most oppressed and exploited workers.

Millions of women workers are now counted amongst those deemed essential. According to a New York Times analysis, fifty-two percent of essential jobs under the coronavirus pandemic are filled by women. Women are more likely to work in healthcare. Nearly nine out of 10 nurses and nursing assistants are women. The majority of respiratory therapists, pharmacists, pharmacy aides and technicians are also women. Women make up 46 percent of the workers in medical supply industries, who are no doubt working overtime to produce the gloves, masks and testing swabs necessary to battle the coronavirus.

And it’s not just healthcare. Forty-two percent of Amazon’s workforce and close to 70 percent of laundry and drycleaning workers are women. When we get checked out at the grocery store or stop to pick up fast food, we’re more likely to be served by women.

Women also make up 78 percent of social workers. As tens of millions of workers in the United States file for unemployment, struggle to afford food and rent, hope to avoid infection while living out on the streets, or deal with the mental challenges of social isolation, social workers are there to continue providing critical resources and support.

While many janitorial and cleaning workers have lost their jobs due to the pandemic, some workers, especially undocumented women who work as live-in domestic help or nannies, are forced to work longer hours than ever as they are expected to take on additional duties in a now bustling household. Whether by choice or out of fear of losing their livelihoods, women are on the frontlines of the essential workforce.

Essential during a pandemic, essential before and after

The pandemic may have forced the government to declare millions of women essential workers but the truth is that women take on a great deal of work essential to a functioning society. Seventy-seven percent of teachers and a staggering 94 percent of childcare workers responsible for caring for, socializing, and educating the next generation of workers are women.

Under capitalism, women’s work is undervalued. The same jobs now deemed essential are some of the lowest paid and most exploited. Home health care, for example, is one of the fastest growing job sectors in the U.S. due to an aging population, but the average home health aid worker only makes $25,000 per year. These workers are more likely to be immigrant women and women of color.

Women have also historically shouldered the burden of reproductive labor– the labor necessary to reproduce the working class, whose production the capitalist class exploits for profits. This necessary work includes not just bearing and rearing children, but cooking and preparing meals, cleaning and laundry, elder care, taking care of household finances, and other daily chores. Even with progress in the gender division of labor, reproductive labor continues to fall primarily on women, and even more so during a crisis that closes daycares and schools and leaves children at home.

Emma Tenayuca, a communist organizer and leader of the Texas pecan shellers strike in 1938, spoke these words just a year after the strike. Women are essential hell-raisers for worker rights. We have also always been on the frontlines of the struggle for worker rights. Despite being threatened with losing their job or deportation, to being harassed, beaten, or even killed, women have fought fearlessly to advance the struggle for liberation of the essential class, the working class.

In 1917, a teenage migrant worker, Carmelita Torres initiated what became known as the Bath Riots. When migrant workers crossed the U.S.-Mexico border to work each day, they were forced to undergo a toxic bath of harsh chemicals. One day, Carmelita stepped out and refused to no longer endure the racist, degrading treatment. As she raised her voice, throngs of migrant women joined her, shouting in protest well into the night.

Luisa Moreno, another fearless and quick-witted organizer originally from Guatemala, lived in New York City in the 1930s. She began organizing with co-workers at Zelgreen’s Cafeteria to protest explotiative conditions and sexual harassment on the job. The story goes that Luisa strolled through a police cordon on the picket line outside the restaurant, pretending to be a customer in a fur collar coat. As she made her way through, she whipped around, pulled a picket sign from out under her coat and yelled “Strike!” She was beaten roughly by the police that day, but the incident sparked another 20 years of labor organizing for Luisa.

These powerful stories of women’s working class leadership are only a few historical examples that resonate with us in the movement for women’s liberation today. Throughout the history of the labor struggle, there are countless stories of women stepping up to defend their rights as workers, and the social and political rights of their communities.

Women’s leadership played an important role in the struggles at the root of International Workers’ Day itself. On May 1, 1886, 350,000 workers joined a general strike to fight for the eight-hour work day. Radical socialist organizer Lucy Parsons was among the workers leading the charge, alongside her husband Albert Parsons, who was later wrongfully executed for his alleged role in a bombing known as the Haymarket Affair that took place a few days later. Lucy fought for the release of Albert and the others who were convicted, and continued the struggle for workers rights throughout her life.

In May 1898, lumber company workers in Oshkosh, Wisconsin went on a city-wide strike with demands for union recognition and a pay increase. Women leaders in the town stepped up to forcefully stop scabs from crossing the picket line when the striking workers were unable to do so. At one point during the struggle, the National Guard, armed with guns, was called in to squash the protests. The women helped keep the town united in the struggle even in the face of repression.

Throughout the 1880s and 90s, May 1st was an important day of strikes, demonstrations and worker action to demand the 8-hour day. Many of these struggles, as mentioned above, were led by women workers. By the 1890s, May 1st, primarily under the leadership of the socialist movement, became an international day of workers’ struggle.  After the victory of the socialist revolution in Russia in 1917, May 1st became even more widely celebrated as International Workers’ Day.