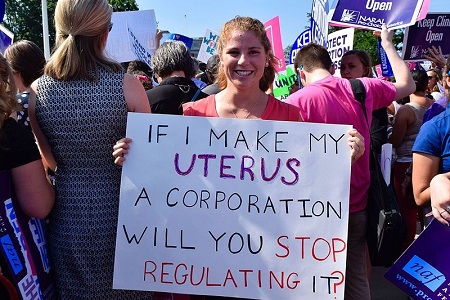 It’s been 46 years since the militant women’s movement won the 1973 Supreme Court Roe v. Wade decision that secured the legal right to abortion. Although the right was won on paper, millions of working-class people continue to face barriers to accessing abortion and other reproductive health services.

Over the last two decades, the rightwing’s strategy has been to erode abortion access by passing restrictive laws state-by-state and even in some cities. Over 1,000 anti-abortion measures were passed at the state level, more than a third of which were enacted in the last eight years. The restrictions vary including prohibiting abortions after a specific point in pregnancy, requiring waiting periods before seeking or obtaining an abortion, counseling as a precondition, funding restrictions, parental consent requirements for minors, or restricting state Medicaid funds. The Hyde Amendment already prohibits the use of federal Medicaid funds for abortion.

https://www.breakingthechainsmag.org/rightwing-sets-their-sights-on-roe-v-wade/(opens in a new tab)

States also passed Targeted Regulation of Abortion Providers (TRAP) laws that set strict, but not medically necessary, guidelines for clinics. When abortion clinics could not meet the nonsensical guidelines dictated by TRAP laws, they closed, leaving thousands of women without access to abortion services. Today, 90 percent of U.S. counties have no abortion providers.

While access to abortions is being targeted across the country, miscarriage is being increasingly criminalized. On Jan. 1, 2020, Georgia’s HB 481 will effectively give a 6-week-old fetus legal personhood status. HB 481 criminalizes any form of pregnancy termination, and could classify miscarriages as second degree murder, resulting in 10 to 30 years of imprisonment. Even if unaware of the pregnancy, a woman’s conduct could be used in a criminal investigation of her miscarriage. Ten to twenty percent of pregnancies end in miscarriage within the first trimester.

The Trump administration kept its campaign promise to restrict abortion access. One of the first actions of the Trump presidency in 2017 was to reinstate a policy denying funds to foreign aid organizations that offer abortion services or provide information about abortions. The administration has also appointed anti-abortion Supreme Court judges Gorsuch and Kavanaugh.

In 2019, five states have passed laws directly challenging Roe v. Wade. The state of Missouri is currently threatening the only abortion clinic left in the entire state — held back at the moment of publication by grassroots organizing. Alabama has passed the most stringent abortion ban, making it a felony for a medical professional to perform an abortion at any stage of a pregnancy, with no exemption in cases of rape or incest. This is the most aggressive attack on Roe v. Wade by trying to make getting an abortion under any circumstance a crime, period. The rightwing will continue to push as far as they can to undermine the right to abortion until they overturn Roe v. Wade entirely.

Multiple state abortion bans, bills and laws invoke the false pretense that a fetal heartbeat is detectable at six weeks. These scientifically inaccurate ‘heartbeat’ bills suggest that at 6 weeks the embryo has a beating heart. In fact, the embryo begins to generate a ‘flutter,’ undetectable by a stethoscope, from a clump of cells that eventually contributes to a cardiovascular system. Calling it a ‘heartbeat bill’ gives credence to the idea that a tiny clump of cells is more important than a living breathing woman who really does have a heartbeat.

Nine states have dormant, pre-Roe abortion laws; anti-abortion laws that were in use prior to 1973 but were never taken off the books. Six states — Arkansas, Kentucky, Louisiana, Mississippi, North Dakota and South Dakota — have adopted post-Roe laws, also called “trigger bans,” that immediately ban abortion in the state should Roe be overturned by the Supreme Court. An additional 28 states have been attempting to pass trigger bans.

Right-wing conservatives, seeing the continuing right-wing shift in the Supreme Court as an opportunity, are pushing for extreme, blatantly illegal abortion bans hoping that one could serve as the basis for overturning Roe v. Wade. The right to abortion is now in danger of being overturned by the clique of unelected judges, vetted and appointed for life by the rich and powerful, who make up the Supreme Court. The central question is how do we defend the right to abortion?

Organizing can stop the anti-abortion campaign

The Democratic Party promotes itself as the champion of women’s rights, but what has been their resistance to these attacks? There is none. The Democratic Party leadership views women’s rights as political bargaining chips. While some verbally advocate for abortion rights, the party stands idle as access to abortion is stripped and federal funds for reproductive healthcare get slashed. They remain silent while Mr. Trump conflates infanticide with abortion late in pregnancy because they fear it will cost them votes if they are “too controversial.” Louisiana’s Democratic Gov. John Bel Edwards, with the support of dozen of Democrats, signed one of the strictest abortion bans into law.

Six presidents — three Democrats and three Republicans — have protected Hyde Amendment restrictions barring the use of federal funds for abortion since 1976. The Hyde Amendment disproportionately affects poor and working-class women who cannot afford to pay for an abortion. In the 2020 race, Biden has now reversed decades of support for the Hyde Amendment in the hopes that he can overcome his sexist, antiwoman reputation. The Democratic Party’s self-serving interest not only endangers millions of women, it undermines the building of a militant fightback movement.

Grassroots organizing, the real challenge to this onslaught, continues to build against the attacks — from trying to get trigger bans off the books to stopping abortion ban legislation before it is passed or goes into effect. In New Mexico, the Party for Socialism and Liberation played a key role in the grassroots organizing for HB 51 which repealed the 1969 pre-Roe law banning abortion, that made providing an abortion a felony. With four Planned Parenthood sites remaining across the state, New Mexico continues to be an abortion friendly state. It serves as a sanctuary state for women from nearby states like Texas and Arizona, where abortion access is virtually non-existent due to the anti-abortion campaigns. Thousands of engagements on the streets with working class people showed mass popular support for repealing the abortion ban. Despite this, the Democratic Party-controlled state Senate voted 26-16 to kill HB 51!

Organizers in many states are preparing to protect and expand reproductive healthcare and abortions rights. There has been a sharp increase in the number of laws and policies adopted at the state level in 2018. Reproductive justice advocacy and grassroots organizing has led to expansions of insurance coverage for birth control and medical facilities providers across various states. These measures are intended to safeguard a woman’s right to chose and provide adequate resources for family planning, including abortion access.

One in four women in the United States have an abortion by age 45. Abortion is a common experience for women, and one that especially impacts poor women and women of color for whom abortion rates are the highest as a result of social and economic exploitation under capitalism. Restrictions and bans will not make abortion go away. They will only make it more dangerous.

If Roe v. Wade is overturned it will have a devastating impact for millions of women. Women’s rights should not be at the mercy of politicians who represent the interests of the rich. Politicians who claim to be pro-life still prefer to spend trillions of our tax dollars on wars and developer tax breaks to displace our communities, rather than making sure every person has access to health care, housing and a job. Under the current capitalist system, women’s rights are bargaining chips for politicians, therefore our most basic rights are repeatedly under threat.

We cannot rely on the Democrats to be our champions nor allow them to co opt or sell out our movement. We need to build an independent, militant movement in the streets that can challenge the current campaign and fight for our rights. Roe v. Wade was won by a militant women’s movement in the streets, and that is precisely what it will take to protect it from those who have no respect for women’s rights.