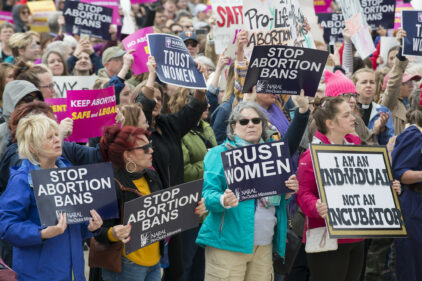 On Dec. 9, the Supreme Court declined to hear a challenge to an extreme Kentucky law  requiring doctors to show and describe fetal ultrasound images to women seeking abortions. The court’s action means that the law will go into effect.

The challenge to the anti-abortion law was brought by the sole licensed abortion clinic in the state and three doctors who work there. They argued that the law violates physicians’ First Amendment rights, forcing them to participate in state-mandated speech against the wishes and well-being of their patients.

The petition they submitted to the court gives a harrowing description of the 2017 law they hoped to overturn: “under the Act, the physician must display and provide a graphic description of the ultrasound image (including, e.g., identifying all visible internal organs) during the ultrasound procedure. The physician must convey these specific words, images and sounds to the patient even if she does not want to see or hear them and even if she tries to physically resist them. As a result of this law, while the patient is half-naked on the exam table with her feet in stirrups, usually with an ultrasound probe inside her vagina, the physician has to keep talking to her, showing her images and describing them, even as she tries to close her eyes and cover her ears to avoid the speech.”

The right-wing proponents of this law pretend that these intrusive mandates are about what they call informed consent. The challenge to Kentucky’s HB 2 was brought to the Supreme Court after the 6th Circuit Court of Appeals decided to let the Kentucky law stand. Judge Joh Bush authored the 6th circuit decision. He is a Trump appointee who has compared abortion to slavery and publically disparaged gay rights. In the decision, he wrote, “This also inherently provides the patient with more knowledge about the effect of an abortion procedure: it shows her what, or whom, she is consenting to terminate.”

The condescending, patronizing language assumes that women are so incompetent that they can’t make decisions for themselves about their own bodies. The faulty patriarchal argument is itself contradicted by the law’s explicit mandate that doctors must keep talking to a patient, showing her images and describing them, even as she closes her eyes and covers her ears to avoid the speech. The right-wing is saying that forcing them, against their will, to listen to and view an ultrasound means they are NOW informed enough to give consent.

The real intention of the law is to limit access to abortion by making the process as difficult and violating for patients as possible. The law also requires the ultrasound occur 24 hours prior to an abortion, requiring that anyone seeking an abortion must take off additional time from work and make additional arrangments as well as experience the forced ultrasound. According to the Guttmacher Institute, 59 percent of women seeking abortions already have children. These laws are truly just trying to make the process as burdensome as possible.

It’s part of a larger campaign to do the same across the country and ultimately to overturn Roe v Wade. Three other states also have similarly invasive and prohibitory laws: Louisiana, Texas and Wisconsin.

The upholding of this Kentucky law is a victory for the right-wing anti-abortion forces working to roll back reproductive rights across the country. This dangerous, anti-woman movement has been gaining momentum since Trump’s election in 2016, backing increasingly aggressive abortion restrictions with the ultimate goal of overturning Roe v. Wade.

The Kentucky law was among a set of anti-abortion laws that have reached the Supreme Court this term. In March of 2020, the Supreme Court is set to hear arguments concerning a Louisiana law that requires abortion providers to have admitting privileges at a nearby hospital. The regulation, if approved, would lead to two of the state’s three clinics closing down, and broaden states’ ability to restrict access to abortion.

The question of women’s access to abortion services is not a moral issue. These legislative assaults are a threat to women’s fundamental rights and safety. At the same time, these same reactionary forces are also coming after LGBTQ people, immigrants, people of color, and workers. It is urgently necessary to mobilize the broadest coalition of forces to fight back against this reactionary offensive. History has shown that through struggle we can fight back and win–the militant mass women’s movement of the 1960s won the victory of Roe v. Wade in 1973 despite an all conservative majority Supreme Court. We must revive this militancy and organization if we are to triumph in our struggles today.