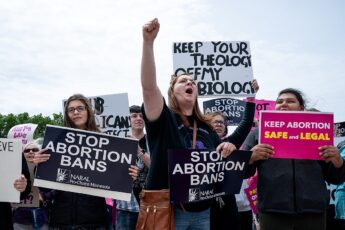 On March 4, the Supreme Court heard oral arguments concerning a Louisiana law requiring abortion providers to have admitting privileges at a nearby hospital. If upheld, the law could make Louisiana the first state without legal abortion access since abortion’s legalization in 1973.

Louisiana’s “Unsafe Abortion Protection Act,” blocked since just after its passage in 2014, was ostensibly enacted to “improve abortion safety by means of doctor credentialing.” The law would require any abortion provider to secure admitting privileges at a hospital no more than 30 miles from the clinic where the procedure is administered. This means the doctor must be a member of the hospital’s staff and they must have permission to admit and diagnose patients. Only one abortion provider in the state currently qualifies and he testified that he would retire because of the harassment he has suffered and his fear for his safety.

The Supreme Court overturned a virtually identical law from Texas in 2016, finding that requiring doctors to have hospital admitting privileges serves no medical benefit to women, and in fact imposes substantial burdens on women. Because the burdens exceeded the benefits, the court found the law unconstitutional.

Now the Supreme Court is considering whether the Texas precedent applies nationwide, or whether it should be determined on a state-by-state basis, overturning the Texas precedent. This case, called June Medical Services v. Russo, is the first major abortion case to come before the Supreme Court since Trump’s nomination of reactionary Justices Neil Gorsuch and Brett Kavanaugh, which shifted the court to a 5-4 conservative majority.

The court appeared predictably divided during arguments. Conservative Justice Samuel Alito, a longtime opponent of abortion rights, came out with the most vocal support for the law. He questioned how hard Louisiana doctors had actually tried to secure admitting privileges and whether there was a conflict of interest for doctors to file this suit. This question—whether doctors or clinics can sue on behalf of their patients—carries high stakes both for abortion rights and potentially in other matters. The state’s lawyer argued that the interests of a business that exchanges medical services for a fee may be at odds with their patients. If this position is accepted, it would put the burden of challenging anti-abortion laws on women who themselves are denied abortion access by a law.

The four liberal justices, led by Justice Ruth Bader Ginsburg, pushed back on the state’s case, highlighting the precedent already set by the Supreme Court on the issue. They also pressed the state’s lawyer about whether the Louisiana law was truly passed to make women safer, or if it was actually intended to limit abortion access.They pointed out that hospital admitting priveleges are prohibitively difficult to attain for many abortion providers, in large part because abortion is such a low-risk medical procedure. Ginsburg asked the state’s lawyer, “Is it not the fact that … in Louisiana in order to get admitting privileges you have to admit a certain number of patients?” And because of how safe abortion is, many clinics “will never qualify because their patients don’t go to the hospital.” She rightly pointed out that a first trimester abortion is in fact “far safer than childbirth.”

Justice Elena Kagan noted that there are many reasons a doctor may be denied admitting privileges that have nothing to do with their medical expertise. The decision “could rest on the number of patients a doctor has … on whether a particular hospital needs more providers” and it can even “rest on a general view that they don’t want abortion providers in that hospital.”

Indeed, despite repeated attempts by abortion providers, only two doctors in Louisiana have been successful in attaining the designated hospital admitting priveleges. CBS News has recently discovered that one of the two doctors, called Dr. John Doe 5 in court documents, stopped providing abortions about a year ago. The last remaining doctor, “John Doe 3,” said he would retire if the Supreme Court upholds the law, out of fear of attacks by anti-abortion extremists. His fear is warranted—since the legalization of abortion in 1973 the anti-abortion movement has led an organized campaign of escalating violence against abortion providers. Since 1993, there have been at least 11 murders and 26 attempted murders by anti-abortion terrorists. Several doctors have been attacked in their own homes.

The retirement of John Doe 3, the last man standing, would effectively end legal abortion in Louisiana. Abortion providers and advocates have long feared this possibility—that even without overturning Roe v Wade, the right-wing could regulate abortion out of existence.

The anti-abortion movement has been pursuing this legal strategy for decades. Since the legalization of abortion in 1973, the right-wing has sought to destroy abortion access, first by passing the Hyde Amendment. The 1976 Hyde Amendment denied the use of federal Medicaid funds for abortion. More recently, the right has attacked access to this medical procedure by passing “targeted restrictions on abortion providers”, or TRAP laws. These laws impose medically unnecessary requirements on outpatient abortion clinics, intentionally driving many out of business. Typically these laws apply state standards for ambulatory surgical centers to abortion clinics, even though surgical centers provide more invasive and higher risk procedures involving higher levels of sedation. As TRAP laws have bombarded clinics, Catholic Church affiliated chains have been buying up secular private hospitals, making it harder and harder for women to have abortions in hospitals. These conditions have created a de-facto ban on abortion in some states by making it very hard for women to actually access what should be simply a legal medical procedure. Today some 38 percent of reproductive-age women live in counties with no abortion providers at all and would have to travel to access the procedure. For poor women and women in the most isolated areas, this may mean obtaining an abortion procedure is virtually impossible.

With Trump in the White House, the offensive against reproductive rights has escalated. Trump’s appointment of conservatives Gorsuch and Kavanaugh to the Supreme Court has tipped the court’s composition decisively to the right. Now the emboldened anti-abortion movement is deliberately passing laws that will provoke a legal challenge, with the goal of bringing the cases before the Supreme Court and opening up the possibility of overturning Roe v. Wade.

This helps explain why this Louisiana law–so similar to the 2016nTexas case–has been brought before the Supreme Court just four years later. The 2016 decision, made by a 5-3 liberal majority court (following Justice Antonin Scalia’s death), reaffirmed the longstanding principle that it is unconstitutional to place an “undue burden” on abortion access. This has been the standard used by the Supreme Court in every case involving abortion regulations since it was established in the landmark 1992 case Planned Parenthood v. Casey. Now that there is a 5-4 conservative majority, there is a distinct chance that the court will break with this precedent and open up the potential for similar legislation in other states.

Earlier this year, more than 200 members of Congress filed a brief urging the Supreme Court to uphold the Louisiana law and, further, to consider overturning Roe v. Wade. The 39 senators and 168 House members, all but two of whom are Republicans and 97 percenet of whom are men, signed onto the brief which stated, “Roe did not actually hold that abortion was a ‘fundamental’ constitutional right, but only implied it. Casey clearly did not settle the abortion issue, and it is time for the Court to take it up again.” The brief argues, “Roe’s assumptions have changed considerably since 1973. Biological and technological developments, including the development of in vitro fertilization since the 1970s, have reinforced the medical conclusion of the 19th century that the life of the individual human being begins at conception.”

That in 2020, more than 50 years after Roe, abortion rights are still in question reveals the precarity of women’s rights under this patriarchal system. In the United States, women’s bodily autonomy is not affirmed unequivocally by the law, but is instead in the hands of an unelected high court, which can be populated by right-wing misogynists and even accused rapists at the whim of a president.

The Supreme Court will decide on the Louisiana case by July of this year. If the Louisiana law stands, abortion rights will effectively be eliminated for the at least 2.27 million people in the stte of Louisiana who can become pregnant. The precedent would likely trigger other states to adopt similar legislation. For those who stand for all people to have bodily autonomy and for women to occupy an equal place in society, the time is now to organize the fight back against this rightward trend. The mass women’s movement won Roe v. Wade in 1973. The right wing can surely be defeated again if a mass and militant movement rises to stop it.