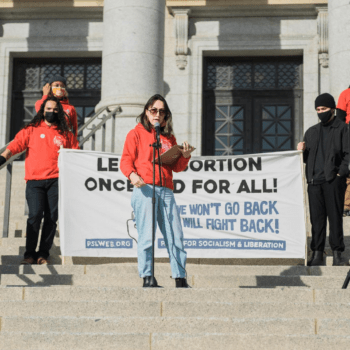 Utah is one of 21 states that have “trigger laws” ready to automatically ban all abortions if Roe v. Wade is overturned by the Supreme Court. Utah’s trigger law, SB 174, was signed into law two years ago following an onslaught of right-wing, legislative attacks on abortion rights.

Activists in Utah aren’t just waiting to see how the Supreme Court will rule in June. In January, at the beginning of Utah’s 2022 legislative session the Salt Lake City branch of the Party for Socialism and Liberation launched a campaign to fight back.

The PSL is engaged in building a coalition of working and oppressed people, women of color and queer activists to oppose the attacks on bodily autonomy and to keep abortion legal in Utah. With a strong, militant movement, they planned a powerful campaign to pressure lawmakers to kill this oppressive and anti-women law before the Supreme Court issues its ruling on Mississippi’s Dobbs v. Jackson Women’s Health Organization in June. From the people on the street, to the Utah Medical Association, an overwhelming majority of Utahns support abortion protections granted under Roe v. Wade and don’t want SB 174 enacted.

SB 174 – A brutal attack on the working, poor, and oppressed

Currently, abortion remains legal in Utah up to viability, but that has not stopped the state legislature from passing several restrictive abortions laws. In 2019, the Utah Legislature passed an 18-week ban.  Planned Parenthood and the American Civil Liberties Union then filed a lawsuit to stop the ban’s implementation. The judge for this case issued an injunction, so the bill never went into effect. If the Supreme Court allows Mississippi’s 15-week ban to stand, then the judge could allow Utah’s 18-week ban.

If the Supreme Court overturns Roe v. Wade altogether then SB 174, Utah’s trigger law, could go into effect banning nearly all abortions except in the case of rape, incest, or if the pregnancy is life threatening.

Even though abortion is  legal in Utah, several other restrictive abortion laws are in place.. In order to get an abortion an individual is required to participate in state-directed, biased counseling. Then one must  wait 72 hours and watch a state-mandated online “information module” designed to stigmatize abortion and encourage the continuation of the pregnancy, and obtain a certificate of completion showing one watched the module This effectively shames and further traumatizes a person seeking abortion for three days,  delaying essential medical care.

The law also aims to prosecute women if they move forward with a self-induced abortion. Terminating a pregnancy “illicitly,” according to the bill, would be a second-degree felony, punishable by up to 15 years in prison and a $10,000 fine.

In July 2021, Utah Senator Mike Lee joined two Republican colleagues, Ted Cruz in Texas and Josh Hawley in Mississippi, stating that his preferred outcome to the Dobbs v. Jackson Women’s Health Organization case would be no federal protection for abotion rights, leaving abortion access up to individual states. Lee stated that “the issue is whether people, through their elected representatives, should be able to decide how to protect human life.”

However, a recent poll conducted by the Planned Parenthood Association of Utah, Alliance for a Better Utah, and the ACLU of Utah revealed that “80 percent of Utahns believe the state does not need new restrictions on abortions.” The same poll found that 52 percent of Utahns would vote to uphold Roe v. Wade if they had the opportunity.

In response to concerns of adequate access to abortion in Utah, lawmaker Cheryl Jordan replied callously that people seeking an abortion could simply travel hundreds of miles: “….There will always probably be states that have abortion, like Nevada.”

For abortion providers and advocates like Karrie Galloway, President and CEO of Planned Parenthood Association of Utah, requiring women to leave the state for an abortion is indefensible, “Women of means will always have a way to access health care… but let’s talk about the women who hardly have disposable money to feed their families.” This is a reality for working women, especially women of color, in Utah and the pandemic has only exacerbated these circumstances.

The last two years of the COVID-19 pandemic have burdened working women in all areas of life. A high rate of working women in retail, food services and other hospitality industries have been laid off or furloughed. Women in the sectors of healthcare and education experienced increased workloads while also absorbing a greater responsibility of unpaid caregiving as children attended school online. Poor and working class women are experiencing the brunt of these hardships.

In response to these difficulties, Utah lawmakers did worse than nothing — they voted to end the COVID-19 stimulus, an additional $300 on top of unemployment, earlier than the federally mandated end date. They also voted to end the nationwide eviction moratoriums, which resulted in evictions across the state.

The minimum wage in Utah is still at the federally mandated minimum of $7.25/hour. The cost for rent in Utah is skyrocketing and pushing out low-income families.

Utah lawmakers forced “essential workers” back into the pandemic with no implementation of a public safety net during a spike in COVID-19 infections. Just recently, Utah reported a total of nearly 22,000 cases of COVID in just one day.

Utah state officials feign care for families but it is clear that these lawmakers do not care for the well-being of children. Instead, they work hardest to punish and control the bodies of women.

Abortion rights are irrevocably connected to the fight for all basic necessities that the captialist system constantly tries to cut back. Demanding that abortion remain legal is about putting power and control back in the hands of women, trans, and non-binary people.

Utahns unite in a campaign against the “trigger law”

On September 11, 2021, the Utah Medical Association (UMA) passed a resolution in opposition to SB 174. This is the first time the group has taken a public stance on abortion. Dr. Lori Gawron, a UMA 2021 delegate stated, “I do think medical societies across all states have a really important role… [our position] shows that doctors are not approving of whatever language or bill that interferes with the health of our patients.”

The public data and vocal opposition from doctors to this trigger law shows that the fight for abortion rights will not stop. Activists in the PSL are targeting the 2022 Utah legislative session as the current arena for this fight. The session is set to be conducted from January 18 to March 4.

The PSL has started petitioning against the bill, organizing an educational forum and two demonstrations: one on Utah’s Capitol Hill and another on International Women’s Day. If you are in the Salt Lake area and want to join the struggle to stop SB 174, sign up to get involved today. Roe v. Wade was won through organizing and pursuing an intense struggle in the streets. These accomplishments are at a constant threat of being overturned. Lawmakers will continue to attack reproductive rights, while withholding aid for adequate access to healthcare, childcare, or other forms of social services that would directly benefit working class women. As with any progressive gains won by the people, we must organize and fightback to protect our reproductive rights!