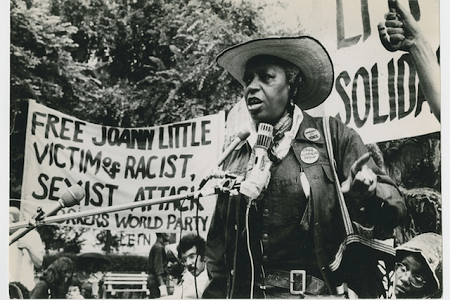 Florynce “Flo” Kennedy was known for her flamboyant style, often wearing a cowboy hat, and for being “the biggest, loudest and indisputably, the rudest mouth on the battleground where feminist activists and radical politics join in mostly common cause” (People Magazine, 1974). She used her lively attire and outrageous comments to draw attention to the injustices women encountered until her death in 2000. Kennedy consistently defied norms, so much so that she organized a “pee-in” in Harvard Yard in 1973 to protest the lack of women’s bathrooms in university buildings.

Florynce Kennedy was a Black feminist lawyer and activist who drew connections between the women’s movement and the Black liberation struggle. Kennedy demonstrated that systems of oppression are connected, and she invited members of various movements to join together.

Kennedy knew that the path to liberation was to join forces and build a mass movement. During the 1970s, she was the women’s movement’s most well-known Black feminist, yet Kennedy has been almost completely erased from this age of radical politics and activism.

Kennedy was born in Kansas City, Missouri, on Feb. 11, 1916, to working-class parents, the second of five kids. Her family experienced racism in their predominantly white neighborhood, including the Ku Klux Klan trying to drive the family away.

Kennedy would later say: “My parents gave us a fantastic sense of security and worth. By the time the bigots got around to telling us that we were nobody, we already knew we were somebody.”

After the death of her mother, she moved to New York City with her sister. She worked various part-time jobs while attending Columbia University, majoring in pre-law. Kennedy was one of the first Black women to graduate from Columbia Law School after fighting to be able to attend. She had threatened the school with a discrimination lawsuit.

Kennedy opened her own law office. Business was not always good, and she had to take on a job at a department store. Kennedy represented women who were victims of domestic violence. She also defended the estates of Charlie Parker and Billie Holiday against record companies to receive royalties owed to them.

These cases left her feeling disillusioned despite winning them. “I realized that the law was not set up for justice for anybody that I cared about — it may be justice for the landlords and the banks and the television networks and the telephone companies to get multi-million dollar raises, but when it came to the people I cared about, justice was nonexistent.”

Kennedy made a turn toward activism after becoming discouraged by the legal system. As an attorney, Kennedy spent her time representing political activists, such as Black Panther Party members and Assata Shakur, and filing anti-discrimination complaints. She filed a lawsuit against the Catholic Church in 1968 on the grounds that the church violated its tax-exempt status by breaking the separation of church and state with its interference against abortion rights.

She was an original member of the National Organization for Women, though she left in 1970 feeling frustrated with the leadership ignoring statements made by Black women in the organization. NOW’s lack of radical politics and their reluctance to unite the feminist and Black Power movements alienated Kennedy. She would say she was not the type to fight for control of an organization, thinking “I can’t waste my time on this bull[shit].”

In 1969, Kennedy played a major role as one of the lawyers in the Abramowicz v. Lefkowitz case, a class-action lawsuit that was the first constitutional challenge to repeal New York State’s restrictive abortion laws. The case was a first of its kind in that it raised the issue of a woman’s right to abortion rather than a doctor’s right to practice medicine. It was also the first time the plaintiffs were the women who had illegal abortions or had been forced to remain pregnant and give birth. Kennedy developed tactics that were used sometime later during Roe v. Wade, including using activist language in court.

There were demonstrations during the case, some of which Kennedy helped organize, that led to the legalization of abortion at 24 weeks’ pregnancy. She spoke at one rally saying, “There is no need for any legislation on abortion just as there is no need for legislation on an appendectomy.” Kennedy was convinced that the law could push forward social progress only if used along with political activism, and the result of this case strengthened her belief.

Today, right-wing attacks on women and reproductive rights continues. We need to be on the offensive to defend Roe, but also to demand that abortion, birth control, and other reproductive health services be safe, accessible and free for all. Women like Flo Kennedy were the builders of this type of feminist movement in the 1960s and 1970s. We can learn from them in so many ways. As Flo Kennedy would say: “Don’t agonize, organize.”