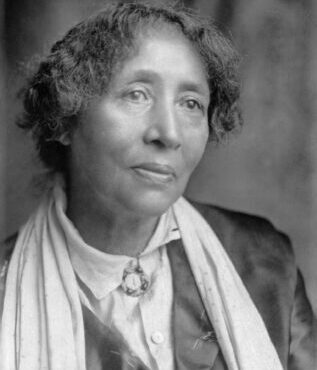 However, the ruling class then constructs a narrative of people’s movements that is a gnarled distortion of reality. After a movement gains concessions from the ruling class through reforms, those in power sometimes claim the heroes and the gains of the movement as their own. After the capitalist tide has washed over the masses, eroding their jagged edges, the watered down ghost of a revolutionary is served to us in a tall glass to wash down a bitter “history” from the perspective of the oppressor. This is the case with the legacy of Lucy Parsons.

Lucy was born in 1853 in Texas. Little is known about her early life but it is likely that she was born to slaves. Her Native, Mexican and African heritage made her ethnicity a bit ambiguous. Lucy used several surnames throughout her early life and sometimes went by Lucy Gonzalez.

In 1870 Lucy met and later married Albert Parsons, a white writer and fellow radical. Their interracial marriage would not have been considered legal at the time. After Albert was shot in the leg while organizing to register Black voters, they were forced North in 1873 under the threat of lynching.

The Parsons moved to Chicago and continued their fight against injustice. Working with the Social Democratic Party and the Workingmen’s Party of the United States, Lucy wrote for the latter’s paper and became a lecturer and activist.

Lucy and her husband supported and organized with the railway workers during the massive 1877 strike. Albert Parsons was fired from his job as a writer with the Chicago Times and was blacklisted for his political work. Lucy became the primary financial provider for the family by opening a dress shop and began organizing members of the International Ladies’ Garment Workers Union. She wrote for many publications including The Socialist and in 1883 was one of the founders of The Alarm, a weekly anarchist publication.

In the aftermath of the Civil War and in the face of industrialization, U.S. workers labored an average of 60 hours per six-day work week. All over the country, and with each passing day, the workers’ unrest with their poor working conditions and low wages grew. On Saturday, May 1, 1886, thousands of workers struck demanding an eight-hour workday. Rallies were held throughout the United States. In Chicago, the epicenter of this movement, where some 30,000 – 40,000 workers had gone on strike, Lucy was among the leaders. On May 4, the day after police killed two striking workers, a bomb exploded as police violently dispersed a rally in Chicago’s Haymarket Square. Seven cops and at least six workers were killed in the subsequent chaos. Eight anarchist activists were blamed for the bombing, including Albert Parsons.

Lucy gained notoriety in the labor movement for her defense of the eight men. Albert and four other activists were executed in 1887 on charges that they had conspired in the notorious 1886 Haymarket Riot, which ultimately led to the international celebration of May Day in subsequent years.

Widowed with two children, Lucy continued to advocate, write and organize against the oppression of working people. In 1892, she founded the paper Freedom: A Revolutionary Anarchist-Communist Monthly. She was a founding member of the Chicago chapter of the Industrial Workers of the World and wrote for the organization’s paper.

In 1915, Lucy organized the Chicago Hunger Demonstrations. She worked with the National Committee of the International Labor Defense which provided defense for a wide range of people unjustly accused of crimes.

When Lucy Parsons addressed her comrades as a speaker at the IWW founding convention, she outlined her vision of true equality and justice:

“Now, what do we mean when we say revolutionary socialist? We mean that the land shall belong to the landless, the tools to the toiler, and the products to the producers. . . . I believe that if every man and every woman who works, or who toils in the mines, mills, the workshops, the fields, the factories and the farms of our broad America should decide in their minds that they shall have that which of right belongs to them, and that no idler shall live upon their toil . . . then there is no army that is large enough to overcome you, for you yourselves constitute the army. . . .”

Parsons, who never stopped fighting for the working class and oppressed, died in 1942. As the torrent of capitalist “history” attempted to whisk away her ghost, they did not stop to consider — and they never do — that the desire for truth and justice, based on the lived oppression of the masses under this system, cannot be drowned and disappeared. The revolutionary women they have attempted to wash away have become the bedrock for the revolutionary women who stand here now.