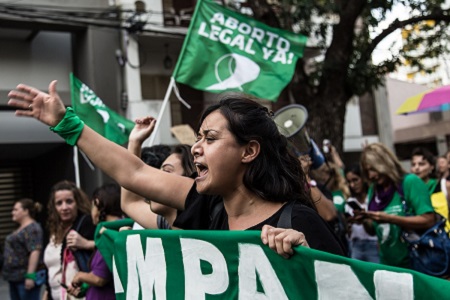 In December 2020, a 12-year-old girl who had been sexually assaulted gave birth to twins after being denied the right to an abortion in Argentina. Even though federal law granted exceptions in the case of rape, authorities were accused of deliberately delaying action on the child’s pregnancy until she was too far along for the procedure to be admistered.

Tragically, this is the reality when abortion is not legal. Each year, in Argentina, approximately 38,000 women are hospitalized because of dangerous, clandestine terminations. More than 3,000 women have died as a result since 1983. These inhumane circumstances led to mass movements for reproductive rights and the eventual legalization of abortion.

Just weeks after the twins’ birth, Argentina’s Safe Abortion law passed in the Senate with 38 votes in favor and 29 against, with one abstention. The bill permits free and safe abortions up to 14 weeks of pregnancy, an enormous gain for a population that previously subjected to criminal charges. While there had been exceptions in the case of rape and the endangerment of the mother’s life, implementation of the exception had been dangerously inefficient.

The bill also calls for a “thousand days of responsibility,” during which the government is responsible for providing support to poor women who decide to carry a pregnancy to full term but do not have enough money to support the child.

This progressive legislation makes Argentina the largest country to legalize abortion in Latin America, sending ripples throughout the continent. Movements in Colombia, Chile, and Mexico are expected to see growing movements for access to abortions historically demonstrated by Argentina’s influence across the continent. Argentina has been a leader in the adoption of feminist reforms.

In 1991, Argentina was the first in the region to pass a law to have women in parliament, guaranteeing that women would fill at least one-third of the positions in congress. Soon after, the surrounding countries implemented similar initiatives. In 2010, Argentina was the first to approve same-sex marriage, followed by Brazil, Colombia, Ecuador, and Uruguay. In 2012, they became the first to approve a law that allowed people to change their official gender identity without medical intervention. It is hoped that the legalization of abortion will provide inspiration and energy to their neighbors to organize successful campaigns in their own countries.

This victory comes from grassroots organizers’ political power, largely working-class women and people who have dedicated the last few years of their life to marches, campaigns, online agitation and mass discussions surrounding the pro-choice movement. Thousands of people gathered the night of the decision in a green wave that came to represent the reproductive justice movement. There were tears of joy by activists who watched as their work came to fruition and tears of sadness for all those who suffered and lost their lives in the decades prior.

Though the bill was vehemently opposed by the Catholic Church, Evangelical churches, and the Pope, working-class Argentinian women’s efforts outweighed those of powerful religious institutions. While a legalization bill failed in 2018, the mobilization of women since then has influenced the president and the state to implement this reform. The Ni Una Menos (Not One Woman Fewer) movement, which originated in 2015 to protest violence against women, made abortion rights one of its primary goals. This widely popular movement helped to sway public opinion not only about abortion but gave much-needed visibility to the many horrific manifestations of misogyny present in Argentina. Its feminist message eventually spread across the region, a testament to the power of marginalized people speaking out and organizing amongst each other.

Access to abortion is not a struggle over ethics, morality or religion. It is a struggle for public health. Without access to this medical procedure, women will continue to either die from the performance of unsafe abortions or experience the physical and emotional trauma of a birth that they were forced to have. The ability to terminate an unwanted pregnancy is a vital component for the liberation of women and strides to make abortion free and readily available everywhere is a necessity. Any reactionary legislation that attempts to determine the conditions under which we give birth and raise children is designed to strip us of our ability to make decisions about the most intimate parts of our lives and should be fought against as part of a larger struggle against the oppression of the working class. Through this struggle, Argentinian women have paved the way for a safer future for all.