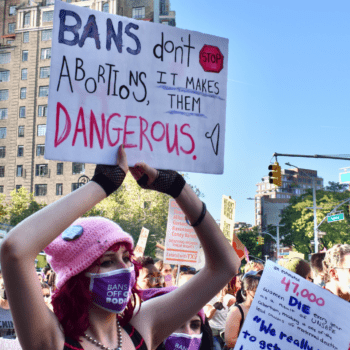 The right to abortion is currently under the most intense, unprecedented attack that the United States has seen in decades.

Though attempts by the right wing to criminalize abortion are nothing new, the recent passage of Texas SB 8 has accelerated the possibility of women’s rights being stripped away nationwide. The bill, which passed in September 2021, banned nearly all abortions in the state — and the Democratic party’s failure to rigorously defend abortion rights on the national level has encouraged many states to follow Texas’s lead.

Texas SB 8 outlaws all abortions in the state after just six weeks of pregnancy. At six weeks, most women are usually still unaware of their pregnancy, leaving them little to no time to deliberate or seek abortion. Since the implementation of SB 8, an average of 1,400 women have traveled outside of Texas each month to seek an abortion in a neighboring state after six weeks of pregnancy. This is a significant increase compared to 235 women who traveled outside of Texas to access abortion care in August 2021. Overwhelming evidence suggests that the need for abortion has not declined; women are simply getting abortions elsewhere.

This policy harms poor and working-class women the most; they are the least likely to be able to take off work in time for the procedure, and they are the hardest-hit financially when forced to carry a pregnancy to term. The new necessity of out-of-state travel adds yet another hurdle. Communities of color are the most severely impacted, with over 69 percent of surveyed Texas women seeking abortion in another state being Black or Latina. While access to the abortion pill by mail has increased and offers a safe way to terminate a pregnancy, Texas SB 4 limits the abortion pill’s accessibility by criminalizing abortion-inducing drugs after seven weeks of pregnancy. Those who cannot afford the trip or lack access to the abortion pill may even attempt dangerous at-home procedures in the absence of medical care.

People across the country have been protesting this draconian law for months only for the Democratic Party — a self-proclaimed champion of women’s rights — to respond with a deafening silence. All challenges to SB 8 have unsurprisingly been shot down by the Texas Supreme Court; the U.S. Supreme Court has allowed the law to stand. Since 1973, a sweeping pro-abortion law could have been passed by the Democrats. But now, in response to the latest crisis, the Democrats have failed to pass the Women’s Health Protection Act in the Senate. Days later, President Biden neglected to even mention the word “abortion” once in his State of the Union address.

The lack of government resistance to the attacks on abortion has opened the door for many states to mold SB 8 into their own extreme laws. The right wing has taken to the offense in states such as Kentucky, Florida, Missouri and South Carolina to push SB 8 even further. Some examples include:

-Florida: Legislators voted to ban all abortions after 15 weeks with no exceptions for cases of rape or incest. The state just passed two bills that criminalize discussion of gender, sexual orientation and race in schools.

-South Carolina: State legislators are now on the verge of passing three extreme new bills. SB 1127 would completely ban abortion and criminalize pregnancy outcomes like miscarriage. Companion bills SB 907 and HB 4568 would require healthcare providers to “inform” abortion patients with disputed information about the ability to reverse the process when using an abortion pill.

-Missouri: A bill has just been introduced that would ban abortions during cases of life-threatening, nonviable ectopic pregnancies. Any act relating to inducing or performing an abortion would become a Class A felony punishable by up to 30 years in prison.  It would also become illegal to manufacture, transport, possess or distribute abortion pills in Missouri. The state is also deliberating over a bill that would allow any private citizen to report and sue another citizen who travels out of state seeking an abortion.

-Idaho: Most recently on March 14, the Idaho House passed SB 1309, making it the  first state to adopt a copycat of the Texas law that relies on ordinary citizens to enforce a ban on abortions after six weeks of pregnancy as a way of getting around court challenges. The Idaho bill, similarly titled a “heartbeat bill,” allows family members of what the legislation calls “a preborn child” (including those of a rapist) to sue the abortion provider and establishes a reward of at least $20,000, plus legal fees. It allows lawsuits against providers for up to four years after an abortion.

These disturbing policies all signify a larger pursuit to overturn the landmark 1973 abortion case Roe v. Wade. This wave of legal attacks is occurring at a completely unprecedented rate, laying the groundwork to completely restrict abortion in half of U.S. states. According to research by the Guttmacher Institute, 26 states are “certain or likely” to put a total ban on abortion if Roe is overturned. Some progressives also worry that the legal use of “personhood language” in bills like SB 1127 intends to confer full legal personhood to fetuses at the moment of conception, which could open the door for even more restrictions on the rights of pregnant women.

In the event that Roe is overturned, experts worry that millions of women will be left in a dire position. As a result of the Texas ban, abortion clinics in nearby states like Oklahoma and New Mexico have already been overrun.

Residents of “legal” states have been turned away in some cases due to the massive demand at their own clinics. A clinic by Trust Women in Oklahoma has reported treating 10 times as many patients from Texas, forcing Oklahoman women to then travel out of state for abortion services as well. As legal methods and facilities shrink, the queue for abortion services also means that women are receiving them later in their pregnancies than intended, which poses further health risks.

Unfortunately, women and abortion providers in Texas have been left completely defenseless against the law after the Supreme Court refused to stop the implementation of SB 8 while opponents pursue further legal action in lower courts. The Democratic party has thrown its hands in the air–with President Biden refusing to even mention the crisis, much less defend against it.

But the fight is not over. Another hearing over Mississippi’s 15-week ban is scheduled for late spring, in which the Supreme Court will take another step to decide the fate of Roe v. Wade. While its track record does not look promising, the Supreme Court may very well end up preserving the ruling if it experiences enough pressure to do so.

Activists and advocates for abortion rights have been able to push forward legal wins. In anticipation of Roe being overturned, 15 states and the District of Columbia have passed legislation to preserve abortion rights. However, this patchwork state-by-state approach to protecting abortion right creates profound inequality across the country. For this reason, a mass movement must emerge to tell U.S. lawmakers that overturning Roe will not be accepted and that abortion rights must be codified in federal legislation once and for all.

Our most urgent task as defenders of the rights of women and the working class is to ensure that this mass movement takes hold. Not even the unelected Supreme Court is immune to public pressure. They must be confronted with the reality that millions of women will greatly suffer while the rights to their own bodies are restricted. For the physical, mental, and financial well-being of women across America, this is a time of crisis.

It is now up to the people to defend abortion rights where legislators have failed. Wealthy state representatives are out of touch with the struggles of working women; so-called “pro-life” lawmakers have never seen the reality of enduring an unplanned pregnancy in poverty. People across all states must show solidarity with those living under the most extreme restrictions in order to build collective power. Access to healthcare of all types is essential for the collective wellbeing of society, and so we must demand it. Only when the public pressure becomes too great to go unnoticed will we win back our rights.