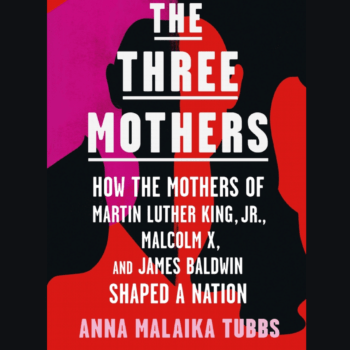 Book Review of The Three Mothers: How the Mothers of Martin Luther King, Jr., Malcolm X and James Baldwin Shaped a Nation

Note: reference to the violent racism of the Jim Crow South including assault and murder

Anna Malaika Tubbs writes The Three Mothers: How the Mothers of Martin Luther King, Jr., Malcolm X, and James Baldwin Shaped a Nation is the account of Black motherhood that has been missing from the narrative of civil rights history in the United States.

These three men, whose leadership and bravery changed the world, did not simply become who they were on their own. Martin Luther King, Jr.’s sister Christine explains how,

“Every now and then, I have to chuckle as I realize there are people who actually believe [MLK Jr.] just appeared. They think he simply happened, that he appeared fully formed, without context, ready to change the world…That’s simply not the case. We are the products of a long line of activists and ministers. We come from a family of incredible men and women who served as leaders in their time and place, long before ML was ever thought of.”

Martin Luther King, Jr., Malcolm X, and James Baldwin are the product of the leadership they saw in their mothers. Each woman’s “approach to motherhood was based on their strong beliefs and their political awareness…Alberta, Berdis, and Louise made decisions that were not arbitrary but instead reflected their deep awareness of their participation in larger systems,” posits Tubbs as she weaves the individual stories of each mother with their son’s lives and the political context of the times.

Protagonists in their own right, The Three Mothers tells the stories of Alberta King, Louise Little, and Berdis Baldwin and the families and communities that saw them grow. Detailed accounts of enslavement and resistance created the ethos in which each woman was raised. Jarring at times, the book lays bare the violence and brutality in the day-to-day lives of Black women living during Jim Crow, the Great Migration, and the civil rights era. Alongside stories of racism experienced by each woman are stories of the murders of men, women, and children in and around their communities. We read the stories of the men they loved and married and the challenges that came with those relationships. We learn of the deep love the mothers had for each of their children and the devastation felt at the loss of their sons.

The simultaneous storylines of each woman teach the ways in which their lives reflected each other, reflected the times and how they greatly differed. We learn about the similar and different ways they raised their children. We learn about their hardship, their successes, and their bravery.

Malcolm X learned bravery from his mother Louise who, while pregnant with him, stood down a mob of white men who bashed in her windows while she protected her children. He witnessed countless acts of radical courage like this during his childhood. Louise Little valued education and held high expectations of vocabulary development, emphasized unlearning content rooted in white supremacy and practiced independent study. She encouraged her children to be disciplined but think for themselves and to keep their faith but question authority.

Dr. Martin Luther King, Jr. learned activism from a long line of activists and ministers in his family. He grew up in Ebenezer Baptist Church, where he would famously lead, and where his grandfather grew the congregation from a small group to one of the most influential Black churches in the country. The church led boycotts and demonstrations and always stood up to racism even if it meant potential death. When Dr. Martin Luther King, Jr.’s grandfather died and his father became Ebenezer Baptist’s next reverend, the fightback legacy continued. Put simply, his family taught him to be an organizer. His mother, Alberta, always encouraged his dreams and demonstrated breaking the rules to help her son when it felt right to do so. She was his greatest cheerleader, always telling him that he was “just as good as anyone.”

James Baldwin was raised in extreme poverty in a household filled with the love of his mother and the pain of the undiagnosed mental illness of his step-father. As the oldest child, he was forced to work, run errands, and care for his siblings at a very young age. Spending so much time out of the home meant that he experienced racism and classism firsthand. He channeled the pain of racism and poverty into his love of words. His mother, Berdis, did whatever she could to support his dreams and education. Both James and Berdis faced their pain through reading and writing. His teachers and principal attribute his talent to his mother. Baldwin watched his mother bravely intervene and stand up to her husband on his behalf to allow him to follow his passion. She encouraged him to be exceptional, which gave him the strength to live the life of an artist on a writing fellowship in Paris.

Heavy at times, The Three Mothers is a thorough historical text that dives head first into the racist and sexist environments Alberta, Berdis and Louise confronted. As a parent, this book especially speaks to the necessity of being purposeful in raising a person who will stand up to make change. This is an inspiring book about the importance of radical motherhood—often undervalued and overlooked—and the women whose lives and impacts are erased and forgotten for the stories of their important sons. This book puts those lives in their proper context and gives thanks to the women to whom they can credit that impact.