Right wing trying to generate the challenge that will overturn Roe v. Wade–Militant movement needed to turn the tide 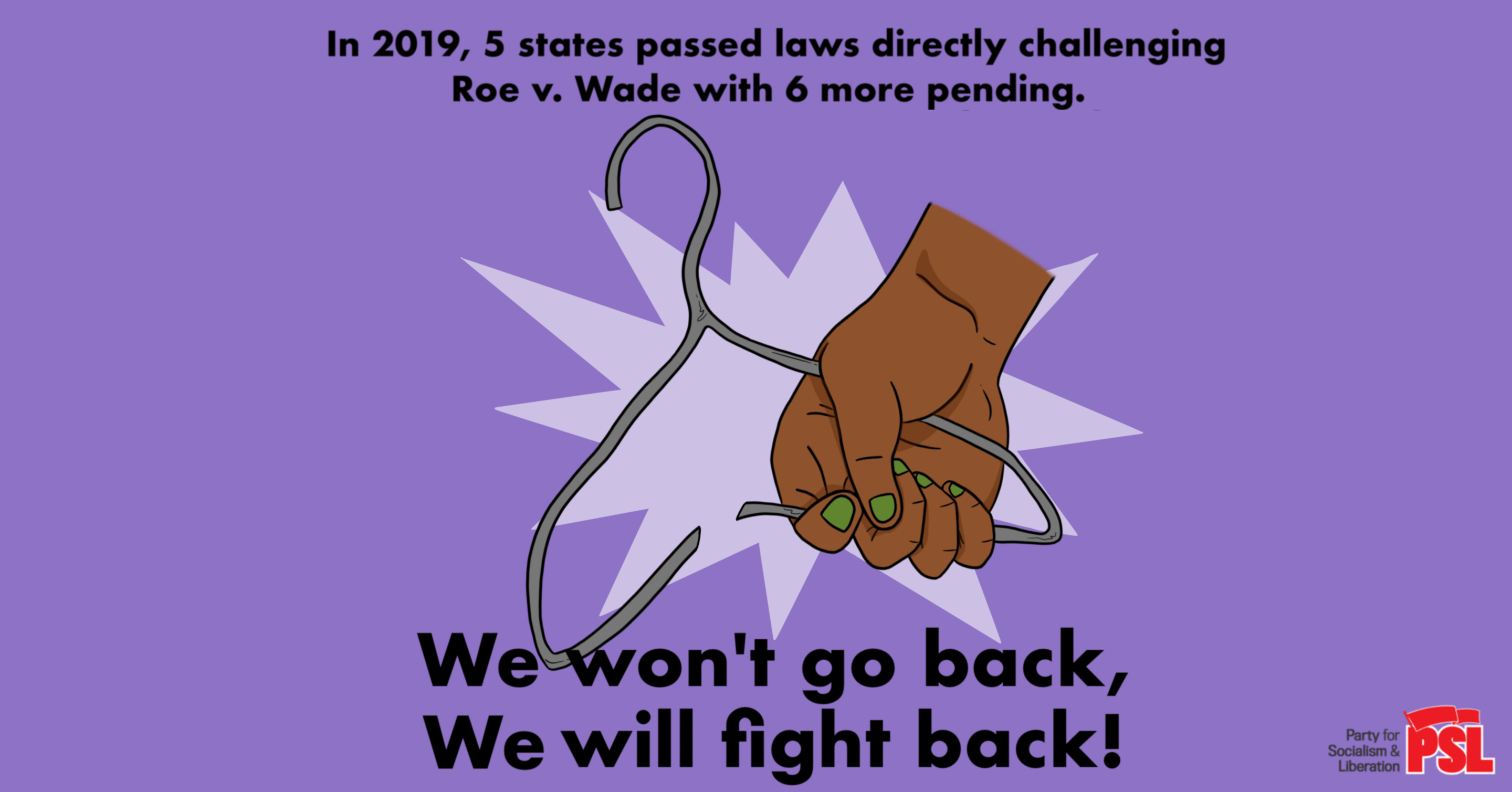 On Wednesday, Alabama Governor Kay Ivey signed House Bill 314, a near-total abortion ban, into law. The ban is the most restrictive anti-abortion law in the United States. It is also illegal.

Alabama’s abortion ban outlaws abortion at any stage in gestation and nearly all cases. This makes it a felony to perform an abortion at any stage in pregnancy. Doctors could be sentenced to life in prison for performing an abortion. The criminalization of the abortion procedure as a Class A felony would mean doctors could face up to 99 years in prison, which is potentially decades longer than the term many rapists serve in Alabama.

While the right-wing forces purport to be pro-life, nothing could be further from the truth. The real and central issues are control and oppression. Women are the targets of these particular policies, but the same forces targeting us support the incarceration of poor youth and youth of color at astronomical rates. The same forces actively support or do not ever resist the detention of young immigrant children and their separation from families.  They are not proponents of universal childcare or fully-funded public education. They care little for the fate of those who need abortions for a variety of reasons.

The state of Alabama is a prime example. The yellowhammer state ranks 49th in education. Sixteen and 17-year olds in the state are automatically charged as adults for certain crimes, like burglary. The right-to-work state has few protections for workers and only 7 percent of workers are unionized. It has the sixth highest rate of poverty in the United States, with over 250,000 children living in poverty in 2018. Over 22 percent of children live with food insecurity.

Abortion access and reproductive justice are health care measures that primarily serve the interests of poor and working people. The state government of Alabama, like the reactionary anti-abortion forces, clearly care little for the fate and well-being of poor and working class people. The abortion ban is just yet another piece of evidence to this effect.

2019 has been a year marked by an onslaught of stringent anti-abortion measures in more than a dozen states across the country. In the past few weeks, some of the strictest anti-abortion bills yet were signed into laws in several states- notably Alabama, Ohio, Georgia, and Missouri.

The barrage of anti-abortion bills in recent weeks signals an escalated reactionary attack aiming to dismantle Roe V. Wade and undermine reproductive rights altogether. The severe Alabama-styled abortion bans that make no exception for cases of rape or incest would punish rape victims or leave them without options. A recent article by Shannon Dingle for USA Today recounts her experience as a twelve-years-old who became pregnant after being raped multiple times. Dingle points out how abortion bans would have forced her to give birth to her rapist’s child.

Dingle compares her experience to a recent report of an 11-year old girl in Ohio who was allegedly impregnated after a 26-year-old raped her multiple times. Under Ohio’s new law, this young girl would be unable to receive an abortion.

In April, Ohio Gov. Mike DeWine signed a ‘fetal heartbeat’ bill into law, which bans abortion once a fetal heartbeat can be detected. Like Alabama’s ban, Ohio’s law does not include exceptions for cases of rape or incest. Ohio’s anti-abortion law isn’t the first time such a bill was passed into law. This year, three other states-Mississippi, Kentucky, and most recently Georgia and Missouri-passed similar bans.

These 6 week or eight week bans have been deemed ‘heartbeat’ bills–suggesting that at 6 weeks of gestation the embryo has a beating heart. However, science says that is far from reality. At 6 weeks of gestation, the embryo begins to generate a ‘flutter’ from a clump of cells that will become the heart’s pacemaker. This flutter would not be detected if a medical professional put a stethoscope up to the belly of the pregnant woman. Calling it a heartbeat bill gives credence to the idea that a tiny clump of cells is more important than a living breathing woman who really does have a heartbeat.

Falsely labeled anti-abortion bills have also so far passed one chamber in Louisiana, South Carolina, and Tennessee. The other measures introduced to state houses in Maryland, Minnesota, New York, Texas, and West Virginia have yet to get votes.

Lawsuits have been filed or are planned to block the laws in Alabama, Georgia, and Ohio. State legislators introduced these bills knowing that they would be challenged in court. Right-wing forces have set the stage to reverse Roe v. Wade hoping the abortion bans will be heard by the right-wing Supreme Court.

Despite the fact that the Roe v. Wade decision made abortion a legal right, many women still face obstacles in obtaining abortions. The first reactionary attack on Roe v. Wade was the nefarious 1977 Hyde Amendment that denied the use of Medicaid funds for abortion.  Over the last decade in particular, states have passed hundreds and hundreds of restrictive laws and other measure that decrease access to abortion access. The limitations range from laws effectively shutting down abortion providers to counseling requirements, extended waiting periods, restricted insurance coverage and state support for fake counseling centers that deceive people.

Anti-abortion groups and reactionary forces have been backing more aggressive restrictions since President Trump’s 2016 election, but their efforts have become even more brazen in 2019. They are pushing these new restrictive bills with the 2020 presidential elections now in sight.

Women’s rights and lives are on the line. History has show that there is a force capable to pushing back the reactionary offensive. That force is not the spineless and opportunistic forces within the leadership of the Democratic Party. The militant and independent women’s movement of the 1960s won the victory of Roe v. Wade in 1973 despite an all conservative majority Supreme Court.

Today’s offensive similarly requires the organization and mobilization of a broad sector of society, in the streets and workplaces and campuses and more. It requires that we stand strong against the forces that would seek to divide us–that we understand the struggle for reproductive justice as one that must stand against racism, homophobia, transphobia, and all permutations of sexism and misogyny.  It requires that we shout boldly and from every possible corner not only our right to abortion and birth control but to reproductive justice for all.