47 Years after Roe v Wade: Time to turn back the right-wing assault 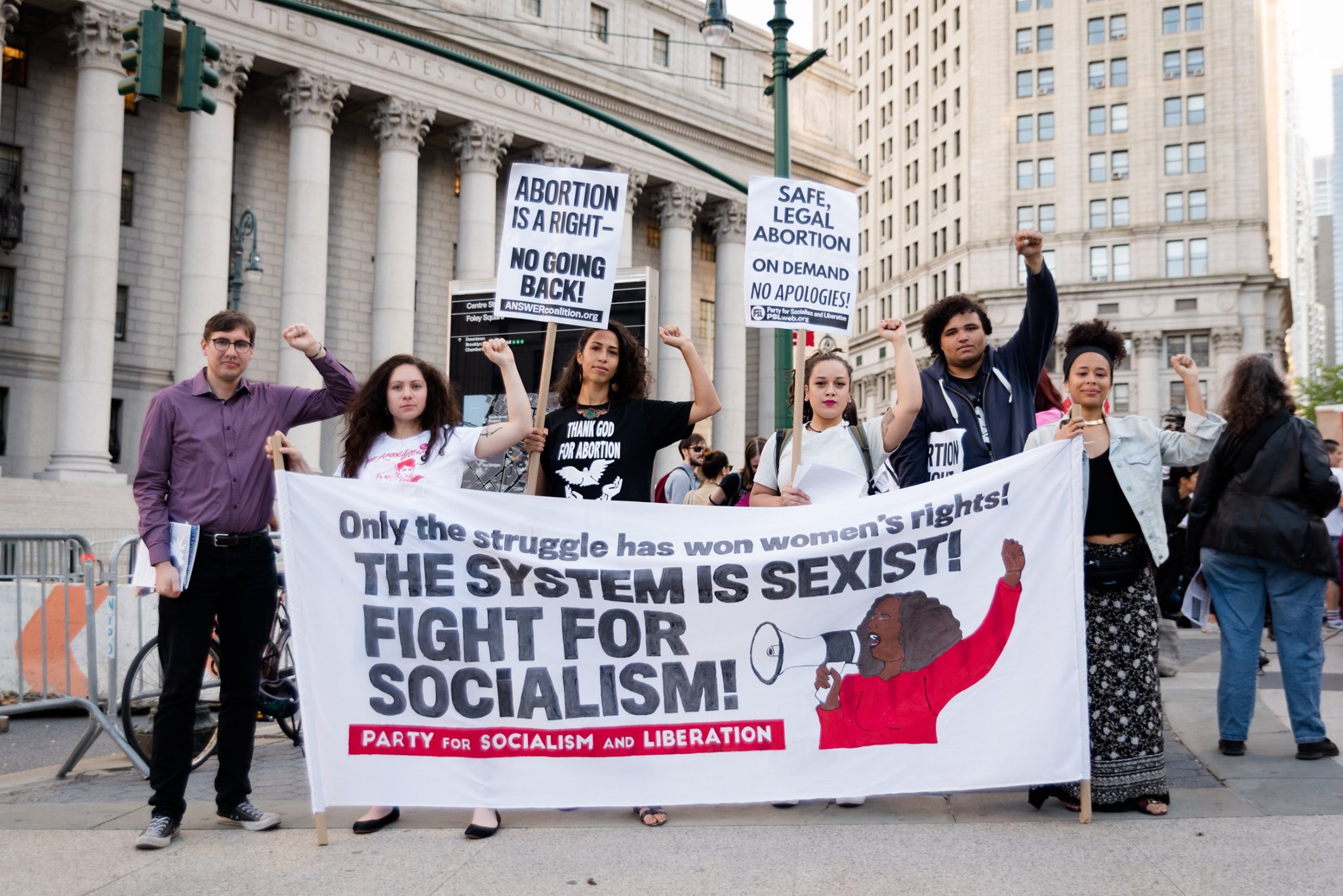 By Nathalie Hrizi, Editor of Breaking the Chains

Starting in 2008, Corinne Rocca and others working with Advancing New Standards in Reproductive Health at UCSF studied 667 women from a week after her abortion to five years later.

The women they interviewed generally represented women who get abortions. They were white, Black and Latina women from clinics across the United States whose average age was 25. Many were already parents; Sixty-two percent were raising kids. The researchers also looked at factors like relationships, histories of depression and anxiety, intentions to get pregnant, stages of pregnancy when the abortion was performed and levels of social support.

A different study at the same UCSF center, the Turnaway study has shown that being denied access to an abortion is what has negative consequences. Planned Parenthood agrees. Senior Medical Director Dr. Gillian Dean told Business Insider, “Evidence shows that being denied a wanted abortion can have greater emotional and physical consequences on a person’s health.”

Forty-seven years ago, on Jan. 22 1973, the Supreme Court decision in Roe v. Wade ensured the right to an abortion in the United States. Today, women who get abortions do not feel regret but they do feel relief. Women who are not able to access abortions suffer greater consequences. The majority of people in the most recent polls on abortion don’t support overturning Roe v Wade.

Since the women’s movement won the right to abortion, reactionaries have attempted to limit and do away with that right. Just three years later in 1976, the Hyde Amendment, limited the use of federal funds for abortion except for the most extreme cases. It chipped away at the right to abortion by denying thousands of poor women access to abortion.

The very same year, militant organizing in Buffalo, New York, shut down reactionary Operation Rescue’s attempts to intimidate and shutter reproductive health clinics in that city. The women’s rights organizations out-maneuvered and out-organized Operation Rescue. It was a major victory for the people’s movement over the reactionary forces that would see women return to property status.

In the latest iteration of attacks on reproductive rights, which expanded just over a decade ago, reactionary anti-women groups and politicians have sustained a political, legal and promotional campaign intended to moralize, stigmatize and deny access to abortion, as well as other reproductive rights.

The campaign has tried to paint abortion as mentally and emotionally detrimental while using unscientific, inaccurate and false language like fetal heartbeat and fetal pain to characterize abortion as violent. The studies and statistics that reveal the truth are important weapons in a propaganda war that is real. Actual medical science answers the pseudoscience of the right-wing myth makers who promote fetal flutters as real heart beats and try to invent fetal pain. The reactionary campaign has written their legislation, scribed articles and designed billboards based on lies.

Disregarding the rights, health and needs of women, the same campaigners have tried to enact legislation to limit access to abortion. TRAP laws (targeted regulation of abortion providers) have threatened abortion clinics with closure by requiring providers unneccesarily to have admitting privileges to nearby hospitals for example. TRAP laws also impose out-of-reach restrictions on clinics that have nothing to do with the needs and safety of their clients.

The Louisiana law that will come before the Supreme Court in March of this year reveals the detrminental effect TRAP laws have on abortion access. It requires all abortion providers to have admitting privileges to a nearby hospital. Only one provider does, and he has been so harassed and threatened that he made it clear he would retire if the law comes into effect. The law would effectively deny not only people in Louisiana access to abortion but those across the region.

The last decade has witnessed a whirlwind of reactionary attempts to pass anti-abortion laws in counties and states, and even an unsuccessful attempt to ban abortion in the city of Albuquerque, New Mexico, itself. Not all of these have been successful, and abortion rights organizers have scored some important legislative wins too.

Where do we stand now?

As of 2017, the majority of U.S. women live in a county with no abortion provider. Health care providers in 45 states are allowed to refuse to give women abortion. Eight states are required to give women literature on mental health “consequences” of abortion while California was just prohibited from requiring that non-medical anti-abortion centers provide accurate information along with their inaccurate information. Twenty-seven states require waiting periods before an abortion. While abortion is a right, access has been limited.

Abortion is not the only way that reproductive health rights have been targeted. Miscarriage has been criminalized in a number of states. Women, particularly women of color in the South, are being prosecuted for losing a pregnancy. Access to birth control as well as sexual education have also been targets of reactionary forces. The Supreme Court also just agreed to hear a case appealing a federal court decision to stop Trump administration rules that allows a wide range of for-profit employers to deny birth control coverage based on their religious beliefs. To be clear, non-profit employers were already able to access exemption on birth control coverage and the 2014 Hobby Lobby decision allowed for some for-profit companies exemption as well. The Trump administration is attempting to expand this exemption.

Since the Trump administration has appointed even more conservative judges to the Supreme Court, and federal courts, the anti-choice reactionaries hope to successful challenge and possibly overturn Roe.

They have written legislation that is guaranteed to be challenged. The language of an abortion ban in Kentucky even compares abortion to the Holocaust.  The Supreme Court refused to hear a challenge to a 2017 Kentucky law requiring abortion seekers to receive an ultrasound with a script read by providers, allowing the law to stand. More legislation is coming before the Supreme Court this year. On March 4, the Supreme Court will hear oral arguments in June Medical Services L.L.C. v. Gee which challenges the 2014 Louisiana law requiring abortion providers to hold admitting privileges. A decision is expected to be announced in June.

Over 200 congress people, including two Democrats, signed a brief on Jan. 2 asking the court to consider overturning Roe when they hear the June Medical Services case.

Anti-choice, anti-woman organizations and politicians fully intend to overturn Roe, but even reactionary forces have to recognize the unpopularity of that position and the obstacles that exist. Americans United for Life drafted the brief for the Congress members to sign. Katie Glenn, a lawyer for the organization, said, “No one is going into this case with an expectation that Roe v. Wade will be overturned.” They may not expect it but they certainly are working towards it.

We live in a society where 9 Supreme Court judges, sitting on a court that until very recently was solely composed of white men, hold the power to decide whether the population will have access to an absolutely safe medical procedure that has been practiced for hundreds of years. They are empowered to decide the fate of our reproductive control. That seems daunting. But, the court has turned to the right time and time again. Roe v Wade was threatened in 1992 and in 2005 and hasn’t been overturned.

It also shouldn’t seem daunting because history has shown us that the most powerful force in determining our fate is our own movement. In 1973, when the Supreme Court decided Roe v Wade in favor of the right to abortion, a militant women’s rights movement had been organizing for reproductive rights for decades. Underground networks of abortion providers worked to provide access to safe abortions because women were dying due to self-induced and botched abortions. Protests and other civil disobedience demanded not only abortion but all reproductive rights and other rights denied to women.

This movement was part of a broader movement in U.S. society rising up against the institutions of racism, sexism and homophobia. The 12 unelected men sitting on the Supreme Court didn’t gift all the rights that were won over that period. People had to organize and struggle and sacrifice to demand those rights, and then keep on fighting until they were won.

In 1992, it was organizing and militant defense that drove Operation Rescue–known for its violent attacks on women and abortion providers–out of Buffalo. In each instance that we have won rights for the masses of people, it has been because of the strength of mass organizing and movement building. Again, today, the struggle is again critical.

The sections of the women’s movement representing working-class women and women of color, the most oppressed women, have led the way in demanding reproductive justice. Reproductive justice means more than being able to prevent and terminate unwanted pregnancies–though this right is fundamental to our ability to participate in society as equals. It means being free from forced sterilization, a genocidal practice that has been imposed on Black, Native, Latina and disabled women. Fundamentally, reproductive justice means that we can also affirmatively choose to have children, and have the means and access to prenatal, birthing and postpartum care, and can house, feed and educate our children once they are born.

There are organizations and individuals across the country who have been doing the important work of taking action and building a movement for reproductive justice. Each attempt to ban abortion, to criminalize a woman for a miscarriage, to shut down a clinic has met with opposition, particularly on a local grassroots level. The question for us should be how to weave ourselves into a mass movement to take our demands for reproductive justice to even more militant and national levels. So that in the 48th year since Roe v Wade was decided, we stop the reactionary onslaught and instead strengthen a movement that can win true reproductive justice.