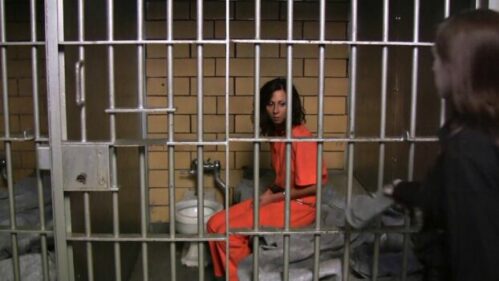 On July 31, 2018, Diana Sanchez gave birth alone in her cell in the Denver County Jail. Despite having notified the deputies and nurses at least eight times that she was in labor, and screaming out in pain, no one even called an ambulance. Instead, a call was placed for a non-emergency van to transport her to the hospital once all the jail’s new bookings were processed for the day.

Diana endured more than five hours of labor in her cell. When her water broke, the jail staff simply slipped a single thin absorbent pad under her cell door. With no other options, Diana spread out the pad on her cot and struggled to get one leg free of her pants before she delivered the baby herself, just feet from the toilet. Throughout the course of her labor, three deputies and two nurses watched on and off without ever intervening. When Diana was finally taken to the hospital after delivering her son, doctors told her she could have bled to death.

Diana’s story recently resurfaced in the news due to a lawsuit she filed against the city and county of Denver, Denver Health Medical Center, and several individuals. Intense media scrutiny forced Denver County Jail to add a policy “to ensure that pregnant inmates who are in any stage of labor are now transported immediately to the hospital.” However, the Sheriff Department cleared all its deputies of wrongdoing in Sanchez’ case. According to a spokesperson for the Sheriff’s Department, their own internal investigation concluded that deputies “took the appropriate actions under the circumstances and followed the relevant policies and procedures.”

In other words, they do not believe that Sanchez, in the midst of birthing, required anything more than a pad slipped under the door. While this admission is horrifying, it is an adequate representation of how the U.S. justice system views inmates under its care. Diana’s experience, though shocking, is not isolated. Similar cases can be found in jails and prisons across the country.

A report from In These Times details a number of horrific accounts from women who suffered miscarriages while incarcerated.

Bridgette Gibbs who, “despite telling staff of her history of miscarriages,” received no medical attention during two months of pregnancy at the Westchester County, NY, jail. Without a single prior exam, Gibbs went into labor early in her second trimester. Before being taken to the hospital, Gibbs was strip-searched and shackled at the hands, waist and ankles. She gave birth to twins handcuffed to the bed, and was still handcuffed hours later when she learned that her premature newborns had died. The hospital told her that the early labor was the result of a “treatable infection.”

The report revealed that another incarcerated young woman began experiencing extreme pain and knew something was seriously wrong with her pregnancy. Despite her pleas, the jail doctor did not take her seriously. The woman eventually was taken to the emergency room, where it was discovered her fetus had died previously, and she had to deliver it. Women’s reproductive health is systematically neglected in prisons across the country.

It is no secret that quality prenatal care and skilled medical care during childbirth are critical. The U.S. ranks 46th in the world for maternal mortality rates, and the stats are even worse for poor women and women of color. If a woman cannot afford or access prenatal care, her risk of pregnancy-related death jumps to 3-4 times the normal rate. In prison, where even basic healthcare is virtually nonexistent, quality and consistent prenatal care can be extremely difficult to access. Incarcerated women also commonly suffer from poor quality diets and high-stress conditions including invasive strip searches and prolonged solitary confinement–conditions that put pregnant women and their babies at increased risk.

Reproductive health care in prisons is becoming increasingly important as the prison population, and population of incarcerated women, continues to explode. The number of women in prisons has increased nearly tenfold in the past 40 years, and currently outpaces the growth of men in the prison system. Today, the United States is home to only 4 percent of the world’s women, but holds nearly 30 percent of the world’s female prisoners. Nonetheless, the justice system is paying virtually no attention to the special needs of incarcerated pregnant women. There is no data on how many pregnant women are incarcerated in the country and no database tasked with systematically tracking their care. While prisons are constitutionally mandated to provide adequate health care, the federal government has set zero mandatory standards or reporting requirements and maintains no oversight over the care of prisoners.

This systematic neglect of pregnant prisoners is a matter of health equity. Incarcerated pregnant women are at a juncture where racism, misogyny, reproductive justice, and mass incarceration converge.  The racist U.S. criminal legal system incarcerates Black women at twice the rate of white women. Nearly half of the women incarcerated in the United States are in local or county jails, and of that number, 60 percent, or some 72,000 women, have not been convicted of a crime but are waiting to stand trial. The main reason for having to await trial inside a jail is being unable to afford bail. Uncounted in these figures are the thousands more women detained without conviction by ICE, who are also being horribly mistreated.

Their immense suffering is a clear sign that this system is bankrupt. While policy changes are urgently needed to improve the welfare of these women and their babies right now, policy reforms can only go so far. The reality is that prisons under capitalism can never be just institutions.

Sanchez’ own story is evidence of this reality. She ended up in prison pregnant on a parole violation for an earlier conviction of identity fraud when she cashed a check made out to her sister. She suffered deeply and was caught in a negligent brutal system for the crime of being poor, really.

We need a new system–a socialist system–in which women, children, and all people have access to free and quality healthcare. A socialist system would have entirely different institutions oriented towards rehabilitation and restorative justice. Under this system, Diana Sanchez wouldn’t have been in prison in the first place. She was there for violating probation, which she was on for writing a bad check. Regardless of her actions, as a human being she would have access to quality health care, and any person who tried to deny it–like the sick cops inside the Denver County Jail–would be the ones facing prosecution.