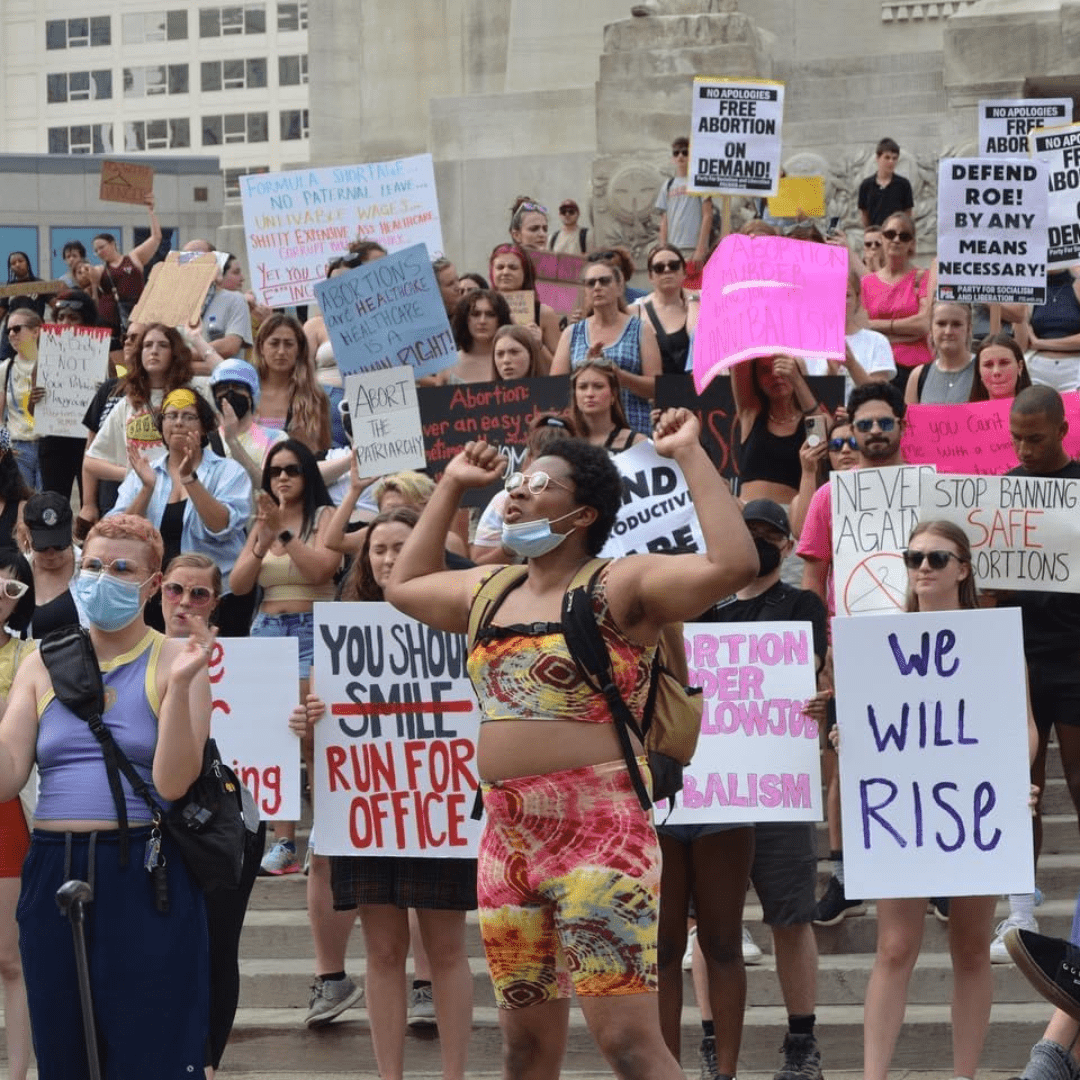 On August 5, Indiana lawmakers passed the first post-Roe abortion ban, prohibiting abortion after implantation. The bill, which is set to go into effect on September 15, narrowly incorporated exceptions in the case of rape and incest before 10 weeks of fertilization: to protect the life of the pregnant person, or if the fetus has a lethal abnormality. The law also bans abortion clinics entirely, mandating that all abortions must take place in hospitals or outpatient centers owned by hospitals.

In their rush to ban abortion, Indiana legislators failed to run the bill through any health-related committees, and the bill is full of inconsistencies and unscientific provisions. For example, the bill bans medication abortion after 8 weeks of pregnancy, even pregnancies covered under one of the bill’s exceptions. Abortion rights advocates say this will lead to mass confusion and a chilling effect as health providers attempt to make sense of the new law.

The struggle for abortion rights has been ongoing in Indiana, but it ramped up when the Dobbs decision was leaked in May. Thousands of people mobilized on less than two days’ notice to take to the streets in cities across the state. When the Dobbs decision was officially announced a month later, statewide protests erupted again. Pro-abortion rights advocates stood watch in the Statehouse from 25 July to 5 August, when the bill was signed, while others stood outside the building chalking pro-choice messages and talking about the issue to passersby.

State lawmakers, however, dismissed the people’s will. Multiple legislators cited their personal faith as the reason for endorsing the bill, explicitly dismissing the unpopularity of the action. Senator Rodric Bray suggested that unhappy Hoosiers should vote out the lawmakers responsible – never mind the gerrymandering that serves to uplift reactionary forces, or the fact that 32% of Indiana Senate seats currently up for election are unopposed.

In addition to the extreme restrictions on when and where abortions can be performed, the Indiana legislature also mandated that physicians lie to their patients. The bill requires physicians to inform patients that they may be able to “halt” or “reverse” the effects of medication abortion as long as they’ve only taken the first pill. The unscientific basis for this claim originates from one anti-abortion doctor’s flimsy study, and has not been endorsed by any legitimate medical bodies.

Representative Karen Engleman, who also supported removing the exception for rape and incest, was reminded that doing so would mean forcing young children into childbirth. She responded that forcing a 5th grader to carry a birth to term is actually doing them a favor, because it is “harmful to put a minor in the position of being the new Jane Roe.” Similarly, Representative Tim Wesco argued, “You cannot treat rape, one of the worst things that can happen to someone, you cannot treat that with abortion.”

Despite the far right using the excuse that leaving abortion legislation up to the states will simplify abortion law and give U.S. voters a say, the situation in Indiana proved the opposite. Divided right-wing legislators engaged in closed door debates and extended discussions into special sessions to determine whether or not to include the exceptions for rape and incest in the bill. The content of these debates is even more sickening in the aftermath of a 10-year-old rape victim from Ohio crossing state lines to receive an abortion in Indiana.

The people of Indiana largely support access to abortion. From a recent poll, 58% of Indiana voters support the Roe v. Wade decision, and only 27% said it should be overturned. This is not a trend unique to Indiana. Nation-wide, 72% of Americans support the Roe decision, and Kansas voters recently voted overwhelmingly to keep protections for abortions in the Kansas constitution.

Yet, when asked about a voter referendum on abortion in Indiana, the Senate President Pro Tempore Rodric Bray and bill author Representative Susan Glick shut the idea down. “It is a representative government that we have, and it’s our job to determine and communicate with our constituents and make decisions based upon that,” Bray explained, “We’re accountable to our constituents, and every four years at least over here in the Senate, they decide whether we stay or whether we go.”

In reality, Republicans in Indiana knew that if they posed this question for voters to decide, the people of Indiana would vote in favor of protecting abortion rights.

Far reaching effects of the bill

The ban introduced by Indiana lawmakers will have the most significant impact on poor and working class people. Indiana’s maternal mortality rate, third highest in the country and estimated to be twice that of the United States. on the whole, is 52 deaths per 100,000 births. This statistic is even higher in rural Indiana, at 76 deaths per 100,000 births. These rural areas are known as “obstetric deserts,” counties where there are no obstetric wards. Additionally, in 2018, Black women accounted for 18% of maternal deaths in Indiana while only contributing to 13% of births.

Indiana’s abortion ban will only make these statistics worse, demonstrating that so-called “pro-life” Republicans do not actually care about human life. Another example that exposes the hypocrisy of Indiana’s far-right legislators is that, rather than increasing support for families in the wake of the abortion ban, Indiana is building more baby boxes for unwanted newborns.

The devastating effects of Indiana’s abortion ban will spill over outside of Indiana. Illinois, which has already seen an uptick in out-of-state abortion seekers since Roe was overturned, will face additional pressure in light of the Indiana ban.

The Indiana bill sets an ominous precedent for post-Roe legislation. Not only does it eviscerate the rights of the people of Indiana, but it makes it harder for all Midwesterners to access abortion. Despite popular support for abortion rights, Republicans passed the bill through secret closed-door meetings and infighting, with no regard for the loss of lives that will result. It is clear that Indiana lawmakers are enemies of the people, and as the people we must make our voices heard. We cannot accept further draconian bans on a basic life-saving healthcare procedure. Abortion access is a human right. We must take to the streets and fight!