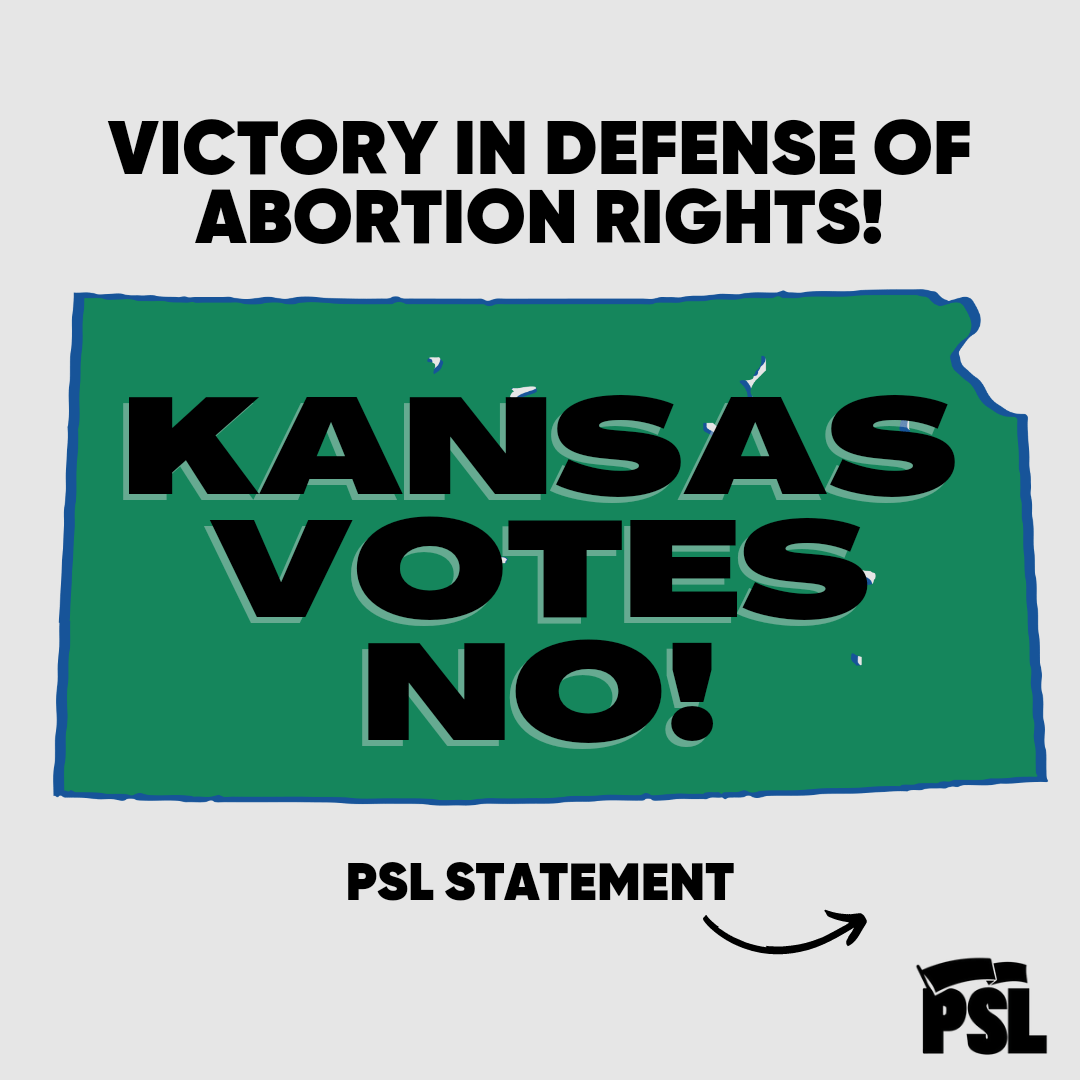 Kansans flooded the voting booths. Early in-person voter turnout was 250% higher than the 2018 primary midterm election and mail-in ballots doubled. With 76% of votes reported, over 60% of Kansas voters said “No” to a measure to remove abortion protections in the state constitution. This is a huge victory for the abortion rights movement in the United States just a month after the Supreme Court’s Dobbs decision that not only overturned abortion rights but signaled an expanded attack on democratic rights in this country.

The on-the-ground struggle in Kansas was powered by the determination of untold numbers of volunteers and activists, spearheaded by a statewide coalition of abortion rights organizations called Kansans for Constitutional Freedom. Party for Socialism and Liberation organizers joined with so many others who went door to door, called people night after night and spread their message on social media – urging a “No” vote on the referendum.

Kansas’ rejection of a far-right agenda on abortion rights is a victory for the whole progressive movement. It proves yet again that the elite and undemocratic Supreme Court along with the reactionary, billionaire-funded far-right do not represent the majority of the population. The majority supports abortion rights. This victory will serve as inspiration for the rest of the country as more battles in defense of abortion rights arise state by state, city by city, locality by locality.

The significance of this victory taking place in Kansas cannot be overstated. The state has voted Republican in every presidential election since 1964. It has long been a battleground for abortion rights. In the 1990s, Operation Rescue, an anti-abortion extremist organization that became well known for using terror tactics against doctors and women, launched the “Summer of Mercy” campaign in Wichita. For six weeks, Operation Rescue blocked abortion clinics and harassed women and doctors, making abortion a point of national debate and laying the groundwork for anti-abortion politicians to gain popularity. Then, in 2009, an anti-abortion vigilante assassinated Dr. George Tiller, a well-known abortion provider in Wichita who had been targeted for decades by Operation Rescue and other anti-abortion terrorists.

The referendum victory also exposes the politically shallow and false picture of the “red states” often painted by elite liberal publications and Democratic Party leaders. For instance, one highly influential book, “What’s the Matter with Kansas?” argued that the Democratic Party lost working class Kansans because of “social issues” like abortion and gay rights. For years, Democratic strategists cited it as a reason to cater to the right wing and downplay women and LGBTQ rights. Always based on flimsy evidence, this argument can now be decisively buried. A vigorous movement to expand and defend abortion rights — as a basic matter of autonomy, respect and democracy — can and must be waged in all 50 states.

Each battle in the defense of abortion rights, from the ballot box to pressure campaigns and street protests, is a critical part of a larger fight to defend democratic rights in the United States. The Supreme Court intends to take us back to the late 1700’s. The people of Kansas have now spoken with a clear voice, echoing the protest chant of the last few months: We won’t go back!