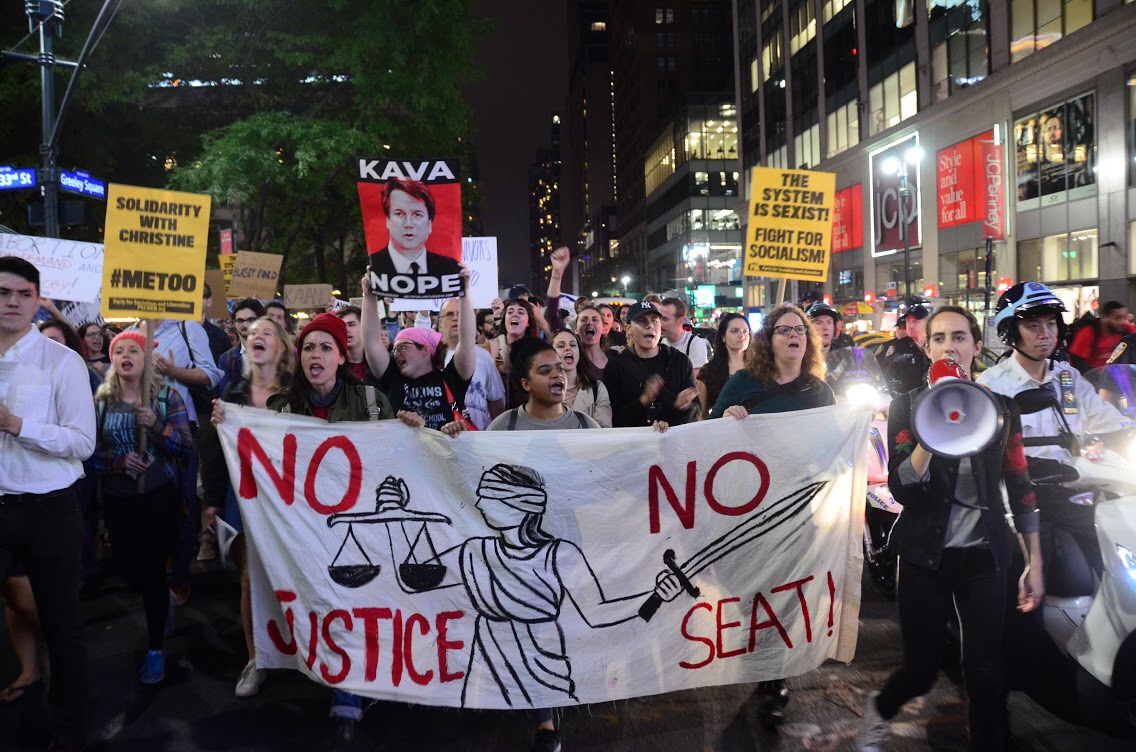 In spite of the mass opposition in the streets and in communities throughout the United States the U.S. Senate has confirmed arch-reactionary Brett Kavanaugh to be the ninth Justice of the Supreme Court. With rare exception the Supreme Court has over the past 200 years upheld the most reactionary aspects of U.S. capitalism – the enslavement of African people, the maintenance of an apartheid system following the Civil War, the granting of broad immunity for U.S. police departments as they carry out systematic violence against oppressed communities, the denial of women’s right to vote and a myriad of other efforts to suppress workers in the U.S. labor movement.

Kavanaugh’s confirmation is outrageous and truly undemocratic–a majority of voters polled now oppose him on the Court since the allegations of sexual assault and misconduct surfaced.

But the problem with the Supreme Court goes deeper than Kavanaugh. While some are suggesting Kavanaugh will “tarnish” or “delegitimize” an otherwise pristine institution, the truth is that the Court is undemocratic and reactionary to its very core.

The Supreme Court is portrayed as an impartial body, detached from society, above everyone, but we know this is not true. It represents a legal system that was created by the wealthy elite to maintain the rule of the dominant class. They created it and it operates against the interests of the vast majority in society. It is stacked, generation after generation, with Harvard and Yale graduates, with deep connections to corporate America and vetted by the political establishments of the two ruling parties.

Before the Civil War, it protected slavery — many of the justices were slaveholders themselves, buying and selling men, women and children in their free time while writing tracts about “justice” and “freedom.” In the industrial revolution, the Court became a vehicle for the railroad companies to bust up unions and the organizations of small farmers. Under Jim Crow, it defended segregation. When the ruling class was on the defensive in the 1960s and 1970s, and the people’s movements were rising, the Court granted some progressive reforms, but its recent history — Citizens United, Janus, the gutting of the Voting Rights Act — have all shown where it really stands.

The Supreme Court and other components of the “checks and balances” governmental system we learn about in school, in fact exists to prevent “too much” democracy. As Stephanie Fisher wrote:

“…the Supreme Court has been used to limit the democratic process in the interests of the ruling class. It ensures, for example, that no democratically elected Congress could ever pass a law that infringes on the right of the rich to own their wealth.” (The Supreme Court: Last Line of Defense for the Ruling Class.)

Regardless of which individual is confirmed as a member of the Supreme Court, the institution as a whole is inherently undemocratic and serves to protect the interests of the capitalist class. As such, it needs to be abolished.

Down with the sexist system!

Even before it became widespread knowledge that Kavanaugh had been credibly accused of attempted rape and other forms of sexual assault, it was no secret that he is a very reactionary judge who opposes abortion and could overturn Roe v. Wade. The bigger question is: why is it even an option to overturn women’s rights?

The system of capitalist “democracy” does not guarantee basic rights for women but uses our rights as a political bargaining chip.

Sexual assault, sexual harassment and other forms of gendered violence have deep roots in patriarchal class society, supported by the ideology of male supremacy. In this context, sexualized and gendered violence including assault and harassment are everyday occurences for women. Women are blamed for being victimized: Why did she go to the party? Why did she wear that dress? Why did she drink beer? Why didn’t she say no? Why didn’t she report the crime?

Women have been socialized to not report, not tell anyone about assault because it is seen as a “personal” problem and because women know that it is we, the ones who have already suffered assault, who will be put on trial–not the person who assaulted us.

That is why #MeToo and #WhyIDidntReport are powerful. Many women are saying we will no longer be silent.There’s a movement of people demanding our rights as part of a greater struggle for justice and equality.  Women and our supporters are rising up with long-suppressed anger to denounce and protest Kavanaugh’s confirmation.

We must resist the pressure to throw our support behind the Democratic Party, also known as “the lesser of two evils.” The argument that the President appoints Supreme Court justices–thus a Democratic president is preferable–is often used as the ultimate argument against voting for a socialist or working-class candidate. This argument contributes to the problem that it aims to address. By channeling people into a political system that is by its very construction anti-democratic, it undermines the effort to build a powerful, militant people’s movement.

The confirmation of a known reactionary and misogynist such as Kavanaugh should not be reason for despair. Our power is not measured in confirmation hearings. The Senate is a millionaires’ club, representing its own interests, not ours.

Our power is measured in the streets, in our schools, workplaces and neighborhoods. Despite its reactionary character, the Court has in its history made a few “progressive” rulings. These rulings, like all such rulings, reflect the balance of forces in the class struggle on a global scale, more than they reflect the exact composition of the court. When the working class movement for people’s liberation is strong, the court will grant a concession, not out of the goodness of their hearts, but because to do otherwise would be to throw fuel on the fire of the people’s anger.

Now is the time to be out in the streets. The system has exposed itself.