Not Just Rich People and Cafes: Toward a Socialist Understanding of Gentrification 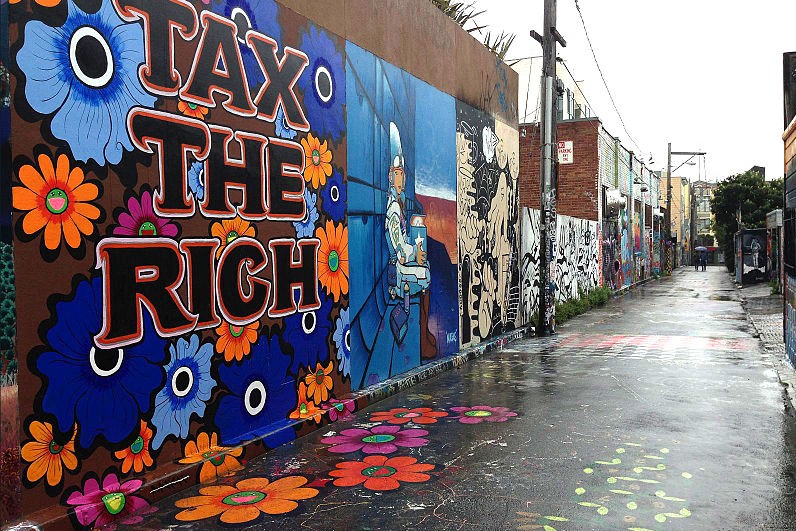 Gentrification is the systematic process of displacing poor people from a community and replacing them with more affluent people, all in the interest of profit. It has become a primary local policy of the representatives of the ruling class and is clearly carried out by the state. While it is clearly a policy, it is also an outcome of the capitalist approach to housing and development. Profit is king. People’s livelihoods and well-being are not considerations.

A serious socialist program for housing must unequivocally reject the idea that gentrification is a process caused primarily by an influx of white wealthier people and fancy coffee shops. They more serve as symbols that gentrification won. By the time wealthy people and coffee shops show up, the behind-the-scenes work for gentrification has already taken place. We should begin to correctly frame gentrification as a violent function of the capitalist model. A clear political alternative that can unify working-class people of all nationalities and keep housing affordable and safe for all is the answer.

Displacement of working-class people takes place throughout all stages of gentrification, and by various methods and tactics. In Washington, D.C., these have included intensive, racist, and anti-poor policing; increased parking regulations, rental property neglect and an uptick in slum conditions; the neglect and privatization of public housing; the elimination of family-sized units; the breaking up of multigenerational families living in one unit into smaller units; and the elimination of affordable units accessible to low-income families.

In Congress Heights in southeast Washington, D.C., developers seeking to build luxury apartments neglected a property until it became a slum, forcing tenants to endure toxic mold, flooding, infestations, trash pile-ups, sewage backups, and heat and air conditioning outages. Despite these conditions, the tenants had to continue paying rent or face eviction.

Slum-like conditions are maintained to force tenants to leave when they are no longer able to tolerate the horrible conditions. Additionally, because of the rising costs of rent in the private market, there are very few places that will accept vouchers or that offer quality affordable housing. As a result, many tenants end up living in dangerous conditions with no remedies.

The government, at all levels, is complicit in setting the stage for gentrification and often facilitating it. Developers who take over a depressed neighborhood and build high-cost housing units for the rich are rarely or never held accountable. They often receive exemptions from providing low-income or affordable housing and from restrictions that protect public interests. Local governments enact policies that facilitate gentrification.

In large urban areas, politicians in nearby areas are pressured to eliminate rent control and make way for luxury housing. Local politicians are also pressured to push forward development plans for the rich, not poor and working people.

The government acted as a slumlord itself when it purposely let public housing deteriorate and then sold it to developers for little to nothing. A BBC article on U.S. public housing noted: “In 1992, housing officials began receiving government grants to tear down and replace the worst public housing complexes. Housing agencies had demolished or otherwise got rid of 285,000 homes by 2012 and replaced only about a sixth, according to a report by the Center on Budget and Policy Priorities, a Washington-based research institute.”

For super-oppressed workers, like women, the lack of adequate housing deepens oppression, creating even more vulnerability to the brutalities of the capitalist system. Women often tend to be the leaseholders and are first in line to be subjected to mass evictions. Women with families have difficulty securing safe, habitable, and affordable housing due to the elimination of family-sized units.

At Brookland Manor in northeast Washington, D.C., private developer Mid-City Financial plans to demolish the existing 535 units of affordable housing on a property where working-class Black families have lived for generations. On the same 22 acres of land where 535 spacious and family-friendly units currently exist, Mid-City seeks to triple density by building over 1,750 luxury apartments. The plan calls for the elimination of all four- and five-bedroom units, thereby reducing the overall number of affordable units from the existing 535 down to 373, and restricting 200 out of the 373 affordable units to seniors only, 62 and older. This leaves 173 units left for hundreds of families that currently live on the property, many of them already living in units that are too small for the number of people in their household.

Displacement at Brookland Manor is additionally facilitated by armed, private security. Developer Mid- City hired armed private police that patrol the property and police the community ahead of the planned redevelopment. Private police forces play a major role throughout the city in furthering displacement through intimidation and the enforcement of rules–such as no standing on the grass, no leaning on the fence, no sitting outside and more–in order to run up infractions and give eviction notices. These rules either did not exist or were not enforced on the property prior to the beginning of the planned redevelopment. Once the rules are enforced, tenants are found to be in “violation” of their lease agreement and subsequently evicted.

In their attempt to clear out properties ahead of redevelopment, landlords take every opportunity to force evictions. One of the most tragic cases at Brookland Manor is that of Karen Reel, whose son Coby Reel tragically committed suicide at their home at the Brookland Manor property. After her son’s funeral, she received an eviction lawsuit. The “notice to quit and vacate for violation of lease” stated: “You and/or your household members have engaged in criminal activity that threatens the health, safety, or peaceful enjoyment of the premises by other residents. … MPD responded to a self-inflicted shooting and an unregistered weapon was found.”

Through violent means, working-class Black families and communities are displaced in and from the nation’s capital, as part of the process of gentrification. Gentrification is a housing policy of the capitalist class, managed by the bourgeois political infrastructure. It is a process led and controlled by developers with politicians managing community relations. The politicians insist to the public that development is necessary to increase the supply of housing to meet the demand. However, in Washington, D.C., for example, there are 40,000 people on the public housing waiting list. In other words, in the “free market economy,” because housing is a commodity, its supply is only available to those with greater purchasing power, and to all others, decent dignified housing is denied because affordable housing is not sufficiently profitable. In short, under capitalism, housing is a privilege, not a right.

In Washington, D.C., the main homeless shelter is D.C. General, an abandoned hospital situated between a jail and an STD clinic. Many young people and families live there for months or years waiting to get housing. Because the shelter system is insufficient to address the crisis of homelessness in the nation’s capital, the city contracts with hotels on New York Avenue, each of which cost over $27 million per year.

Meanwhile, the District government continues to sell and privatize public land and housing to developers for as little as $1, as they did in the case of the Wharf in southwest Washington, D.C., which was sold to known slumlord Geoff Griffis. The affordable housing crisis continues to grow while the city continues to sanction, facilitate and pay for the building of luxury developments at the expense of working people.

City police play a major role in the process of gentrification similar to the role of private police forces. In 2007, when the city was still predominantly Black and working-class, an all-hands-on-deck approach was implemented by the Metropolitan Police Department. Both uniformed and plain-clothes police were given license to “jump out” and harass anyone in the community, especially in communities deemed “Red Zones,” or high-crime areas.

Basically every neighborhood where working-class and poor people lived was considered a red zone, and the policy stripped the rights of everyone who happened to be caught in those areas even if they lived there. During this period, many arrests were made for possession of marijuana, which played a major role and was a go-to reason for unwarranted searches. Marijuana became legal in the district after the mass criminalization of Blacks had filled up the courtroom just a few years prior.

Such brutal actions against the working class in the name of profit essentially amount to a human-trafficking- like process, where working-class people are exploited, imprisoned and moved in accordance with the agenda of the wealthy owning class.

It is critically important to debunk the myth that the private market can solve the affordable housing crisis that afflicts every city in America. People need to hit the streets and fight to defend and extend quality public housing. Our demands must include an end to the privatization of public housing and the organization of existing resources to immediately eradicate homelessness.

A socialist program for housing must provide a clear alternative: a public option. As socialists, we fight for the protection and expansion of state-of-the-art public housing. The cost of housing should be based on a reasonable percentage of one’s income, for which they could opt in to public housing as an alternative to the outrageous costs of private market housing. Under socialism, gentrification would become obsolete because housing policy would be determined by the needs of people, not the profit margins of developers. Housing is a human right and necessary for survival.