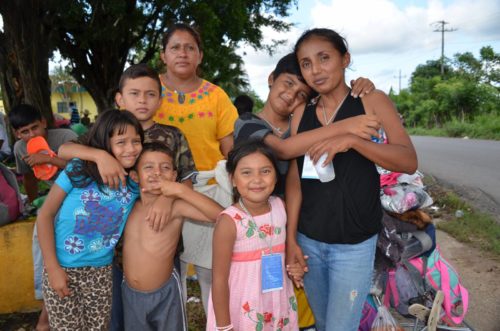 As many as  7,000 people, traveling by foot in a caravan, have left Honduras and are  making their way towards the U.S./Mexico border, seeking asylum. The decision to leave one’s  country, family and everything familiar is not made easily. The trek is very dangerous; many are assaulted and killed and never make it to the U.S.  If they do reach the U.S. they are in danger of being sent back, jailed, separated from their families and/or having their children taken away from them. Yet, every year, thousands of migrants attempt the journey to come to the U.S. because the trek is not as dangerous as their daily lives in their own home country. Honduras, El Salvador and Guatemala have the highest rates of violence in the world. Violence and poverty are the main reasons migrants are forced to flee. In addition, many migrants are economic refugees unable to find jobs or work with decent pay in their home country..

About half of the caravan is made up of women and girls who in addition to fleeing poverty are also fleeing widespread sexual and gender-based violence. Honduras has one of the highest rates of femicide in the world. One of the most common forms of violence against girls and young women in Central America is sexual violence perpetrated by gangs. In areas where gangs dominate, women and girls are in constant danger of sexual violence. Gangs use rape as a tactic to control the areas where they are present and to punish those who do not comply with their demands. Teenage girls are forced into relationships with gang members and those who resist face violent retribution or even death.

A migrant woman in the caravan, Orbelina Melendez, said that she is leaving her country because of the violence and extreme poverty she and her family are experiencing.  She said that her husband was murdered in front of her when she was pregnant. She has five children and is fleeing Honduras to find work and escape further violence. Although she is only 30-years old she is already considered too old to be  hired and most employers prefer to hire men. She says “I want a better life for my children” and that is why she joined the caravan.

Imperialist pursuits such as the U.S. backed and supported coup in Honduras, in 2009 ousted the democratically elected President Manuel Zelaya,  leading to the destabilization of the government in Honduras and creating an atmosphere where organized crime, violence and poverty took root.  U.S. political interventions, military coups, resource exploitation, and policies of economic neoliberalism have only served to further destabilize the entire region of Central America which has created a climate where paramilitary-backed drug cartels have been able to thrive.

Throughout the trek, Mexican citizens have pledged their solidarity with the caravan of migrants by providing them with food, transportation and medical assistance.  In the town of Huixtla, Mexico, locals provided bottled water, food, clothing and medical attention. Some in the caravan have said that they have eaten more on their journey than they did at home. Between the local government, charity groups and citizens, an estimated $8,000 is  spent for each day of food for the caravan. Mexican citizens in nearby towns are strategizing to offer help to the migrants as they arrive at their towns. In the town of Pijijiapan in Chiapas, Mexico, near the Mexican-Guatemala border, the townspeople organized and responded to the arrival of the migrants by offering them food, clothing and shelter.  In the mountainous region of Veracruz, Mexico, a group of women called “Las Patronas” are also organizing and awaiting for the arrival of the caravan. “Las Patronas” have a long history of feeding and clothing migrants from Central America who travel atop a freight train named “La Bestia” that winds its way through Mexico towards the U.S border.

Instead of speaking up for the human rights of immigrants and asylum seekers, the Republicans and Democrats are using the plight of the migrant caravan as a political football to sway voters before the midterm elections. Pandering to his racist supporters, President Trump has ordered troops to the border to “defend” the United States from this unarmed caravan of asylum-seekers.

Regardless of whether an individual qualifies for asylum, they should be treated with respect for their human dignity. We maintain that no human being is illegal; we demand full rights for all immigrants. The borders are open for capitalist enterprises to cross at will in order to find the highest rate of profit. The borders should be open for workers seeking a better and safer life.  Migrants should not be treated as criminals but should be treated as human beings with rights which must be defended.