She Who Struggle: Rosina Corrothers Tucker 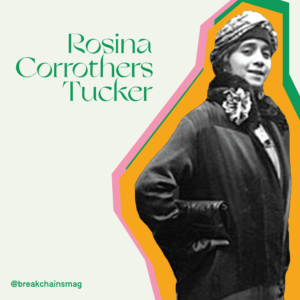 Sometime in the early 1920s, African American sleeping car porters filed into the house at 1128 7th Street. As they sat together, they discussed urgent matters in hushed tones. The host, Rosina Corrothers Tucker, warmly welcomed in the last person and then looked out the window sharply, scanning for Pullman’s spies. The daring topic? The visitors were discussing plans for organizing the Brotherhood of Sleeping Car Porters, which would be the first African American trade union recognized by the AFL-CIO. Swiftly, Corrothers Tucker pulled the shades shut, and joined the discussion for planning and organizing one of the greatest labor victories in U.S. history.

Rosina Harvey was born on November 4, 1881, in Washington, D.C. At 18, she married the eminent poet James Corrothers, and they moved to New York City, then Michigan, then Washington D.C., where Rosina worked as a music teacher and served as the organist for Liberty Baptist Church. In Lexington, Virginia, Rosina wrote her own music as well; in 1902 E.F. Droop and Sons published her “Rio Grande Waltzes”, five pages of sheet music that drew inspiration from the Viennese waltz.

After James Corrothers passed away in 1917, Rosina moved back to Washington D.C., where she worked as a file clerk with the federal government. This was where she first became involved with the labor struggle. In 1918, she met and married Berthea Tucker, who worked as a Pullman car porter. They did not know it at the time, but this union would cement Rosina’s destiny as an instrumental figure in the formation of the Brotherhood of Sleeping Car Porters.

Rosina Tucker met the Black labor leader Phillip A. Randolph in the early 1920s when she and her husband Berthea joined his nascent union, the Brotherhood of Sleeping Car Porters. Pullman Palace Car Company was a formidable foe for the Brotherhood to face. It was one of the largest and best-paying employers of African Americans, and touted itself as a contributor to Black economic mobility in America. In reality, most of the generous pay came from tips the porters received from white train riders, and porters could work up to 400 hours a month without overtime pay. Pullman also had a reputation for surveilling and retaliating against union activists, which meant union activity had to be kept clandestine, as many prospective members were afraid of losing their jobs.

Rosina Tucker’s home at 1128 7th Street became the center for undercover meetings for the union. Rosina herself was a liaison between Randolph and the Washington local branch of the Brotherhood, and would deliver messages to the union men about the progress the union was making to obtain better working conditions for them. She disseminated union literature to the wives of Pullman porters to raise their political consciousness and nurture household support for the union. As Rosina herself said, it was essential “that Pullman porters’ wives be cognizant of their husbands’ working conditions. The porter’s home had to be a union home. Without a union home, the porter could not be a good union man.”

Understanding the powerful role women could play in the labor struggle, Rosina co-founded a local chapter of the International Ladies’ Auxiliary six weeks after the foundation of the local Brotherhood chapter. The Ladies’ Auxiliary openly held fundraising events to support the union, including parties, dances and dinners. Rosina did not stop there either; she saw the Ladies’ Auxiliary as an excellent opportunity to organize women workers. She worked with the Washington Women’s Trade Union League and the National Negro Alliance to organize a boycott against racial discrimination in the grocers’ trade. Corrothers Tucker supported WTUL’s efforts to organize unions for laundry workers, domestic workers and restaurant and hotel workers, occupations which were largely held by African American women. Rosina received some criticism from her auxiliary for being a “union woman,” someone who was actively participating in labor efforts, as opposed to a “union wife,” a woman who did not work for wages and supported her union husband from the sidelines. Rosina responded, “I think it is very lady-like to belong to a union. And the next best thing to it is to belong to a union man.”

Right under Pullman’s nose, Rosina and the Ladies’ Auxiliary laid the foundation for unionization. When her activity finally became known, she had visited around 300 porter homes in D.C., performing various union activities and trying to recruit more members to the union. In retaliation, Pullman fired Rosina’s husband, Berthea. Furious, Rosina personally confronted her husband’s supervisor in his office. She described the scene in her own words:

“I looked him right in the eye and banged on his desk and told him I was not employed by the Pullman company and that my husband had nothing to do with any activity I was engaged in … I said, ‘I want you to take care of this situation or I will be back.’ He must have been afraid … because a [B]lack woman didn’t speak to a white man in this manner. My husband was put back on his run.”

In large part thanks to Rosina’s fundraising and organizing efforts, the Brotherhood of Sleeping Car Porters won a charter from the AFL-CIO in 1935 and became the first African American union recognized by the labor organization. In 1937, the Brotherhood signed an initial contract with Pullman that raised salaries, decreased hours and introduced a grievance process.

Rosina’s commitment to the labor movement and civil rights never flagged. In 1941, her friend A. Phillip Randolph asked her to help organize the first March on Washington in protest of discrimination in the defense industry. The threat of that march was so powerful that Franklin D. Roosevelt signed a bill banning discrimination in the defense industry before the march even happened. When it came time for the second March on Washington, Rosina was a key organizer at 82 years old and watched Martin Luther King Jr. deliver his “I Have a Dream” speech. She passed away at the age of 105 after a century of struggle, in 1987.

Rosina Tucker’s vibrancy is best summed up in her own words. When asked by a young reporter what it was like in her day, she responded, “In my day? This is my day.” In an unfinished autobiography she wrote,

“Today is my day, as it is your day. Although I live far removed from the time when I was born, I do not feel that my heart should dwell in the past. It is in the future. While I live, let not my life be in vain. And when I depart, may there be remembrance of me and my life as I have lived it.”