She who Struggles: Salawati Daud 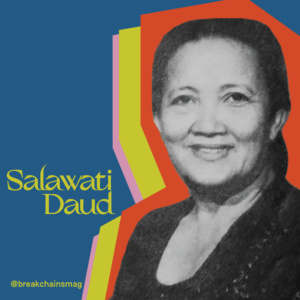 Salawati Daud was born in the early 1900s. The information available on this freedom fighter is too sparse; in a 2018 documentary film, she is honored as one of the “Unremembered” in Indonesia’s fight for independence. Despite that, what information is available reveals a woman dedicated to the struggle for her country for national independence and for socialism.

The Japanese invasion of the country, which had been colonized by the Dutch and was known as the Dutch East Indies at the time, contributed to the expansion of a building movement for independence. New Indonesian institutions (such as local neighborhood organizations) strengthened a sense of nationalist pride and turned against Dutch occupation. It was in this time of growing Indonesian nationalism that Salawati Daud would find her own place in history.

Daud joined the pro-republican People’s Sovereignty Party and served as editor-in-chief of a newspaper on women’s issues called Wanita (Woman) in 1945. She circulated the newspaper in Dutch-occupied Makassar and kept support for independence alive in the occupied region. She and her friends started “Team Information” to campaign against the occupation in South Sulawesi. She took up arms against the Dutch, leading an armed raid on the police barracks in Masamba.

In response to the growing independence movement, the Dutch recruited counter-insurgency expert Raymond Westerling to “pacify” unrest in Makassar, which consisted of terrorizing villages and executing suspected resistance fighters against the Dutch. The “Westerling Method” was responsible for the death of thousands of innocent Indonesians in South Sulawesi. Salawati Daud was openly stood against the brutality and filed a petition in protest of Westerling’s “pacification” campaign. After four years of bitter fighting throughout Indonesia, the Dutch government relented and agreed to meet with leaders of the revolution to discuss the future of Indonesia in the Dutch-Indonesian Round Table Conference. After the conference, Salawati Daud was elected mayor of Makassar, becoming the first female mayor in Indonesia.

During the early years of the Indonesian revolution, Daud had become a leader in Gerwanis, a women’s organization that advocated for marriage reform, equal labor rights and gender equality. Gerwanis differed from other women’s organizations at the time because it believed that women’s issues extended beyond marriage reform and the home and connected women’s issues to labor issues and political education. Gerwanis was one of the few organizations that advocated for poor rural women on issues beyond marriage reform, and Salawati became recognized as a strong leftist voice in the organization. By 1954, Gerwanis was explicitly socialist, wanting to “belong to a different movement, a truly politically conscious women’s organization”. The strength of Daud’s leftist politics led to her placement on the list of candidates for the Communist Party of Indonesia, and she became a member of the House of Representatives of Indonesia in 1955.

Gerwanis met a tragic demise in 1965 during the military coup that ended Indonesia’s progressive government. The military coup in Indonesia brutally slaughtered anyone who was a communist or a communist sympathizer, ultimately taking 500,000 to 1 million lives. The Gerwanis were specifically targets of the Lubang Buaya myth, a malicious and misogynistic smear campaign that accused them of sadistically torturing and murdering six generals, which General Suharto used as the catalyst for overthrowing President Sukarno. Salawati Daud was jailed, along with many of her comrades who were also leaders of the Gerwanis. While in prison, Daud never lost her kindness nor fervor for justice; she intervened against the mistreatment of her fellow inmates.

Salawati Daud is an example of a woman who gave selflessly to the cause, uninterested in whether or not she would personally receive recognition. Salawati Daud, who died in 1988, remains an inspiring example of the revolutionary women of Asia who committed their lives to building a more just society. Comrade Salawati Daud, ¡presente!