She Who Struggles: Elizabeth Gurley Flynn 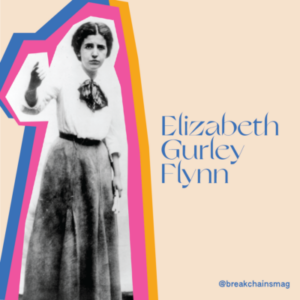 Women from Everett Mills flooded the streets of Lawrence, Massachusetts on January 11, 1912, carrying banners crying, “We want bread, and roses too!”. Workers faced hunger and deeper poverty because of a 32 cent reduction to their weekly pay. The women workers of the Bread and Roses strike refused to let corporate interests starve their families!  Marching alongside the workers was labor activist Elizabeth Gurley Flynn, who became instrumental to the victory of the Bread and Roses strike.

Elizabeth Gurley Flynn was born to working-class socialists on August 7, 1890. Politically active from a young age, she dropped out of high school at 16 to become a full-time organizer with the Industrial Workers of the World (IWW). At the Bread and Roses Strike, she masterminded a move with Bill Haywood that was central to the strike. They sent hundreds of starving children from the strike to sympathetic families in New York. The effectiveness of this strategy drew the ire of capitalist-aligned forces in Lawrence, and when Flynn and her comrades tried to send another 100 children to Philadelphia, city authorities deployed militias and police. The police attacked defenseless mothers and children mercilessly, clubbing them and dragging children away from their mothers. The brutality of the strike gained national attention. On March 1, the mill capitulated and met most of the workers’ demands, including a 15-percent increase in wages and increased overtime compensation.

Elizabeth Gurley Flynn once said that, “The IWW [Industrial Workers of the World] has been accused of pushing women to the front. This is not true. Rather, the women have not been kept in back, and so they have naturally moved to the front.” In admiration, author Theodore Dreiser called her an “East Side Joan of Arc.” Her passion for women’s struggles motivated her to co-found the ACLU, and later to join the CPUSA, where she wrote a feminist column in the Daily Worker. She spearheaded a campaign for equal pay and daycare for working mothers during World War II, and ran for Congress in 1942.

Elizabeth Gurley Flynn’s fierce commitment to working class struggle stemmed from a love of her country and its people. In her own words: “ I fell in love with my country – its rivers, prairies, forests, mountains, cities and people. No one can take my love of country away from me! I felt then, as I do now, it’s a rich, fertile, beautiful land, capable of satisfying all the needs of its people. It could be a paradise on earth if it belonged to the people, not to a small owning class.” Indeed, Flynn was never far from the frontlines of labor struggles. She traveled up and down the East Coast organizing with miners, silk weavers, garment workers and restaurant workers.

In 1950, senator Joseph McCarthy launched an anti-communist campaign that attacked and arrested members of the American Left, accusing them of spying for the Soviet Union.  In 1951, under McCarthyism, Flynn was accused of plotting to overthrow the US government and jailed for two years in Fort Alderson, Virginia. She wasn’t deterred by the prison sentence. After her imprisonment, she was elected the national chairwoman of the CPUSA in 1951. She frequently made trips to the Soviet Union, where she was when she passed in 1964.

Throughout her lifelong commitment to the struggle for communism and workers’ rights, she made critical contributions to labor struggles in the United States. Moreover, she deeply understood the struggles of working women across the country. Her tactics during the Bread and Roses strike struck a chord with the American populace – to remain passive in the face of capitalist exploitation is to forfeit the futures of our children, and is to forfeit our futures altogether. Comrade Elizabeth Gurley Flynn, presente!