She Who Struggles: Harriet Tubman 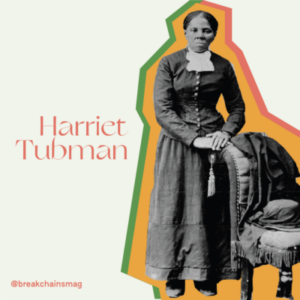 On the night of June 1, 1863, three gunboats stealthily made their way up the Combahee River to assist enslaved African Americans with escape along the shores of Beaufort, South Carolina. In the dark, 150 men disembarked from the John Adams gunboat, following the lead of a woman. As the raid began, chaos ensued – the fugitives ran towards the shore while Confederates shot at them, people were trying to grab a hold of crying babies and children, and pigs and chickens began to squeal and squawk. In the midst of the pandemonium, a voice broke through the air singing an abolitionist song, and the confusion calmed down. On the deck of the John Adams stood Harriet Tubman, the leader of the Combahee River Raid. Her leadership of the raid allowed 700 people to escape slavery that night.

Harriet Tubman was born around 1820 in Dorchester County, Maryland. She is one of the most iconic figures of the Civil War era, and is most popularly known for her role as a conductor on the Underground Railroad. In 1849, she escaped from slavery using the Underground Railroad. Her recollection of crossing the border into Pennsylvania was one of unbridled relief: “When I found I had crossed that line, I looked at my hands to see if I was the same person. There was such a glory over everything; the sun came like gold through the trees, and over the fields, and I felt like I was in Heaven.”

After her own escape to freedom, Harriet Tubman dedicated her life to the liberation of enslaved African Americans. Over the next ten years, she helped 300 people escape slavery through the Underground Railroad and never lost a single “passenger”. She was a woman of iron discipline – when someone decided to turn back, she would point her gun at them and say “You’ll be free or die.”

Most people’s knowledge of Harriet Tubman’s contributions to history end with her participation in the Underground Railroad. Working as a conductor was but a fraction of Harriet Tubman’s tremendous legacy – her revolutionary commitment to emancipation was a lifelong one. She was comrades with the abolitionist John Brown – he referred to her as “General Tubman”, and asked for her advice on his heroic raid of Harper’s Ferry in 1859. When he needed recruits for his fighting force, Harriet Tubman aided him by recruiting former slaves in Southern Ontario. Harriet Tubman knew that the emancipation of African Americans would not be won easily, and she staunchly supported John Brown’s mission. She is said to have remarked that, “[H]e done more in dying, than 100 men would in living.”

When the Civil War broke out, Harriet Tubman served as a spy in Confederate territory. Because she could not read nor write, she had to memorize all the information she gathered about warehouse locations and ammunition stores. When Tubman led Union soldiers during the Combahee River raid, they managed to evade torpedoes because of her unparalleled knowledge of the landscape. Without her, the Union soldiers could have been blown to bits.

Harriet Tubman received national recognition for her service during the Civil War, but the US government never compensated her. After the passage of the Dependent and Disability Pension Act of 1890, she began receiving a pension only because she was the widow of a black Union soldier. It is a lasting shame that such an incredible woman was forced to sell baked goods to survive while she put her life on the line for the cause. In her later years, she threw herself into suffragist causes and worked with Susan B. Anthony and Emily Howland. When someone asked if she believed women should have the right to vote, she responded, “I have suffered enough to believe it.” She died on March 10, 1913.

Harriet Tubman’s life was one dedicated to the service of humanity, and opposed racism and sexism in its most violent forms. She was militant, driven, and unafraid to sacrifice for justice. Comrade Harriet Tubman, ¡presente!