She Who Struggles: Haydee Santamaría 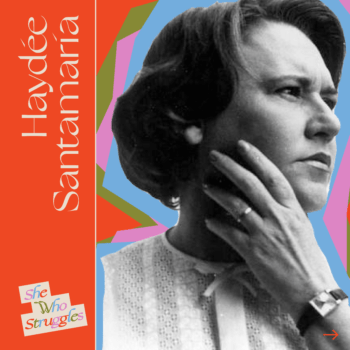 During the storming of the Moncada fortress on July 26, 1953, “The struggle at the hospital was a tiny one, but very great. It was a struggle in which we had already planned, seeing no way out, to die without a single bullet in our rifles. When it became apparent that there was no escape and that the main battle was over – we could tell by the sound of the shooting dying away – Abel [my brother], who was directing us, made the decision to stay and continue the resistance. He told me: ‘The longer we keep on fighting here, the more of the others we will be able to save. There is always one fighter who must die without a bullet left in his rifle – if a bullet hasn’t gotten to him first’”.

This was the situation Haydee Santamaría found herself in, fighting not only for her own life, but the lives of her escaping comrades as well, as she awaited capture or death at the hands of the Batista forces. A key organizer of the assault on the Moncada military base, Santamaría helped lead the first strike against the dictatorship of Batista in Cuba. Haydee, her brother Abel, and her fiancé, Boris Luis Santa Coloma, were among those captured on July 26th. Abel and Boris were brutally tortured and killed in prison, and Santamaría was incarcerated for eight months.

Santamaría was imprisoned and tortured with her comrade Melba Hernandez, a time that she described as “a state worse than living or dying.” She was haunted by the torture and murder of her brother and her fiancé – facts that the Batista soldiers would taunt her with. Yet Haydee did not bend to tyranny. Right after the Moncada rebels had been captured, when soldiers came to her with her brother’s bloody eyeball and threatened to tear out the other if she did not give them information, she responded, “If you tore out an eye and he did not speak, much less will I.” When the soldiers sneered that they had tortured and killed her fiancé, she answered, “He is not dead, because to die for one’s country is to live forever.” She did not know whether any of her other comrades were alive or dead, but chose to keep her faith and loyalty with the revolution. Her bravery touched the heart of Fidel Castro, who recounted her words in his famous “History Will Absolve Me” speech. In utter admiration of her character, he declared, “Never before has the name of Cuban womanhood been raised to such a high place of honor and dignity.”

Haydee Santamaria became introduced to the cause for Cuban independence through her beloved brother Abel. After attempting to become a nurse and short while working as a teacher, she left behind her conservative petit bourgeois family to join Abel in Havana, Cuba, in the early 1950s. It was here that she met Abel’s comrade, Fidel Castro, and became involved in the planning of the Battle of Moncada. It was a challenging thing to be one of the first to participate in a world-changing revolution; Haydee wrote that “At Moncada we were beginning a battle without the people’s support – or if they were behind us, we had no way of knowing. We were fighting without the support of our own families. We were considered fools in those moments when we brought pain to those we loved, and we were sorry for the pain we caused them… and sad to think that our children might remember it as the mad act of fools.”

After her imprisonment at Moncada, Haydee continued performing underground activities for the revolution. She and her fellow ex-prisoner and comrade, Melba Hernández, printed and smuggled Fidel Castro’s writings from the prison where he was being kept. They fought with paper and with guns  – Haydee was a co-founder of the Mariana Grajales Women’s Platoon, an all-female military platoon that was composed of 13 young women who were essential to the revolution’s victory over Batista forces on September 28, 1958. When the Batista regime finally fell on January 1, 1959, Haydee became one of the few people who were involved in every stage of the Cuban Revolution, from its inception to its victory.

In her reflections on her political convictions, Haydee wrote, “… gradually we saw the need of creating a new man, a new consciousness. How was it to be done? Well, by changing the system, and letting the new system change the man… my idea of being a Communist does not mean only joining a party; it means having an attitude toward life.” It was this attitude toward life that compelled Haydee to remain loyal to the Revolution, even when all hope seemed lost at Moncada. Haydee was tremendously compassionate and believed in the sanctity of human life; at the Battle of Moncada she saw a wounded enemy soldier and pleaded with two doctors to go with her and try to save the man. The first refused, saying that he did not want to risk his own neck for the enemy – she heatedly argued that war had laws, and the enemy had the right to be treated. A second doctor was swayed by her words, and went with her through the gunfire, only to discover that the man had already died. When Haydee was put on trial, she was accused of hindering physicians from helping wounded enemy soldiers. To her shock, the doctor who had accompanied her supported the claims, and falsely stated that she had stopped him from helping soldiers. However, the first doctor, who refused to help the enemy, was so outraged by this false accusation that he stood up and vehemently refuted the other doctor’s testimony, defending Haydee’s compassion.

After the revolution, Haydee put her energy into founding Casa de las Américas, a cultural keystone of post-revolutionary Cuba. Casa has housed countless artists and writers seeking sanctuary from persecution and military dictatorships in their homelands. Haydee’s internationalist approach elevated Casa to international recognition. According to Uruguayan poet Mario Benedetti, there was not a painter, musician, writer, or singer who did not know Haydee’s name and her commitment to the liberation of all peoples. By welcoming artists around the world to Casa, culture in Cuba flourished, and Casa de las Américas is now the best-known and most prestigious cultural institution in Cuba.

Haydee carried the ghosts of Moncada with her, especially the loss of her brother, for the rest of her life. On July 28, 1980, she took her own life. She once wrote, “Moncada achieves greatness through the courage of those who die and those who live. Moncada would have been nothing without the courage of those who died there and those who lived.” Haydee Santamaría’s life was the epitome of a courageous one. Even in the revolution’s darkest moments, even after losing those she held dear, she dared to fight for a better world. Comrade Haydee Santamaría, ¡presente!