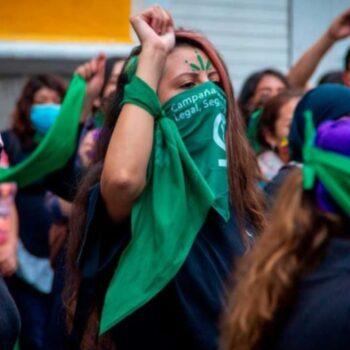 This article is re-posted from LiberationNews.org

Verónica Cruz of the Mexican women’s activist network Las Libres declared, “We aren’t afraid. … We are willing to face criminalization, because women’s lives matter more than their law.”

Cruz and other women in her organization say they will help bring U.S. women seeking abortion from Texas and other parts of the U.S. into Mexico, where abortion is now legal. They are also committed to providing women with medication abortion drugs — bring abortion pills into the U.S. or send them by mail.

Despite the risks and illegality of their activism, these women view it as their duty to help women access their human right to abortion. Is Cruz willing to go to jail for this? “If that’s the only way that people will become conscious that what the government is doing is a major violation of human rights,” Cruz said, “then yes.”

This is especially relevant to women right across the border in Texas. In December, the U.S. Food and Drug Administration lifted a major restriction on the medication abortion pill mifepristone, allowing patients to receive the drug by mail after a telemedicine doctor consultation. The day before that ruling, however, Texas passed SB 4, a law that nullifies the FDA’s judgement for women in Texas.

SB 4 adds harsh penalties of jail time and fines up to $10,000 for anyone who prescribes mifepristone through telehealth or who sends it by mail, unless done before seven weeks, which is before many women even realize they are pregnant.

Will Texas actually be able to enforce this law? Women have always found ways to get abortions. Las Libres is challenging the restrictive law with international women’s solidarity. Overseas networks such as Aidaccess.org and Women Help Women already exist to circumvent restrictive laws.

The United States is moving backwards on the issue of abortion while the rest of the world moves forward. Even in majority-Catholic Latin America, abortion bans are being rolled back. This year Mexico’s Supreme Court voted to decriminalize abortion, a big win for the mass feminist abortion rights movement in the country.

For 21 years, Las Libres, which means “the free ones,” has been helping women access abortion in a deeply Catholic country where abortion was treated as a crime. The increasing accessibility of medication abortion, as opposed to clinical abortion, made it easier for the group to commit civil disobedience and provide Mexican women with a way to terminate pregnancy.

An abortion ban not only provides avenues to prosecute women and activists for abortion, it also restricts access to medical information and burdens women with fear and shame. Las Libres not only provides abortion pills, but also medical knowledge and psychological counseling to the women they help.

The women of Las Libres are not alone in their activism. They are part of a larger Mexican feminist movement with many groups addressing abortion needs. This movement prioritizes the needs of working-class women.

When abortion is restricted, it only becomes inaccessible to poor and working-class women. Rich women find avenues to pay for expensive illegal abortion with low risks and high levels of comfort and support during the process.

Acompañentes (companions), or women from abortion-providing collectives such as Las Libres, Las Bloodys, and Las Confidentas, are fighting for aborto libre (free abortion), a concept seen as part of women’s liberation and reproductive justice — the right of women of all class backgrounds to access what they call “luxury” abortions.

As expressed by an abortion acompañente, “For zero pesos you can come to my house, and I’ll make sure you’re comfortable, that you have snacks, a hot water bottle, and Netflix. … It’s ridiculous. How is it that only the rich have access to this kind of support?”

Women in Latin America, where abortion is still highly restricted, have always had to be creative at finding ways to terminate their pregnancies. Brazil became the birthplace of medication abortion when the drug misoprostol, now prescribed by doctors alongside mifepristone for any medication abortion, became a popular method for terminating pregnancy.

In fact, working-class Brazilian women first began using the drug not as an abortifacient, but as a form of birth control. It was only years after this practice began that the Brazilian government caught on and restricted access to the drug, which was originally intended to treat ulcers.

The abortion pill was revolutionary

The introduction of misoprostol was revolutionary for Las Libres and other abortion activists, said Mexican feminist Giselle Carino. Women could now manage their own abortions at home, and rather than looking for sympathetic doctors and clinics in every case, though groups continued to work with allies in the medical community. Acompañentes could simply distribute pills, which are available over the counter in Mexico, although for a high price.

Las Libres workers have boxes of the drugs, received as donations or bought, and always kept handy. Each woman who reaches out to the group is assigned an acompañente to bring her pills and then follow her, through video calls, phone calls or WhatsApp messages, through every step of the abortion.

Activists overcome the costliness of the drug by using the medication saved from a previous woman who donated unused pills after her abortion. In this way, the goal becomes not only to provide abortions to every woman who needs it, but also to build solidarity between women.

Mexican women cite the Jane Collective in the United States

Women in the United States also found clandestine ways to terminate pregnancy in the years before Roe v. Wade. Across the country networks defied the law and directed women who needed abortions to safe providers willing to risk the law.

Mexican acompañentes today cite the Chicago-based Jane Collective, founded in 1965 by 19-year-old Heather Booth, as a source of inspiration. Jane was a highly discreet group of young women who responded to the abortion bans at the time by learning how to perform abortions themselves, safely, for hundreds of dollars less than doctors charged at the time. Jane’s goal was not only to broaden access to abortion, but “for the liberation of women in society.”

Jane dissolved after Roe v. Wade legalized abortion across the country. Today, with heightening attacks on abortion by the right-wing, the Supreme Court is poised to overturn the historic abortion ruling.

Las Libres is spearheading the international working women’s solidarity that American women will need if Roe is overturned. The fight for abortion rights is an example of the need of working-class women across the world to unite to defeat rightwing attacks here and elsewhere.