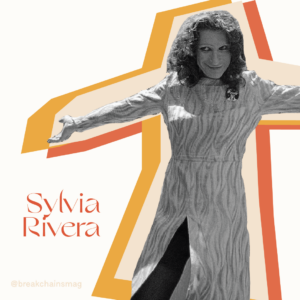 Sylvia Rivera was born into a world that was not willing to accept her. From the beginning, she fought for her right to exist. Rivera was born in New York and orphaned at 3. She was sent to live with her grandmother, who would beat her for wearing makeup. At the tender age of 10, Rivera was turned out onto the streets and hustled as a sex worker outside of Times Square in order to survive. At one point, she was jailed on Riker’s Island, on the charge that she was a “perpetrator of gay crimes.” Living on the streets, she formed a community with other poor trans youth and became known as Sylvia. In 1963, she met transgender activist Marsha P. Johnson, who Sylvia said “was like a mother to me.”

Most know of Sylvia Rivera as the woman who threw the second Molotov cocktail at Stonewall. In actuality, it is unknown whether she was even present at the first riot. But what is true is that 16 year-old Rivera did not sleep for six nights afterwards, declaring “I’m not missing a minute of this – it’s the revolution!” The events of Stonewall marked her initiation into the movement for LGBTQ liberation, and set the stage for her life’s work. It is undeniable that Sylvia’s tireless battle for the inclusion of working-class, homeless, incarcerated and trans individuals in the gay liberation movement has etched her impact into the hearts of countless LGBTQ youth and the pages of history.

Sylvia Rivera’s activism was heavily shaped by her class position and her own experiences with homelessness, drug addiction, and the sex trade. Rivera co-founded STAR (Street Transvestite Action Revolutionaries) with Marsha P. Johnson to uplift a community that was largely left out of the mainstream gay liberation movement – the unhoused. Most notably, as a part of STAR, Johnson and Rivera rented a building at 213 Second Avenue in the East Village for unhoused queer youth to stay without worrying about making rent.

Rivera was passionate about advocating for those who were often shut out of the gay rights movement of the 1970s, which she criticized as too focused on middle class experiences and not enough on the lives of working class queer people. These challenges made many in the movement uncomfortable, and some gay rights groups refused to allow her to speak at their events. For example, after she smashed the front lobby desk at the New York Gay and Lesbian Community Center while advocating for homeless LGBTQ youth, Sylvia was banned from the Center. The movement’s resistance to Rivera’s demands to include the marginalized frustrated her deeply, which she expressed in her famous “Y’all Better Quiet Down” speech, saying:

“I have been beaten.

I have had my nose broken.

I have been thrown in jail.

I have lost my job.

I have lost my apartment.

For gay liberation, and you all treat me this way?”

Because she operated from such a marginalized position, Rivera often found herself challenging more mainstream and middle class leaders and activists within the LGBTQ movement at the time. She initially supported pushes for the Gay Rights Bill in New York, arguing that it would include protections against gender discrimination. Such advocacy for transgender issues was unheard of at the time. Much to her disappointment, these protections were dropped from the Gay Rights Bill, which passed in 1986. A section of the leadership of the LGBTQ movement at the time strategically dropped the demands of the most oppressed sectors to make their political demands more palatable to the public, potential donors, and the establishment. The LGBTQ movement represents oppressed people of different classes. Often sections of the leadership are more oriented towards the Democratic Party and forces within the capitalist establishment whose interests are fundamentally opposed to those of working and oppressed peoples. Sylvia Rivera’s experience with the Gay Rights Bill were unfortunately too often repeated in the history of the LGBTQ movement. Trans people are still fighting to see their rights codified in bills and laws. The persistent struggle of activists like Sylvia Rivera in combination with the multinational and intersectional struggle of the masses of people is what brings progress. Where there is unity in the movement and working class solidarity, there is victory for all.

Sylvia was an advocate for liberation for all. She saw how struggles for gay liberation intersected with the struggles for universal housing and criminal justice. Undeterred by the oppressive systems that faced her, she dedicated herself to the struggle wholeheartedly and had a radical vision of a liberated society. After enduring the hostility and betrayal she faced within the gay rights movement of the 1970s, Rivera left activism and New York for 20 years. What she did in those 20 years is unknown, as information on her activity is scant. In the late 90’s, she returned to New York City and revived STAR in June of 2000 to hold a rally and vigil for Amanda Milan, a transwoman who was murdered outside of New York’s Port Authority Bus Terminal. She passed away in 2002 from liver cancer, an activist to the end. Sylvia Rivera, ¡presente!