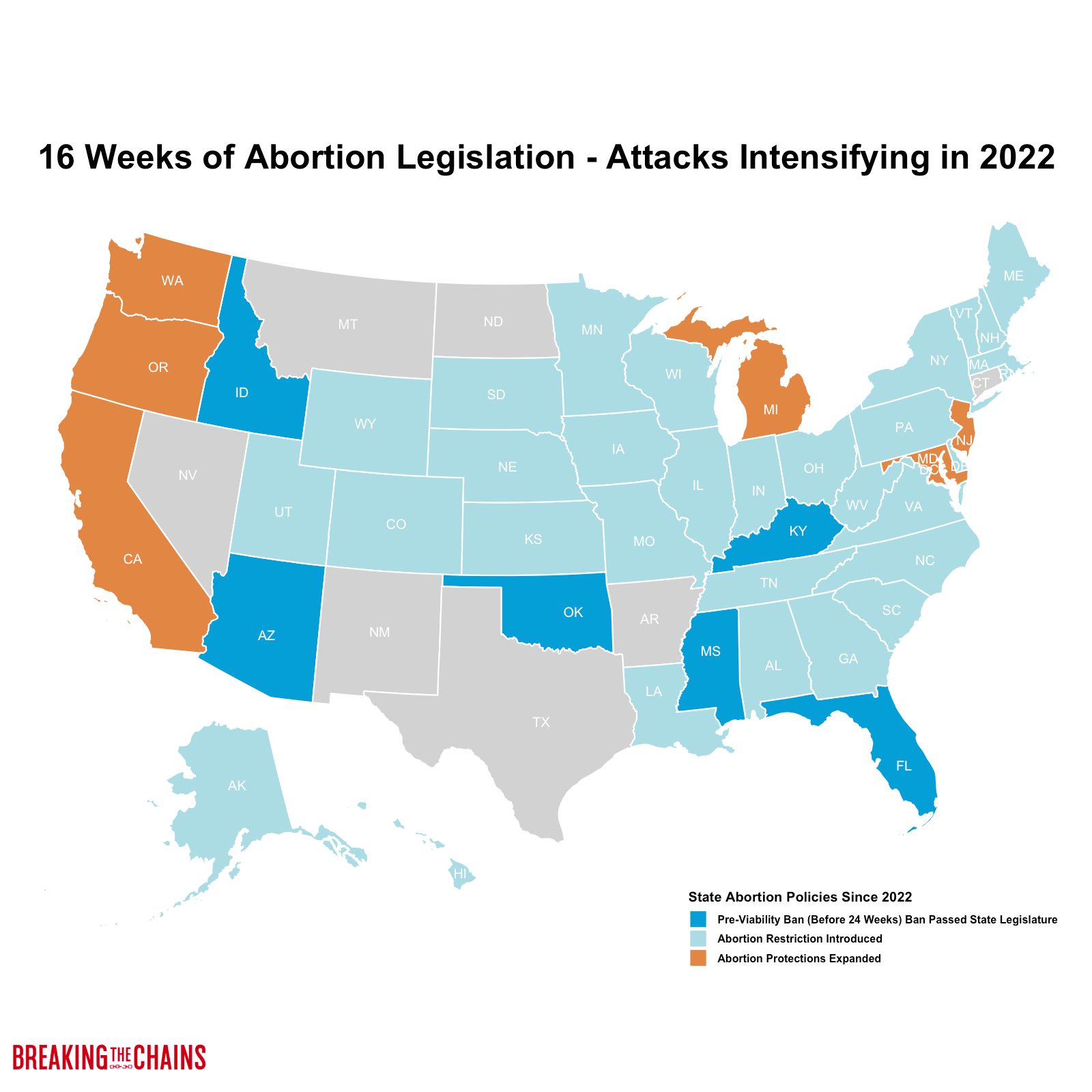 The year 2021 was the worst for abortion rights in almost 50 years according to the Guttmacher Institute, which gathers statistics on abortion. Now 2022 is shaping up to be even more restrictive. With the possibility of the Supreme Court overturning Roe v. Wade in June, Republican-dominated state legislatures are scrambling to pass laws severely restricting or denying abortion rights.

Many states are proposing and passing 15-week abortion ban bills. Arizona, Kentucky, Idaho, Tennessee, and Oklahoma have taken steps to criminalize abortion and curtail access. In some states right-wing extremists are even seeking to criminalize healthcare providers and advocates who help provide abortion pills through the mail.

The 15-week bans are a completely arbitrary marker having nothing to do with responsible medical practice. The 15-week bans are a calculated strategy to weaken or overturn a key part of Roe v. Wade and Planned Parenthood v. Casey, which rule that pre-viability abortion bans are unconstitutional. Government officials in Mississippi acknowledged that 15 weeks is too early for a fetus to survive independently, even with substantial medical intervention by today’s modern technology.

In reality, the 15-week bans put abortion out of reach for many working class women, especially in a country without access to reproductive healthcare, health insurance, child care or paid medical leave. When you add onto this the Hyde amendment, mandated waiting periods, fake abortion clinics and a shrinking number of clinics, access issues will become an even more serious if a 15-week cut-off becomes the law of the land.

In an effort to counter these attacks, a handful of states–Maryland, Colorado, Oregon and  Michigan–are proposing and passing legislation to protect abortion access.

Arizona: With Gov. Doug Ducey’s signature, Arizona became the first state this year to enact an abortion ban similar to the Mississippi law that the Supreme Court is debating. The law prohibits abortions after 15 weeks of pregnancy, except in cases of medical emergencies. There is no exception for rape or incest. It is poised to go into effect 90 days after the Arizona legislative session ends on September 22nd.

Kentucky: Kentucky legislators approved a law that would ban most abortions after 15 weeks, restrict access to medication abortion and make it more difficult for minors to access abortion. Although Gov. Andy Beshear vetoed the bill, Republicans in the state legislature overturned his veto and the law went into effect immediately on April 13.

Idaho: Idaho became the first state this year to sign into law a 6-week abortion ban similar to the draconian one passed in Texas last year. The law outlaws abortion after cardiac activity is detected, which is around six weeks of pregnancy and occurs before most women even know they’re pregnant. Similar to the Texas law, it allows private citizens, in this case family members, to take legal action against medical providers who perform abortions. Abortion providers and the regional Planned Parenthood sued to overturn this law. Without legal intervention, it will go into effect on April 22.

Tennessee: Meanwhile, Tennessee lawmakers are among the 20 states considering legislation that would make it more difficult to obtain medication abortions. Specifically, it would make it illegal for medical professionals and pharmacies to mail abortion pills and require women to physically visit their doctors to obtain abortion pills. The bill would also make it illegal for schools to provide the abortion pills. Those who break the law would be charged with a felony and face a $50,000 fine and 20 years in prison.

Oklahoma: Pledging to make Oklahoma the most pro-life state in the country, governor Kevin Stitt recently signed a bill into law that makes it a felony to perform abortions, except in cases where it’s necessary to save the life of the mother. There are no exceptions for rape and incest. Those who violate this law could face up to 10 years in jail and a $100,00 fine. It is expected to go into effect 90 days after the Oklahoma legislature adjourns on August 25th.

At the same time, organizers on the ground are pushing their state legislatures to protect abortion access, as well as preparing the ground for offering services for abortion seekers living in states with abortion bans. Recently in Texas, grassroots reproductive rights groups mobilized in defense of Lizelle Herrera, a woman charged for a self-induced abortion. (The charges were subsequently dropped). As a result of organized pressure, lawmakers in states like  Maryland, Colorado, Oregon, and Michigan have proposed and passed laws that would protect and expand access to abortion.

Maryland: The Maryland legislature proposed two major pieces of legislation to increase abortion access. One is the Abortion Care Access Act, which would earmark $3.5 million annually to train medical professionals to provide abortions and allow abortion procedures to be fully covered by most insurance. It was passed decisively by the legislature, where there’s a veto proof majority of supporters, and is headed to the governor for signature. It’s unclear whether the anti-abortion Governor Larry Hogan will sign it. The other bill would have enshrined access to abortion into the state constitution, which failed to pass the Senate.

Colorado: Gov. Jared Polis signed a bill that enshrines the right to abortion into Colorado law. This will ensure that abortion will remain legal in Colorado regardless of the ruling in Dobbs vs. Jackson.

Oregon: In anticipation of an influx of women seeking abortions from neighboring states with strict abortion laws, the Oregon legislature passed a law allocating $15 million to cover the costs for patients traveling to the state for abortions, as well as abortion providers.

Washington: On March 17, in preparation for the anticipated increase in women from Idaho seeking abortion services in the state, Gov. Jay Inslee signed House Bill 1851, which codified what two previous attorney general opinions have affirmed, that advanced registered nurse practitioners and physician assistants can provide abortion care within their respective scopes of practice. In addition, the state will not prosecute or penalize people based on pregnancy outcomes, nor take action against someone for aiding someone in getting an abortion. This is on top of a 1991 ballot initiative passed at that time to protect abortion rights in the event Roe were overturned.

As the attacks on women rights to control their bodily autonomy intensify working class people around the country must remain vigilant and continue to apply pressure on their local legislators to expand abortion access. Pressure must be applied on the Supreme Court prior to the ruling on Dobbs v. Jackson Women’s Health Organization in June. We cannot stand by and allow Roe to be obliterated or gutted by ring-wing politicians and legislators. Millions of women and supporters of women’s rights have marched in the past in this fight, and they could do so again.