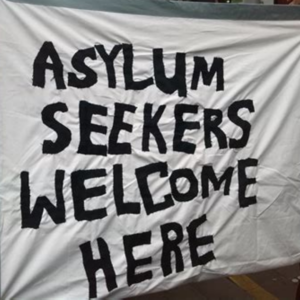 Nearly 14,000 Haitian asylum seekers are being targeted for deportation by the Biden administration after sheltering in a makeshift camp at the U.S.-Mexico border. Large numbers of these migrants are women and children for whom life in Haiti is especially dangerous right now due to ongoing crises and poverty-spawned violence. This is the largest mass expulsion of migrants and refugees in decades.

Just last month, Haiti experienced a 7.2 magnitude earthquake that took the lives of thousands and injured many more, leaving the capital of Port-au-Prince and surrounding cities and towns with food and housing shortages amid the destruction. These cataclymsic impacts come after months of political turmoil that both preceded and followed the assassination of former president-turned-dictator Jovenel Moise back in July. For years, if not decades, the nation’s infrastructure has struggled under the pressure of financial embezzlement and lack of social investment for Haiti’s majority poor population by corrupt misleaders.

The Biden administration is relying on Title 42, which uses COVID-19 as an excuse to not interview asylum seekers, in order to mass-deport Haitians. UN officials have challenged this action, calling this a violation of international law. On September 22 U.S. Special Envoy To Haiti Daniel Foote resigned, saying he will not be associated with the U.S.’s “inhumane, counterproductive decision to deport thousands of Haitian refugees.”

Biden could offer protected status to all Haitian refugees today. Instead, he allows Haitian women and children to be brutalized by border patrol agents, and families to be ejected into the middle of a crisis. In many cases, Biden’s immigration policies are more cruel than those of Trump. Within weeks of taking office, Biden deported more Haitians than Trump did in a whole year. Despite the conditions in Haiti right now, Joe Biden and Kamala Harris continue to tell Haitian immigrants to not come to the United States.

The horrifying images of Texan border patrol agents on horses whipping Haitian asylum seekers of all ages are reminiscent of images of enslaved Africans being brutalized by slave masters. They should remind us that the racist system that has historically propped up and enforced anti-Black racism is still deeply entrenched in all facets of U.S. law enforcement and governance.

They should similarly remind us of the struggle that Haitians have faced since successfully waging the Revolution of 1804 that toppled slavery and created the first free Black republic in the world. Since this victory, the imperial powers, notably the United States, have served to create the very conditions that have forced Haitians to flee to the U.S. for refuge. The constant cycle of intervention, propping up of misleaders and dictators (like former president Jovenel Moise), and the blatant exploitation of Haitian labor by U.S. imperialism has created a situation in which families have no choice but to seek refuge.

In many cases, the so-called “aid” that the UN, the U.S., and the international NGO sector has provided to Haiti amidst these numerous crises has only served to make matters worse. Countless instances of sexual abuse against Haitian women and children, or the “loss” of $500 million intended for post-2010 earthquake housing illustrate just that.

It is time the centuries of abuse of Haitians by the United States and its cronies comes to an end. The safety and security of Haitians should not be at the whim of U.S. foreign policy and intervention. We must fight the cruel and inhumane immigration policies under Biden with the same energy we fought them under Trump (and Obama), and we must fight the hand that creates the conditions in Haiti forcing families to flee in refuge in the first place.