How the fight for abortion rights began 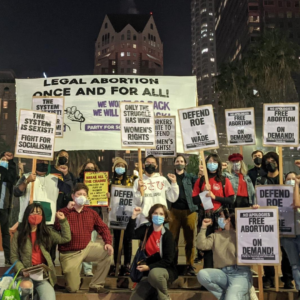 This article is based upon a talk given in New York City by Joyce Chediac at a PSL demonstration Dec.1 defending abortion rights. Chediac was a member of Redstockings, which organized the first public meeting on abortion in 1969.

It began in 1969 when each state had its own laws on abortion, all very limited. There was some talk on minor changes to these laws; panels on abortion were convened to report to legislatures.  But the “experts” on these panels discussing an issue with such heavy consequences for women were male ministers, clergy and lawyers. Women, those who gave birth to children and have abortions, were not considered “experts.”

Redstockings, a women’s liberation group which I joined, decided that women needed their own voice. They came to a New York legislative hearing where the “experts” were 14 men and a Catholic nun. These women demanded to testify. Women were the experts on abortion, they said because they are the ones who become pregnant and dealt with all the ensuing consequences.  But these “rude” women were turned away.  That’s when Redstockings decided to have its own hearing.

It was on March 21, 1969 in a church in New York’s Greenwich village that 300 people came to hear 12 women talk about their own abortions. These women spoke about the most personal things, things people didn’t talk about, and things that were illegal.

One women described what she suffered during an illegal ‘back-alley” abortion.  Another, unable to get an abortion, detailed carrying a pregnancy to term, and having the baby taken away for adoption. Another said that to get a legal abortion she paid two psychiatrists to say that she was mentally unstable and should not have a child. She called having this abortion the sanest thing she did in her life.

One woman, frail in appearance, described how she went to 11 hospitals before she managed to get a therapeutic (legal) abortion. The 10th one offered to make her a deal. They would give her an abortion if she agreed to be sterilized. She was 20 years old.

Women are the experts on their own bodies, the speakers said. Abortion should be free abortion on demand. This is not about a fetus, it’s about a woman’s right to control her body. Women can never be equal if they can’t control their own bodies

The testimony was met again and again with knowing responses from the audience.  After the on-stage testimony some in the audience who had originally come only to listen felt compelled to stand and share their own experiences with illegal, unanesthesized abortions.

This was the first public event {in the U.S}where women spoke out and demanded abortion rights.

Women were listening.  Speakouts spread nationwide with women sharing their own experiences and describing those of their friends and relatives. They detailed their painful and unsanitary illegal abortions, and how they sometimes needed hysterectomies as a result, leaving them permanently unable to have children. They spoke of friends dying when such procedures became septic. Even those who did not become pregnant described the disruptive character of pregnancy scares because one little sperm could change a woman’s entire life forever.

The struggle to legalize abortions was on. In addition to speakouts, there were demonstrations for abortion rights everwhere. Defying the law, women formed networks to guide their sisters to providers of safe abortions. Some women even learned how to perform abortions themselves. Four years later, in 1973,  Roe v. Wade became law. And that’s how it happened. Abortion was won in struggle by a mass movement.

Our movement has learned a lot of things since then.

We learned that in addition to women, trans men and gender non-conforming people have a right to choose abortion if they need it.

We learned that the question of access is crucial. If abortion is legal, but women can’t get it, it might just as well be illegal. Just three years after abortion was legalized the Hyde Amendment was passed by a bipartisan vote, denying abortions to poor women, women on Medicaid, women in the military, women on any kind of federal insurance. The backlash, the attempt to take back abortion rights,  began by targeting the poorest and most vulnerable and slowly closing the door to access.

We learned that a part of the struggle for the right to abortion is ending forced sterilization.

We learned that abortion is not a single issue. It is tied to the right to have and raise healthy children and having the means to do so. This includes the right to decent, affordable housing, to nutritious food, to good schools. It includes immigrant rights and healthcare. It’s part of a framework called reproductive justice. With this framework we can unite all women and fight for all of our rights.

We certainly made gains. From 1965-1979 women won over 60 legal acts favorable to gender rights, including six Supreme Court decisions.  Many feminists were also part of the Civil Rights and the anti-war movements of those times. These struggles made gains too. They brought U.S. soldiers home from Vietnam. They won seven civil rights and voting rights acts from 1957 to 1991.

Many of us thought things would get better and better.

Why? We thought we had won the war, but we had just won a few battles. This was because we hadn’t learned who and what our enemy really was.  It wasn’t men, it wasn’t the patriarchy. It was a particular form of the patriarchy called capitalism. We didn’t know that capitalism was a predatory social system that just waits until it can take back social and economic gains won in the streets.

So here we are today, fighting again in the streets for abortion rights; fighting a new form of Jim Crow called mass incarceration; fighting U.S. wars of conquest in the Middle East.

Let’s make this current fight for abortion and a woman’s right to bodily autonomy be the opening shot in the war to root out every last vestige of capitalism. Let us fight to replace capitalism with a socialist system run by working class women and men and designed to meet our human needs. Only then can we guarantee that the rights we fight so hard for and so richly deserve can never be taken away.