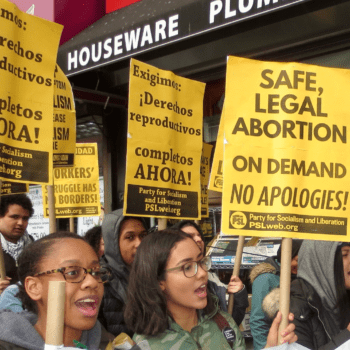 January 22 is the forty-ninth anniversary of the Roe v. Wade decision, in which the Supreme Court ruled that a women’s right to choose to have an abortion falls within the right to privacy protected by the 14th Amendment, making abortion legal nationally. Ever since the landmark 1973 case, reactionary forces have waged a war to reverse this decision by any means necessary. While met with much resistance, the attacks on reproductive rights have eviscerated abortion rights in many places across the country as well as limiting access to birth control and sex education. The attacks have even included the criminalization of miscarriage. Now, it looks like the Supreme Court is poised to severely limit or even to scrap Roe v. Wade once and for all.

In the face of this attack, it is vital not to mistake blows for a defeat. Now is the time to fight back, not to despair.

Abortion rights were won in struggle

The legal right to abortion was not a gift dropped down from the sky.  When it became law in 1973 arch-reactionary Richard Nixon was in the White House and the Supreme Court had a conservative majority. The right to abortion in the United States was won as the result of a long, determined, organized struggle which pushed the courts to legalize abortion.

Responding to the growing movement of the late 60s, states like Hawaii, New York and Alaska began loosening their restrictions on abortion. Prior to Roe, seventeen states decriminalized or legalized abortion, and anti-abortion laws faced challenges in twenty-nine other states and the District of Columbia. On January 22, 1973, the U.S. Supreme Court ruled that a woman’s right to choose abortion was constitutionally protected by the Fourteenth Amendment as part of her right to privacy, and it struck down all existing anti-abortion laws nationwide.

And pursue they did. This major victory for women’s liberation and for reproductive rights was met by a fierce counter-offensive by the right-wing reactionary movement. Within three years, abortion access suffered a major blow when the Hyde Amendment was passed by a bipartisan vote in Congress. The Hyde Amendment, which still stands today, bans the use of federal funds for abortion. It effectively eliminates abortion access for low-income women on Medicaid, women in the military, and women on any kind of federal insurance.

Every subsequent Congress has refused to repeal the Hyde Amendment despite consistent pressure from women’s rights and reproductive justice advocates. In 1980, the amendment was challenged at the Supreme Court, but the Court ruled to uphold it.

The Supreme Court’s 1992 ruling in Planned Parenthood v. Casey was another blow. The Court ruled that a highly restrictive Pennsylvania law, which required parental consent for minors and mandatory waiting periods, was constitutional. Planned Parenthood v. Casey opened the floodgates for a wave of anti-abortion bills in state and local legislatures. Between 1973 and 2015, states enacted over 1,074 anti-abortion restrictions, drastically undermining the rights  granted in Roe v. Wade.

The war on abortion rights

Today the powerful anti-abortion coalition of the religious right reactionary organizations and politicians is waging a hybrid political, legal and propaganda war on abortion. They are largely focused on passing legislation that will erode abortion access in states where they cannot outright eliminate abortion rights. These are known as TRAP laws (targeted regulation of abortion providers). They mandate medically unnecessary requirements, forcing clinics that provide abortions to close, and force people seeking abortions to endure excessive, costly, and violating steps in order to get an abortion.

It should be noted that the attacks have not been limited to abortion rights but center squarely on all aspects of reproductive rights, clearly targeting women’s control over their bodies in many forms. Miscarriage has been criminalized. Access to birth control and scientifically sound health education has been targeted.

Over the past year, GOP-controlled state legislatures have passed a record-breaking 106 abortion restrictions, including a Texas statute that bans nearly all abortions after roughly six weeks of pregnancy.

Much of this legislation is also carefully crafted to elicit constitutional challenges, creating  opportunities for the Supreme Court to reconsider or further weaken Roe v. Wade.

Making the most of this opportunity, the right wing is crafting laws to bring before the Supreme Court to challenge Roe v. Wade. The goal is to overturn abortion rights once and for all.

On Dec. 1, the Supreme Court heard arguments in Dobbs v. Jackson Women’s Health Organization. At issue is whether a Mississippi’s law that would ban almost all abortions after fifteen weeks can go into effect. This is about two months earlier than Roe allows. If the Mississippi law is upheld, it would mean that Roe v. Wade is no longer the law of the land. If the court upholds the Mississippi ban, states will be able to pass their own anti-abortion laws anywhere the Republican Party dominates the state legislature. Twelve GOP-controlled states already have “trigger laws” that will ban nearly all abortions immediately following a court decision to overturn or weaken Roe, and another nine states have written stricter restrictions that could be pushed forward quickly.

As women around the country anxiously await the Supreme Court’s ruling, the real impact of overturning Roe is not of the remotest concern to most of these justices. The establishment media portrays the Supreme Court as an objective body making legal deliberations based on timeless principles of justice. This is just not true. The Supreme Court is an unelected, undemocratic body that is unaccountable to the working class that makes up the great majority of the country, and untethered to the realities of our lives. Its legitimacy needs to be questioned.

While a ruling on the Mississippi law isn’t expected until June, comments made by key Supreme Court justices indicate that the court is likely to return a decision against Roe. But we don’t need to sit back and wait for them to deal us this blow. We already know that each advance for women’s rights in this country, from voting rights to reproductive rights, was won by popular struggle.

The pathway to legalizing abortion once and for all

There is an opportunity now to struggle for abortion rights, which remain popular among a majority of people in the country. We must organize to levy pressure on Congress. They can act immediately to end the tug-of-war over abortion rights once and for all by legalizing abortion. In September, the U.S. House of Representatives passed the Women’s Health Protection Act, which would legalize abortion in a statute equally binding everywhere in the country. All that is needed now is for the Senate to pass it, and the president to sign it.

The Democrats control the House, the Senate, and the White House. If they wanted to respond to the urgent crisis for women in Texas and across the country and push the WHPA through, they could. The Democratic Party, however, is not urgently moving to intervene against the assault on abortion rights and bodily autonomy. Instead, they are opportunistically seizing it as a way to garner donations and votes in midterm elections through voter fear.

The Democratic Senatorial Campaign Committee even tweeted “ELECT DEMOCRATS TO PROTECT ABORTION RIGHTS.” The Democrats did not win our abortion rights and have utterly failed to protect them in the five decades since 1973. The Democrats left the Hyde Amendment intact through four Democratic administrations since 1976, and it was supported by Joe Biden until his 2020 presidential run.

The time is now to pressure the Democrats to move beyond theatrics and pass the Women’s Health Protection Act. As a first step, sign and circulate a petition to demand that Congress pass this act.

The time is now to revive a mass and militant women’s liberation movement to demand abortion as an unassailable right. Roe v. Wade shows victories under even the harshest conditions are possible, but only through unified, coordinated, persistent struggle.