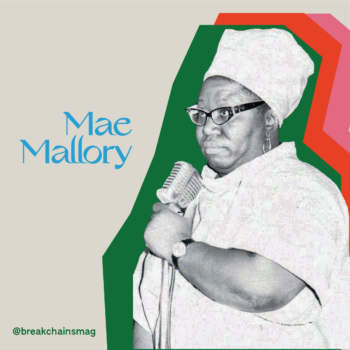 Mae Mallory was born in Macon, Georgia in 1927. As a child, she already refused to accept injustice without a fight. At 12 years old, she moved with her mother to Harlem in search of economic prosperity. They were among the thousands of African Americans who migrated to the North to build new futures. Mae Mallory started her new life in New York as a domestic worker for white families, cleaning their homes for very little compensation. The work was dehumanizing and hyper-exploitative. An upper-class white woman she worked for once told her that having her around was like having a pet. She also worked as a factory worker, and found that factory life was shot through with class and race antagonisms. Black women were often denied factory jobs in the first place. Those who could find work held the lowest paying jobs and were often prohibited from joining unions.The factories were the birthplace of Mallory’s radical political consciousness—she dove headfirst into grassroots organizing, fighting for equal rights for black factory workers in the 1950s.

At the same time that she was becoming politically active, Mae Mallory was also raising two children as a single mother. Her children told her about cramped classrooms, inexperienced teachers and limited resources. She became an education reform activist. Only 3 years after the victory of Brown vs. Board of Education, segregation was far from ended. Mallory made headlines when she stood up at a New York City Board of Education Public Hearing and declared that the schools her children attended were “just as Jim Crow” as the elementary school she had attended in Macon, Georgia. She exposed the many white school officials who prided themselves on being different from their counterparts in the South.

Fed up with her children’s inferior schooling conditions, Mallory attempted to enroll her daughter in an integrated school outside of her neighborhood. The school board blocked the attempt. Mallory joined forces with eight other frustrated mothers and a young Black lawyer named Paul Zuber to sue the City, the Board of Education, and New York State. Their case? Mallory and Zuber argued that the existing zoning policies forced Black children to attend segregated, inferior schools. Mallory served as the spokesperson for the group of mothers who came to be known as the “Harlem 9”, and decried the conditions their children were facing as “educational abuse.” They leafletted and petitioned tirelessly as part of Parents in Action Against Educational Discriminations (PAAED), an organization that boycotted New York City public schools in 1957 and 1958.

The grassroots activism of the Harlem 9 came to a head in 1958. After countless petitions, leaflets and protests, and very little change in the Harlem public school system, the Harlem 9 pulled their children out of school for 156 days. This action was not just an indictment of the Harlem school system, but an indictment of the racist capitalist system that had placed their children in that position. According to scholar Ashley D. Farmer half of all Black women held the lowest paid factory jobs or did domestic work in the 1950s. With their low wages, women like Mallory could only find affordable apartments in areas where racist zoning policies funneled their children to underfunded and overcrowded schools.

The New York City system threatened and charged the Harlem 9. One of the mothers, Mrs. Viola Waddy, asserted that “We will go to jail and rot there, if necessary, but our children will not go to Jr. High Schools 136, 139, or 120.” When the case was finally brought before a New York City judge, the judge conceded that New York City schools were de facto segregated, and ruled that the Harlem 9, and thousands of other parents, had the right to transfer their children to racially integrated schools. The legal victory is thought to be the first win against de facto segregation in the North.

Mallory was committed to the struggle for justice for Black people in the United States. She was an organizer for workers rights, an anti-segregation activist and more. She faced the repression of the racist capitalist state that many Black activists and revolutionaries were subjected to. Mae Mallory befriended the Black radical activist Robert F. Williams and became a strong proponent of armed self-defense, a stance which harkened back to her years growing up in the South. She was also friends with Malcolm X, and was in the Audubon Ballroom when he was assassinated. In August of 1961, Mallory was framed alongside Robert F. Williams for an attempted kidnapping of a white couple while she was traveling to support a Freedom Ride protest in Monroe, NC. She fled to Cleveland and fought extradition to Monroe, choosing instead to serve time in Cleveland. The Monroe Defense Committee formed and organized countless protests to advocate for Mallory’s release from an unjust imprisonment. Mallory documented the harsh conditions she faced in prison, and wrote that, “From what I have read and from personal experience here, only Devil’s Island and the Nazi Concentration Camps can compare with America’s penal system.” The advocacy efforts of the MDC were eventually successful, and Mallory was released from prison in 1965.

Later in life, Mallory fought for the release of other unjustly imprisoned Black activists and remained politically active until her death in 2007. When Mae Mallory pulled her children out of school, she and the other mothers of the Harlem 9 became shining examples of revolutionary love—fighting back against the system not for themselves, but for their children’s futures and the futures of all children marginalized in the New York City school system. They refused to comply with a system that discriminated against their children and themselves. As a result, they broadened the horizons of educational reform in New York City and beyond. Through clever and methodical grassroots organizing, Mae Mallory exposed the racism of the New York City school system as not all that different from the racist segregation that existed in the South. She was best known for this action but lived her life as a fighter for justice, whether in the factories, the schools or the communities. A new world is fought for by those who dare to put their foot down and say “No more!”.