She Who Struggles: Petra Herrera 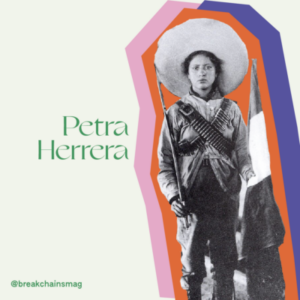 The air of Torreón, Coahuila in Mexico on May 30, 1914, was thick with the smell of gunpowder and blood. In the haze of battle, a brigade of nearly 400 women made their way into the city.  A woman with braids, a sombrero on her head and a bandolier strapped against her chest led the brigade. She dispatched her enemies with remarkable ease and ferocity, using both a gun and knives. Petra Herrera and her brigade took the city. They turned out the lights and plunged Torreón into darkness, ensuring the victory of the Constitutionalist Army.

Most of what is known about Petra Herrera begins with her involvement in the Mexican Revolution. She joined the military in her mid-twenties by disguising herself as a man named Pedro Herrera. Women were commonly involved in the resistance efforts during the Mexican Revolution, but intense sexism tried to keep them out of the military. Thus, Petra Herrera had to disguise herself.

Herrera was an impressive fighter with a penchant for blowing up bridges.  Once she was established enough within the army, Herrera took out her braids and began serving under her real name. During this time, she was promoted to captain, then general, and led a brigade of 200 men.

However, Pancho Villa refused to acknowledge Herrera’s service. He ousted her from the Villistas. Undeterred, Petra Herrera initiated a women-only military brigade. Sexism had no shelter under Herrera’s watch. She permitted no man to stay the night when she set up camp with her female soldiers, and she fired at any man foolish enough to try to come near them under the cover of darkness. During a time when women were not even considered full citizens in Mexico, Herrera’s military involvement was revolutionary and inspiring. This brigade of women played an integral part in Pancho Villa’s victory at the Second Battle of Torreón, although he once again refused to credit them.

Petra Herrera was one of many women who served in military capacities in the Mexican Revolution. In Soldaderas in the Mexican Military: Myth and History, Elizabeth Salas writes about a time when another woman named Petra, who also disguised herself as a man and adopted the name Pedro, saved a young girl from being raped by other soldiers. Petra Ruiz demanded to “have” the girl, and the other soldiers, afraid of confrontation with their cantankerous peers, handed her over. As soon as they were out of sight, Ruiz released the girl unharmed. Women played an important, but often unrecognized or explicitly negated, role in the revolutionary era.

Petra Herrera’s legacy like many other women remains undercovered in the pages of history books. Petra dedicated nearly the entirety of her short adult life to advancing the struggle of the Mexican Revolution. When she left the military, she volunteered to work as a spy for future president Venustiano Carranza and worked as a bartender in Chihuahua. One night, a group of drunken men insulted Herrera and shot her three times. While she survived the initial attack, she later died of her wounds.

Petra Herrera was a woman who refused to let sexism define her revolutionary contribution and was determined to serve the advancement of her country. She recruited other women to join her in destroying the patriarchal expectations of the roles women played in the Mexican Revolution and defended their rights with both wily tactics and bullets. Her accomplishments have withstood the test of time, despite the attempts of men to erase her work from history.