She Who Struggles: The Night Witches 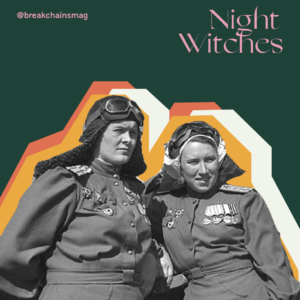 During World War II, three modified crop-dusters took off under the cover of darkness, their engines whirring noisily as they approached their targets, a German military camp. Strapped under each wing of the crop-duster was a bomb, soon to be dropped on Nazi forces. Weighed down by cargo, one plane swooped in low and as it approached the Germans the pilot killed her engine. German soldiers nervously scanned their radar and infrared locators, but the planes were too small to show up on the screen. There was a deafening silence, and then a gentle whoosh as the wind whistled through the wood of the aircraft. Then, chaos, as bombs dropped on the camp and lit up the night with explosions. Unburdened now, the plane climbed higher and higher into the safety of the sky and rejoined the other two planes, which had served as diversions. The aircrafts were helmed by three steadfast pilots, the women pilots of the 558th Night Bomber Regiment of the Soviet Air Forces.

In total, the 588th Night Bomber Regiment of the Soviet Air Forces flew over 20,000 sorties and dropped over 3,000 tons of bombs during the war. The regiment was founded by Marina Raskova, the Soviet Union’s first female navigator who was also known as Russia’s “Amelia Earhart” for her record-setting long distance flights. As World War II claimed the lives of countless women’s sweethearts and brothers, Raskova began to receive letters from Soviet women who wanted to serve as pilots and gunners. Raskova decided to petition USSR premier Joseph Stalin for the opportunity to create an all-female air force unit. On October 8, 1941, three all-female air force units were ordered deployed. The order made the Soviet Union the first nation to allow women to participate in combat during war. On June 12, 1942, the 588th Night Bomber Regiment, the only air force unit that remained entirely female, flew their first sortie and wrote the first lines of their place in the pages of history.

The women of the regiment possessed both tremendous bravery and resourcefulness. Due to a limited number of modern airplanes, the women had to fly biplanes that were predominantly used for crop-dusting and training, not aerial combat. Because the planes were made of plywood, they were highly flammable, leading some members to call them “coffins with wings.” After strapping on one bomb under each wing of their planes, the pilots were forced to fly low to the ground without parachutes, so they traveled under the cover of night. Not only that, the planes lacked modern navigational equipment, which meant that the pilots had to find their way to their objectives by using maps, compasses, stopwatches, pencils and flashlights.

That Nazi forces named the 588th Night Bomber Regiment “Night Witches” is a testament to their very real fear of these women and their tactical might. There is a long history of colonial and imperialist forces characterizing women who resist as “witches.” The Regiment was unperturbed and proudly adopted the name. The German soldiers gossiped that the Soviets were medically treating the women pilots so they could have night vision, among other sexist rumors. Nadezhda Popova, a regiment fighter who flew 852 missions, earning multiple medals and the title Hero of the Soviet Union, said, “This was nonsense, of course. What we did have were clever, educated, very talented girls.”

Despite facing what many would consider insurmountable hurdles, the female pilots used the planes to their advantage. Because they were made of plywood, the planes could not be tracked on radar systems and were highly maneuverable. The pilots could take off and land anywhere, which allowed them to get incredibly close to enemy lines. The German forces attempted to foil the nightly raids by beaming searchlights in areas where they thought the women would fly. However, the Night Witches were prepared – they flew in groups of three, and two pilots would fly through the lights and then veer off in different directions, while the third would fly towards the target and drop the bomb. The women would fly multiple sorties in one night, drop bombs, fly off, and return to drop even more bombs on the enemy. Through skill and grit, the women dodged enemy fire and rained terror upon Nazi forces, denying them any hope of a peaceful sleep. In total, the Night Witches damaged or destroyed 17 river crossings, nine railways, two railway stations, 26 warehouses, 12 fuel depots, 176 armored cars, 86 prepared firing positions, and 11 searchlights. They also performed 155 supply drops of food and ammunition for Soviet Forces. No matter the situation, these heroic pilots were defiant in the face of adversity and served all the way to the end of World War II. Their courageous exploits on the frontlines against fascism remain an inspiration to us all.

To the Night Witches, ¡presente!