She Who Struggles: Winnie Mandela 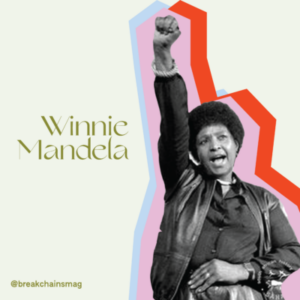 In 1986, the people of Soweto, a South African township, mourned a victim of the South African state’s violent crackdown against the anti-apartheid movement. Wearing yellow and green uniforms, individuals solemnly dug a grave as others sang and wept at the brutality of the state. The air was heavy with grief when a woman clad in purple stood up and cried:

“Apartheid is a criminal act! The white man has the audacity – he is three and a half million, we are 30 million! The regime can go to hell – power to the people!”

The crowd erupted into cheers, newly invigorated by the fire of righteous anger. The woman that cried out was freedom fighter Winnie Madikizela Mandela, whose charisma and militancy were key to the South African anti-apartheid movement.

Winnie Madikizela Mandela was born on September 26, 1936, in rural South Africa. Her father was a school principal who raised her with a sense of justice and taught her about the history of settler-colonialism and apartheid. That political education shaped the person she became. She met and married Nelson Mandela at 22 years old when she was working as a social worker and he was raising money for the African National Congress.

Winnie dedicated the rest of her life to the anti-apartheid struggle as a militant member of the ANC. When Nelson was imprisoned in 1963, Winnie refused to go into hiding. In defiance of the brutal apartheid regime, she dared to be outspoken, explicitly socialist and explicitly anti-apartheid. Because of her revolutionary activity, Winnie was constantly subjected to arrest, imprisonment, and surveillance. She described the untold violence of the South African apartheid regime in a memoir:  “They honestly believed that it was impossible for a [B]lack woman to have this kind of stamina, to be this stubborn. Because they were meant to break us and they could not believe that anyone would resist them like that?… We were the cannon fodder, we were the foot soldiers, we were vulnerable, and we were exposed to the viciousness of apartheid.” Her longest period of imprisonment was 491 days, during which she was tortured and subjected to solitary confinement. Angered by her defiance and afraid of her resolve, the head of South African State Security vowed to “destroy” Winnie. She was banished to Brandfordt, whose residents were warned not to speak to her because she was a communist. All these were designed to break her spirit; Winnie was expected to rot in exile, forgotten by the South African people.

This was not to be. In Brandfordt, Winnie continued the struggle, hiding guns for the ANC and recruiting soldiers for Umkhonto we Siezwe, the armed wing of the ANC. She also enriched the community of Brandfordt while in exile. She created a clinic in collaboration with Dr. Abu Baker. She worked with the NGO Operation Hunger to organize a childcare center. In exile, Winnie would fearlessly wear the black, green, and gold of the ANC, black to symbolize the people of South Africa, green to represent the land, and gold to represent the mineral and natural wealth of South Africa. Former ANC member Dali Mpofu said of Winnie, “If any one of us had dared to do what [Winnie] was doing, we would have prepared to leave the country on the same day.”

Instead of being forgotten as the South African regime had hoped, she was visited by Robert Kennedy and was catapulted to international attention as a significant political figure. Winnie’s defiance and composure in the face of what seemed like impossible circumstances came from her unshakeable commitment to ending apartheid. In a 1980 interview, when asked whether she would pick up a gun to fight for freedom, she responded without hesitation, “Now I know I can… When I saw the children being mowed down in Soweto in 1976, I realized that in order to defend [them], I would do exactly the same.” Her determination and fire drew international support for ending apartheid. She worked tirelessly for Nelson Mandela’s release, which came to fruition in 1990.

In the post-apartheid years, Winnie was vilified by the official Truth and Reconciliation Committee which investigated human rights abuses “on both sides.” The military tactics and strategies she developed in response to the unspeakable violence of the South African state were denounced as a “reign of terror.” She and Nelson divorced in 1992. The following year, Nelson accepted the Nobel Peace Prize along with Prime Minister F.W. de Klerk, a white supremacist who authorized the brutal repression of the anti-apartheid movement for many years. Winnie Mandela was largely sidelined from ANC post-apartheid politics.

Nevertheless, Winnie never fully lost the love of the Black South African people. In 1993 and 1997, she was elected president of the ANC Women’s League, in 2007 she received the most votes to be elected to the ANC National Executive Committee, and in 2009 she was the fifth most voted-for member of Parliament. She served until her death on April 2, 2018. She will always be remembered as a hero deeply connected to the grassroots and the poor, and her supporters called her the “Mother of the Nation.” Winnie’s long struggle against apartheid remains an inspiration to fight for what is right and just, no matter how insurmountable the obstacles may seem. In the words of her daughter Zindzi Mandela, “Some people come in and out of history, but [Winnie] was a constant.”