Supreme Court Declares War On Women and Abortion Rights — Take to the streets! 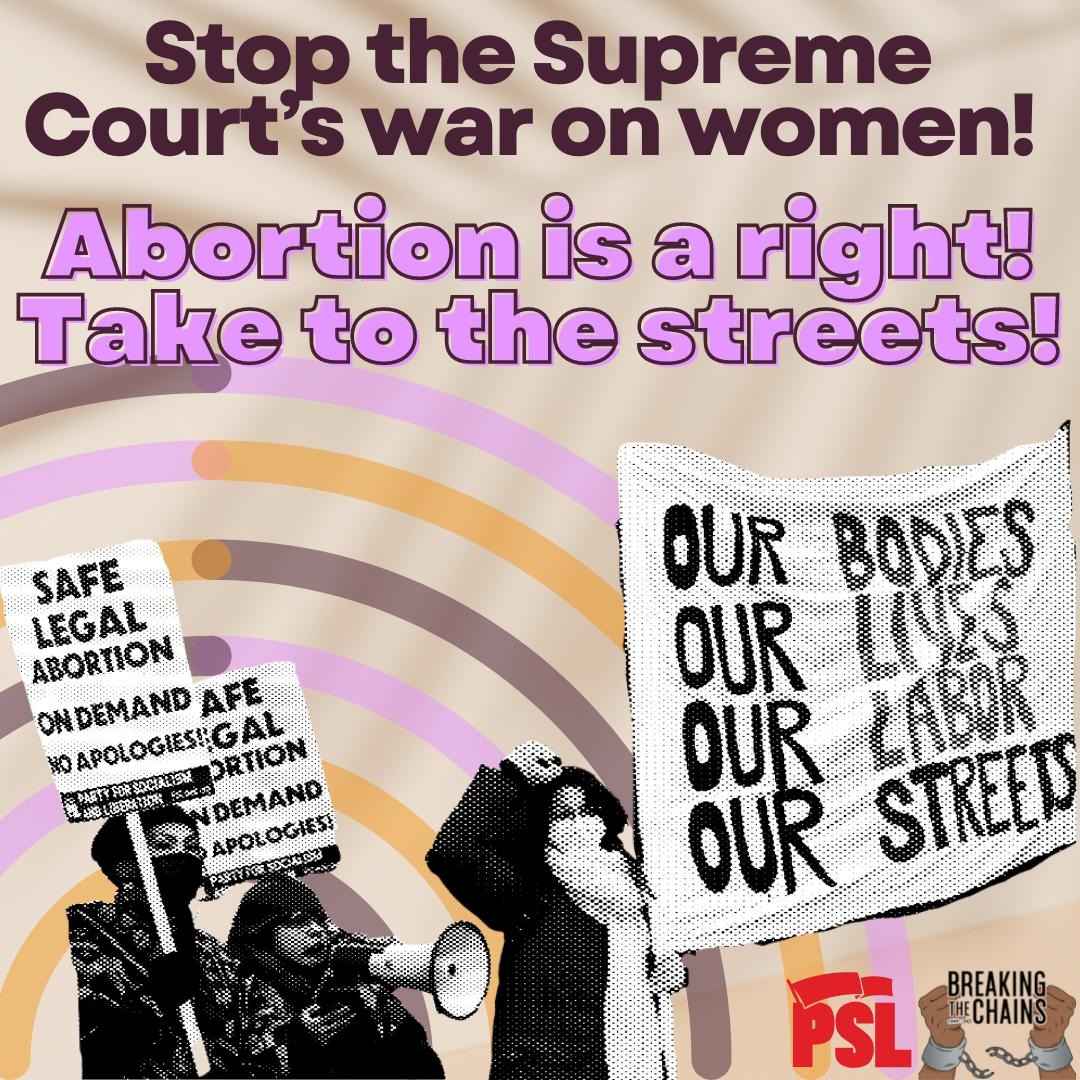 The Supreme court has declared war against women and our basic rights to control our own bodies. Now is the time to fight back. Millions of people going into the streets would make it clear that without justice there can be no peace.

A heroic individual has leaked to the public the decision by the Supreme Court to end abortion rights by overturning the Roe v Wade decision, and the earlier Casey decision.

Neither the church nor the state has the right to tell women what we can do with our own bodies.

The Supreme Court has demonstrated throughout history that it is an enemy of democracy and an enemy of people’s rights. It upheld slavery as a legal institution until the Civil War ended it. It made apartheid and segregation the law of the land in 1896 and today it is attempting to end abortion rights that were the consequence of the mass movement of millions of women and their allies in the 1960s and early 1970s. The Supreme Court today is also taking back voting rights for Black Americans, human rights for immigrants, and union rights for workers. Until the mass movement of the LGBTQ community forced the Supreme Court to change, it denied marriage equality and other basic rights.

The Supreme Court should be abolished. Nine unelected judges, appointed for lifetime terms, should not have the discretion to eviscerate the rights of hundreds of millions of people in the United States. This institution makes a mockery out of the notion of a democratic society.

Now is the time to fight back. Only a mass movement of the people can save abortion rights. Take to the streets throughout the United States.

Background to the decision

Amidst a barrage of attacks on women’s reproductive rights, the Supreme Court intends to overturn Roe v Wade.

This decision has not come without forewarning. States have continuously attacked reproductive rights in the leadup to this vote, including through the passage of the infamous Texas SB 8 bill. For decades, right wing forces have brought one unconscionable abortion ban after another hoping to provoke the overturning of abortion rights.

This landmark decision has been looming in the horizon with enough time for the Democratic Party, enjoying majority control of both the Senate and the House, to have passed the Women’s Health Protection Act (WHPA). The passage of the WHPA would have legalized abortion once and for all, guaranteeing the right to choose for women in the United States.

The draft opinion, which digs deep into sexist and racist ideology, goes on to describe abortion, a crucial component to women’s healthcare, as a “rancorous national controversy.” This callous treatment of an often life-saving healthcare procedure is outrageous!

In reality, the majority of Americans have consistently supported Roe v Wade. In fact, a recent 2022 poll found that 72% of respondents were opposed to overturning the ruling. The US government is well aware of this fact, evidenced by the fence wall that is being built around the Supreme Court just as it prepares for all out war on women’s rights. These statistics shed a harsh light on the fact that despite their wishes, the essential reproductive rights for 166 million women in the United States are in the hands of 9 undemocratically appointed Supreme Court Justices, 6 of whom are men.

This is a walkout moment. It is clear that there is popular support for women’s right to choose, and it is even more clear that we will never be able to secure this right unless we take to the streets. The elitist Supreme Court is threatening a war on women’s rights and the only force capable of putting a stop to them is the people of the United States mobilizing and organizing to defend our rights.