The legacy of Vietnamese women in the national resistance struggle 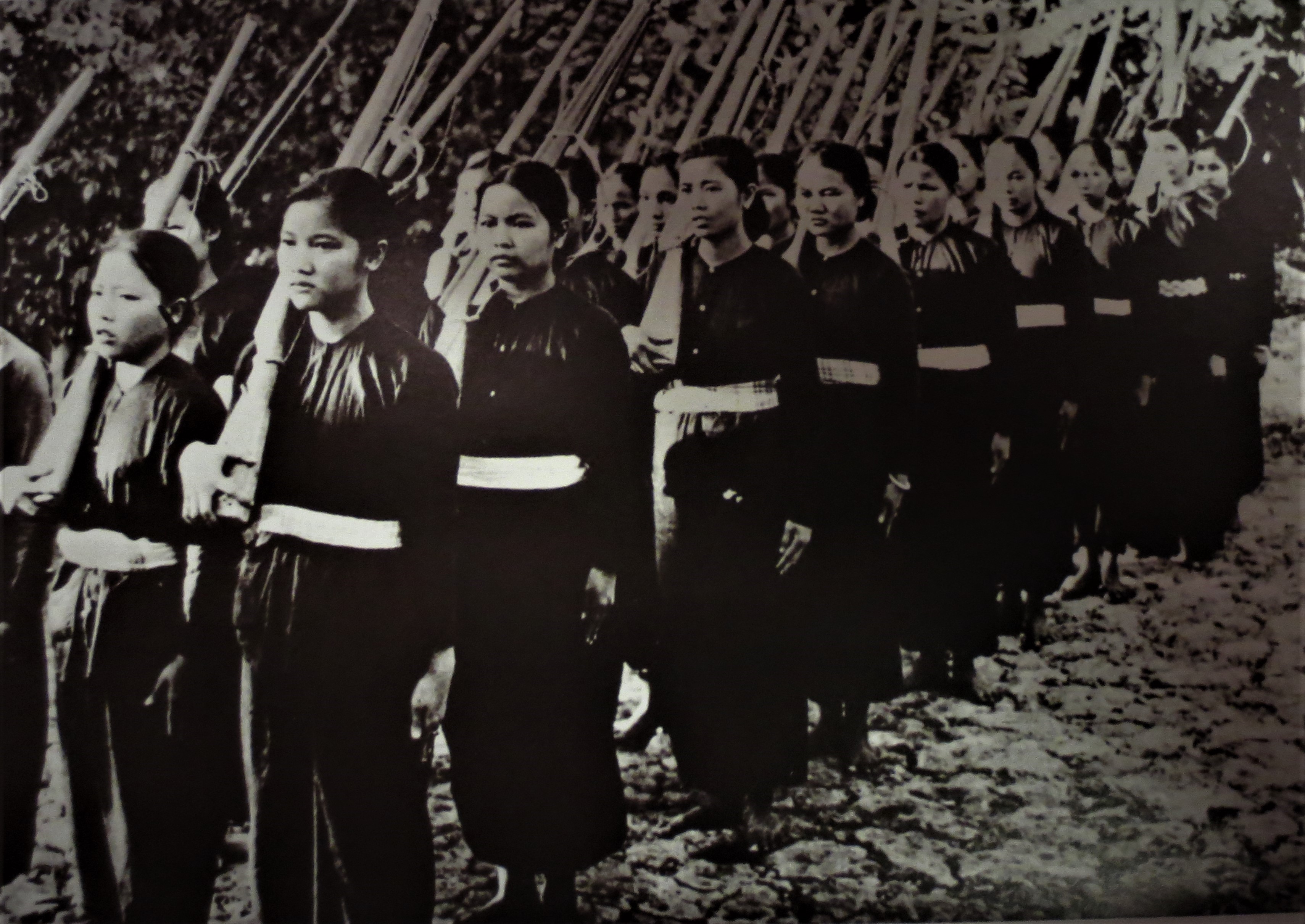 “Reduce rents and interest rates!
Equal wages for equal work!
No dangerous work for women!
Two months fully paid maternity leave!
Down with forced marriage!
Down with polygamy!
Abolish the habit of holding women in contempt!”

Within two months in a town, in Muong Thanh Valley of northwest Vietnam, anti-imperialist Vietnamese fighters besieged and defeated over 16,000 French colonial troops and spelled the downfall of the French empire. Dien Bien Phu was one of the greatest victories of the oppressed in all of history and inspired revolutionaries and progressives around the world. We cannot understate this victory and we cannot understate the central role women played.

Women have always been in the struggle in Vietnam and often were at the forefront in the resistance against the French that culminated in Dien Bie Phu. Without the central and leading role of women, the fight for national liberation against the French would not have been victorious.

There is a long-standing tradition of women’s resistance in Vietnam. A story retold over centuries through word-of-mouth recounts the Trung sisters’ insurrection against Chinese invaders in 40 A.D. The sisters, Trung Trac and Trung Nhi, sought to gain the confidence of their people. Trung Trac, the eldest sister, killed a tiger in the region that had been rumored to be an invincible killer to prove she had the courage to be a military leader. After killing the tiger, she wore the tiger’s skin to convince others to follow her against the Chinese. The sisters called for all people to lead the insurrection together and trained 36 women to be generals in the insurrection. These women then led an army of 80,000 that succeeded in driving the Chinese out of Vietnam. Although the Chinese ultimately defeated the Vietnamese, the fighting spirit of the Trung sisters continue to inspire a Vietnamese national identity of resistance.

Women leading struggles against Chinese invasion became so routine, that the saying “when the enemy comes, even the women have to fight” emerged. Patriarchy still influenced how this history was retold, which is why it is fundamental to explain that women’s culture of resistance was maintained through oral history. The retelling of women’s history inspired women century after century to fight against feudal lords, French colonizers an ultimately the U.S. military.

In 1884, after 40 years of war and plunder, the French established themselves in Vietnam and artificially divided the nation into three “countries.” The French occupation was notoriously inhumane and barbaric.

The first Vietnam Women’s Union formed in 1930 with the support of the Indochinese Communist Party (ICP) under the leadership of Ho Chi Minh. The ICP incorporated the struggle for women’s liberation as part of it fundamental goals of defeating French imperialism to gain national independence and in the overthrow of feudalism to gain land for peasants. Many of the women ICP members were also leaders of the Women’s Union which operated as a separate organization to concentrate on women’s rights while also supporting the ICP’s goals. The Union organized both peasants and women factory workers and united their struggles i demonstrations and strikes against French colonists. In 1930, strikers at a rubber plantation disarmed the local French soldiers, created roadblocks with trees while peasants supplied strikers with materials. During these actions, women who had been raped by French Foreign Legionnaires blinded their rapists. Heavy French repression forced the Women’s Union to function as a clandestine organization.

The repression, however, did not stop women from organizing and resisting. Nghe Tihn Soviets, peasant administrations formed after French functionaries fled due to peasant insurrections, held local power for a brief time in two Vietnamese provinces. The Soviets gave women land, political education classes and a place in public meetings. After the French bombed the Soviets, more women joined the Women’s Union to continue the fight for women’s liberation and against colonialism. Women cadre also continued recruiting into the underground organization in socially acceptable events like weddings and funerals. Repression was so strong that women had to remain completely anonymous, covering their faces, and meeting at night.

In the war for national sovereignty against the French, women continued
to play a critical role. The Viet Minh, a united front of many groups fighting against Japanese and French invasion, formed in the early 1940s allowing for women to participate in armed struggle. The Vietnamese Women’s Museum in Hanoi explained that nationally over 980,000 women participated as guerrilla forces with “Hoang Ngan in Hung Yen province hosting the largest group including 7,365 women members. This group fought 680 battles, destroyed 13 enemy posts, 16 kilometers of telephone lines and killed or arrested 383 enemy soldiers.” In addition to fighting, women cared for soldiers, resupplied troops and kept finances and food in order. Between 1950 and 1954, women donated 9,578,000 work days to the
transportation of food and arms — 2,381,000 of those days were just for
the Dien Bien Phu campaign. During the war years for national independence (1946-1954), the new Women’s Union that emerged in 1946 grew to include several million members.

On May 7, 1954, after 55 days of fighting, the Vietnamese army completely destroyed the fortified French stronghold, Dien Bien Phu, which had been considered impenetrable. Commander-in-Chief of the Vietnam People’s Army, Vo Nguyen Giap, directed the battle and forced 10,000 French troops to surrender. The defeats proved catastrophic for French colonialism not only in Vietnam.

The defeat also paved the way for the Vietnamese people’s effective resistance against U.S. imperialism. As General Giap explained in an interview 50 years later: “the victory at Dien Bien Phu and the resistance war against the French gave our army and people the basis, theory, experience and confidence to defeat the American aggressors and bring the 30-year-long liberation war to a victorious end.”

When the Vietnamese defeated the French at Dien Bien Phu, the United States was paying for 80 percent of France’s military costs. The Geneva Accords, signed shortly after, recognized Vietnam as an independent and sovereign nation, forced France out of Vietnam, and temporarily divided the country at the 17th parallel to allow for “peaceful disarmament” from Viet Minh soldiers in the North and French soldiers in the South. The Accords also called for an election and reunification in 1956. The United States, however, refused to sign and instead funded the Diem regime below the 17th parallel. This maneuver laid the groundwork for direct U.S. intervention in Vietnam and eventually the full scale occupation and war in 1966.

Dien Bien Phu marks the greatest defeat of a colonial empire in the history of the world. It is a victory that, as General Giap said, “became a source of pride and confidence for oppressed peoples and a source of encouragement and inspiration for the anti-colonialist movement around the world.” It is the culmination of what an organized revolutionary communist party can do when it is seasoned and rooted in the people. The Indochinese Communist Party felt the pulse of the people and organized the resistance, including giving rise to the Women’s Union that played a crucial role in the armed and unarmed resistance against the French. Generation after generation of women in the same village, in the same family, had bee trained to fight, resulting in resistance becoming part of the consciousness of Vietnamese women. These women carry a legacy of struggle dating back thousands of years, a legacy indispensable as the Vietnamese people struck one of the biggest blows to the U.S. empire twenty years later during the Vietnam War.

Join us in the fight for reproductive justice and learn more about the work the PSL is doing to demand safe, accessible and affordable reproductive care, from birth control to abortion on demand:

Party for Socialism and Liberation@pslweb·
16 Jan

DEFENDING ROE: The battle for women's rights and reproductive justice

Join us in the fight for reproductive justice and learn more about the work the PSL is doing to demand safe, accessible and affordable reproductive care!

Attacks on abortion clinics like the New Year's Eve arson attack in Knoxville interrupt services and intimidate prospective patients. These acts of domestic terrorism are part of, not separate from, the full-scale attack on reproductive rights: