The war on abortion Reproductive rights: past to present 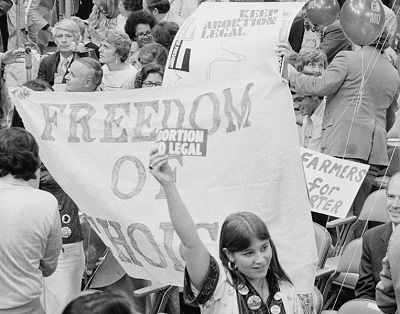 Ever since the landmark 1973 case Roe v. Wade established safe and legal abortion as our right, reactionary forces have sought to reverse this decision by any means necessary.

As revolutionary socialists and feminists, we must prepare for the long uphill battle in defense of reproductive rights. Abortion is health care and health care is a human right. It is crucial that we understand the history of the struggle for reproductive rights, including abortion and access to birth control in the United States, so we can learn from its victories as well as its failures. As right-wing reactionary forces coordinate an increasingly draconian campaign against Roe v. Wade, we must be unwavering and uncompromising in the struggle for reproductive rights, and the liberation of women and all oppressed people.

Across space and time, women have always been active participants in their own health and have found ways to control their reproduction. In currents of western history as early as the 13th century, women healers who mostly served the impoverished northern European peasantry were accused of witchcraft by the feudal ruling class represented by the church and state. In 1484 Reverends Kramer and Sprenger wrote the “Malleus Maleficarum,” or “Hammer of Witches,” considered to be the authoritative guide on witch hunting. They accused “witches” of giving their fellow women contraceptive aid and abortion services. To Kramer and Sprenger’s credit, they were correct that women healers over 500 years ago possessed the medical know-how to provide abortion procedures. They were obviously incorrect in attributing this medical knowledge to satanic powers. “Witches,” midwives and the other women healers who served the poor notoriously used empirical research to test various non-intrusive and preventative measures, such as mild herbal remedies, while also providing emotional care and nursing to their patients.

In the United States, abortion was widely practiced before the 1880s, at which point it was outlawed in the majority of states. These early abortion bans were a reaction to the growing feminist mobilizations, particularly the women’s suffrage movement. By denying women the right to birth control, the ruling class could prevent their social mobility and popular resistance. Additionally, declining birth rates among white northern Europeans fueled racist fears about “race suicide”. Early eugenicists demanded that white women continue to reproduce in order to maintain demographic and institutional white supremacy.

Birth control or population control? Fighting racism and eugenics with a socialist orientation

An examination of Margaret Sanger’s life and legacy provides important lessons for the feminist movement today — namely, that an anti-racist and socialist orientation is necessary to ensure that the movement for women’s health truly fights for birth control and not population control. This lesson becomes ever more crucial with the threat of climate catastrophe when the ruling class points to growing population rates in the Global South to obscure the reality that the true driver of climate change is capitalist overproduction.

Margaret Sanger was a women’s rights activist credited with the popularization of the term “birth control.” In 1921, she founded the American Birth Control League, a precursor to today’s Planned Parenthood. The first phase of her birth control movement became associated with labor militancy, where she found support from comrades in the Socialist Party and the Industrial Workers of the World, including Eugene Debs, Elizabeth Gurley Flynn and Lucy Parsons. However, Sanger eventually began to underestimate the centrality of capitalism in the exploitation of women workers. When she resigned from the Socialist Party, she and her movement became even more susceptible to the anti-Black and anti immigrant rhetoric that fueled the growing eugenics movement. White supremacist and eugenic theorist Lothrop Stoddard was offered a seat on the ABCL’s Board of Directors. Sanger began to advocate for “mental defectives … illiterates … unemployables, criminals, prostitutes and dope fiends” to be forcefully surgically sterilized. This moment in the birth control movement represented the triumph of racist reaction over a truly progressive trajectory.

Like abortion, birth control is an essential part of reproductive healthcare. The women’s movement had to fight for access to birth control and won it in 1972, the year before Roe v. Wade decision, but the struggle to maintain our rights has never ended. Under the Obama administration, a set of restrictions were enacted to access the morning-after pill, which women’s organizations later overturned through legal challenges and direct action.

Abortion by any means necessary

Before Roe v. Wade, anyone who wished to terminate their pregnancy had few options. More than 1 million women had secret abortions every year in the time before the 1973 ruling. Those with ample means could sometimes seek an expensive and illegal but safe abortion from a skilled physician, or travel abroad for their procedure. Working class women, however, had to resort to more drastic means. Some attempted to self-abort using home remedies and dangerous methods, such as ingesting or douching with chemicals and toxins including turpentine, whiskey, bleach, lye and gunpowder. Many used tools such as coat hangers, knitting needles, scissors, or would throw themselves down stairwells to induce miscarriage.

Poor and working-class women often sought abortions performed by people with little training and ulterior motives, known colloquially as “back-alley butchers.” In order to find a clandestine abortion provider, one had to follow a trail of tips from strangers, any one of whom could be a liar or a snitch. Often, pregnant clients were blindfolded and driven to remote areas, unable to see where they were or who was performing the abortion. Men who provided back-alley abortions often sexually exploited their clients by “trading” abortion for sexual gratification. They sometimes offered a discount if clients brought a family member or friend with them during the procedure, because they would feel less empowered to report the illegal provider to the police if it would implicate their loved one as well as an accomplice to the crime.

In the 1960s, nearly 200 people died and thousands more were injured every year from unsafe, self-performed abortions. The mortality rate for Black and Hispanic women was 12 times higher than that of white women. Those who survived often suffered serious and permanent injury or illness for the rest of their lives.

Roe was not a gift from above, delivered on a silver platter. The right to abortion in the United States was won through protracted and militant struggle. Feminists and workers organized speak-outs, pickets, referral networks, and underground abortion clinics. Emerging coalitions linked the fight for abortion with demands for equal pay, free childcare and community control of medical institutions. Inspired by the struggles and successes of the civil rights movement, women picketed, marched and lobbied against the patriarchal system, including the reactionary, right wing restrictions on abortion. Speak-outs were powerful tools by which women organized their own public testimonies about their illegal abortions. In March 1969, 300 people showed up to the first speak-out in New York City. Thousands of similar events were organized in hundreds of cities. These speak-outs put pressure on lawmakers and judges while popularizing the reality of the struggles and demands of the reproductive rights movement. Women everywhere from all backgrounds now knew they were not alone in seeking abortions and should not feel ashamed for their choice.

Slowly, states such as Hawaii, New York and Alaska began loosening their restrictions on abortion. While privileged women flocked to these states to seek abortion procedures, working women — predominantly women of color —could not afford these long-distance trips, and continued to struggle for universally-accessible abortion services. Before Roe, 17 states had decriminalized or legalized abortion, and anti-abortion laws had been challenged in 29 other states and the District of Columbia. On Jan. 22, 1973, the U.S. Supreme Court ruled that a woman’s right to choose was constitutionally protected by the Fourteenth Amendment, and struck down all existing anti-abortion laws. It seemed that the tides were finally starting to turn.

The taste of victory in 1973 was short-lived. In 1976, Congress passed the Hyde Amendment which banned the use of federal funding for abortion services. The Hyde Amendment was devastating for working women, many of whom rely on Medicaid for health insurance, which is heavily funded by the federal government. In 1980, the Supreme Court narrowly decided to uphold the Hyde Amendment. The next major attack came in 1992 when the Supreme Court ruled in Planned Parenthood v. Casey that a highly restrictive Pennsylvania law that required mandatory waiting periods, parental consent and biased information was, in fact, constitutional. Planned Parenthood v. Casey opened the floodgates for a wave of anti-abortion bills in state and local legislatures. Between 1973 and 2015, states
enacted over 1,074 anti-abortion restrictions, severely undermining the freedoms granted in Roe v. Wade.

Moreover, in the 1980s, anti-abortion measures were embedded into U.S. imperialist foreign policy. In 1984, Ronald Reagan introduced the global gag rule which prohibits foreign medical organizations that offer abortion referrals, education and services from receiving U.S. humanitarian aid. Almost immediately upon entering office, Donald Trump reinstated and expanded the global gag rule. This order has severely jeopardized the health and safety of millions of women across the world, particularly in the Global South. The global scale of rightwing attacks on reproductive rights reveals the necessity for the women of the world to unite across borders against their common oppressor — U.S. imperialism.

While it is important to support groups like Planned Parenthood and the Center for Reproductive Rights in their lobbying efforts against anti abortion legislation, appealing to the capitalist politicians will not be enough to defend our rights. We must also prepare for direct action and political education in the fight for reproductive rights. Across the United States, people seeking abortion services are verbally and physically harassed by reactionaries at the doorsteps of clinics. One of the many ways socialists can support the struggle for reproductive justice is by volunteering as clinic escorts, shielding vulnerable people from hateful evangelicals and right-wingers. We can organize speak-outs to popularize a sweeping reproductive rights platform and fight the stigma still surrounding abortion. We must organize sex education, and women’s and LGBTQ health classes. When we know about our bodies, we can take back our power. With the possibility of the overturning of Roe v. Wade constantly looming over our heads, we must brace ourselves for the worst. We must prepare to ensure that abortions are safe and accessible; provide funds for poor and working women to travel, have housing, and not miss rent payments in order to access abortions; and fight to stop the criminalization of women who choose to get abortions.