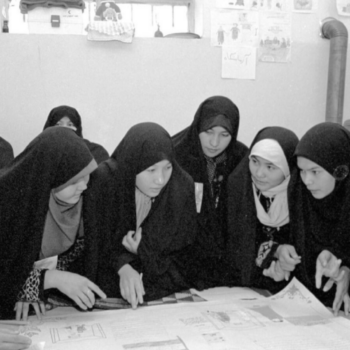 This article was printed in Spring 2021 Vol 6. No. 1 issue “Education to Liberation.” Order your copy here.

The struggle for education is a critical factor in overcoming women’s oppression. But not everyone who advocates for women’s education truly has feminist motives. In reality, the U.S. government has a long record of toppling progressive and independent governments under which women were gaining major expansions of social rights and educational opportunities. Since 2001, the U.S. government has repeatedly seized on the cause of women’s rights to win popular consent for its profit-driven wars in the Middle East. With a disturbing level of success, the United States has utilized feminist rhetoric to sell its wars to the U.S. feminist movement.

In 2001, as the Bush administration was preparing to invade Afghanistan, it capitalized on the plight of oppressed Afghan women, and the terror they faced under the Taliban regime, to win support for the war. The professed mission of rescuing helpless and terrorized Muslim women and imposing so-called democracy became central to legitimizing the “war on terror.” Mainstream feminists applauded Bush for his efforts to rescue Afghan women from the Taliban. The liberal group Feminist Majority even put out a petition thanking the Bush administration for its commitment to bringing rights to the women of Afghanistan. Totally forgotten was the U. S. government’s own role in funding, training and cultivating reactionary forces in order to overthrow and dismantle Afghanistan’s progressive 1978 revolution.

In April 1978, a coup led by the communist People’s Democratic Party of Afghanistan ousted the repressive leader Mohammed Daoud, establishing the People’s Republic of Afghanistan. The new revolutionary government immediately instituted a broad democratic program including full equality for women, major land reform, expansion of public services, price controls, separation of church and state, legalization of trade unions and a sweeping literacy campaign. They emphasized educational opportunities, especially for peasants and women. From 1978 to 1981, public school enrollment went from 5,000 to 600,000 and 19,000 teachers were trained.

But the period of rapid and expansive gains ground to a halt when Afghanistan was thrust into a brutal civil war as counterrevolutionary forces, both foreign and domestic, sought to overthrow the progressive government. The United States threw its weight behind the feudal landlords, warlords and drug traders who wanted to restore the country to its former oppressive rule, launching a counterrevolutionary offensive that lasted 14 years and became the largest CIA operation in history, costing an estimated $6 billion.

The counterrevolutionary coalition destroyed thousands of schools and health clinics; tortured and killed peasants who had been given land by the revolutionary government, as well as school teachers, medical workers, women and children. In 1996, the Taliban — a reactionary group supported by the U.S. government — took power. Among many reactionary decrees, they outlawed schooling for girls and women. Five years later, the U.S. military would seek to oust the Taliban in favor of more stable, loyal rulers. The total hypocrisy of citing women’s suffering as reason for further intervention was lost on many feminists in the United States.

Recycling the tactic in Iraq

Since exploiting the cause of women’s rights proved so successful in Afghanistan, the imperialist politicians and pundits recycled the same tactic to legitimize its 2003 invasion of Iraq. This time images of suffering women and girls in Iraq were plastered all over the media to justify toppling the government. Once again the role the West had played in destroying the quality of life of Iraqi women — through the daily bombing campaigns throughout the 1990s and the genocidal UN sanctions campaign from 1990 to 2003 — was omitted from the narrative.

The campaign against Iraq had nothing to do with women’s or human rights, but rather with the fact that Iraq refused to bow to Western hegemonic interests in the region. Most notably, Iraq committed the cardinal sin of nationalizing its oil fields in 1972, wresting ownership from the Americans, British, French and Dutch who had controlled Iraq’s oil since the territories of the Ottoman Empire were divided up by Western colonial powers after World War I.

With billions of dollars of oil revenue now rightfully in Iraq’s hands, the country was able to develop water and sewage treatment facilities; modernize roads, ports, railways and airports; and extend electrification to many remote areas of the country. Iraq created the best free health care system in the region. The state provided free education through university. The ruling Ba’ath party established the General Federation of Iraqi Women to implement state policy to advance conditions for women. The GFIW established community centers to offer educational, job training and other social programs to women. Laws were passed encouraging literacy for women and men alike. By 1980, female attendance in primary schools rose to 95 percent, up from 34 percent in 1970. By 1990, the Iraqi education system had become the jewel of the Middle East, achieving a famed 100 percent gross enrollment rate and providing free education and materials to students. Many students from Africa and poorer Arab countries received scholarships that covered all expenses to attend Iraqi universities. Iraq educated and trained hundreds of thousands of doctors, engineers, nurses, scientists and other personnel needed to lead and operate a rapidly modernizing society.

These advances were destroyed first by massive bombings followed by 13 years of genocidal sanctions. The 2003 full scale U.S. ground invasion finally broke Iraq’s independence. U.S. military forces seized the great prize of Iraq’s oil fields. Now, instead of funding education, health care and other social programs, Iraq’s oil wealth would fill the coffers of American firms. U.S. forces disbanded the entire government and state apparatus, from the military to the government ministries to the state-run food distribution and health care systems. When most U.S. troops finally withdrew in 2011, they left behind a dilapidated education system wrought with safety concerns, rising costs, and acute shortages of teachers and learning materials.

From the ruins of U.S. intervention arose the Islamic State group, which ruled over significant territories of Iraq from 2014 to 2017, and further diminished women’s rights and opportunities. Today, more than 28 percent of Iraqi women aged 12 years or older are illiterate, with the percentage estimated to be much higher in rural areas, reaching up to 50 percent. Almost 85 percent of women aged 15 and older are not participating in the formal labor force. As a result,
they are at particular risk of poverty.

Women exploited once again to make war on Iran

The experiences of Afghanistan and Iraq ought to completely discredit any imperialist claims of concern for women’s fates. Still today, Americans must be wary of similar narratives being trotted out to win them to the government’s war aims.

Today, Iran stands as the foremost obstacle to total U.S. domination over the Middle East region. In the forty-plus years since the Iranian people rose up in 1979, toppling the brutal CIA-imposed dictatorship of the Shah, the U.S. government has maintained an unremitting hostility towards the country. The Trump administration escalated the drive for regime change, going so far as assassinating Iran’s top military general in January of 2020. Even in the absence of an all-out military war, the United States maintains deadly sanctions on Iran, blocking access to food and medicine even during the deadly coronavirus pandemic. Corresponding with this war drive, Americans are bombarded with a flood of anti-Iran propaganda, including narratives about the suffering of women under the current government.

While women in Iran today still battle reactionary laws, many of them remnants of the prerevolutionary Shah era. The picture painted by U.S. war hawks is a racist caricature. Women in Iran have made great advances under the current government, especially in the realm of education. Whereas before the 1979 revolution, only 36 percent of the female population was literate, and only 17 percent in the rural areas, today the youth female literacy is over 97 percent. In the post-revolutionary years, women have gained increased access to universities — 60 percent
of university attendees are women, and test scores in recent years show women largely outperforming men.

Nearly 70 percent of Iran’s university graduates in STEM fields are women — a higher percentage than in any other country. These are just some of the gains made by Iranian women under their current government, and they are currently struggling for more. War with Iran would decimate this progress and destroy the quality of life of all Iranians, just as it did in Iraq and Afghanistan. The lesson history teaches us is that U.S. warfare is never liberating for women and countering its feminist-sounding war drive must be taken up as an urgent task of the women’s struggle.